In recent years conservation works have been carried out at several medieval church sites , in collaboration with local communities. In each case a conservation team is appointed consisting of a conservation engineer or architect and an archaeologist. This team working with the Heritage Officer agrees a method statement, and obtains consent for the works from the National Monuments Service – this is required for all works at a Recorded Monument. The team then works with the appointed specialist stonemason to carry out the conservation works while respecting the archaeology of the site. This work will continue as funds are available.

Conservation work at Killabban Church in South Laois commenced in 2014 and the local community has driven an ambitious and successful programme of conservation works at this fragile church on the site of an early Christian monastery and a deserted medieval town.  The project archaeologist is Colm Flynn and the engineer is Aoife Murphy of David Kelly Partnership. Masonry conservation in 2019 – 2021 was carried out by Tallis and Co. 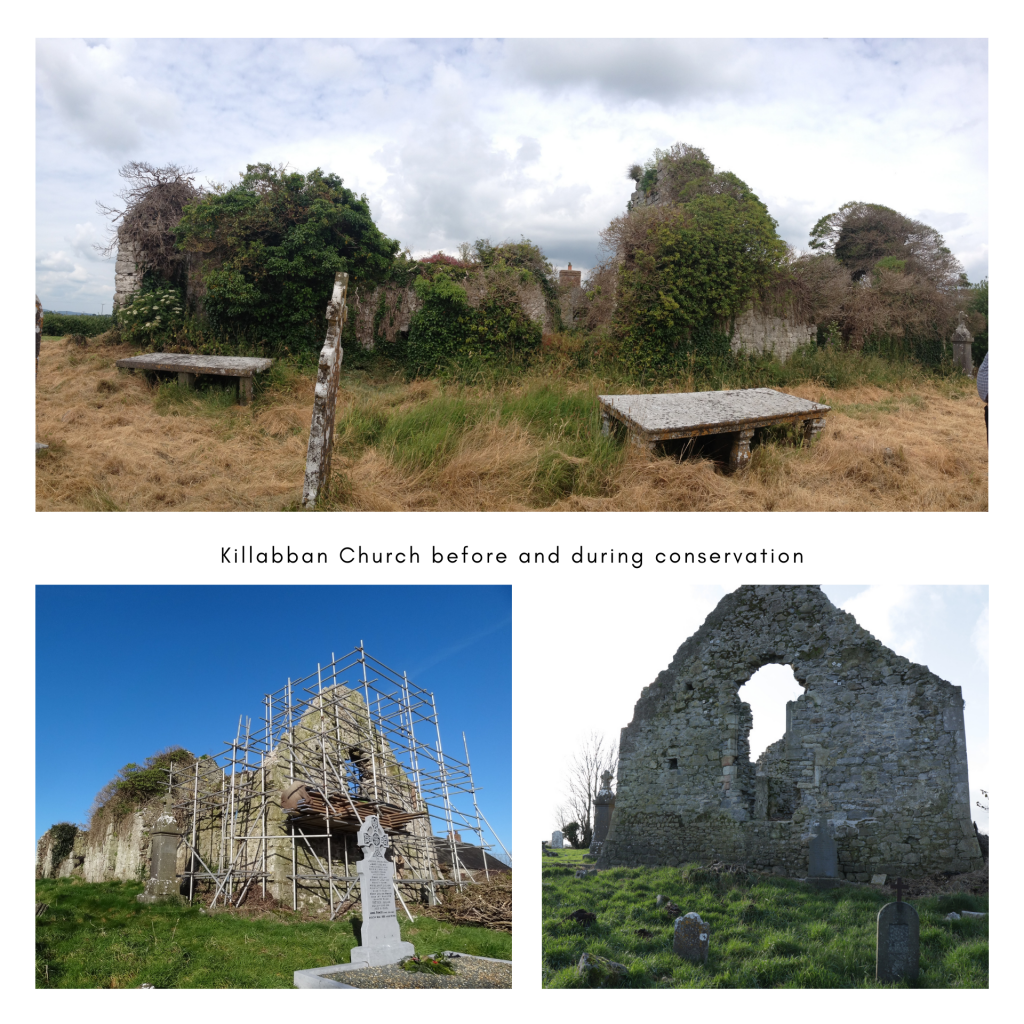 Work commenced in 2015 and a small amount of conservation has been carried out each year since then, with funds from the Portarlington-Graiguecullen MD (supported by Cllr John Moran and Cllr Aisling Moran), from the Heritage Council and from the Community Monuments Fund of the Department of Housing, Local Government and Heritage. 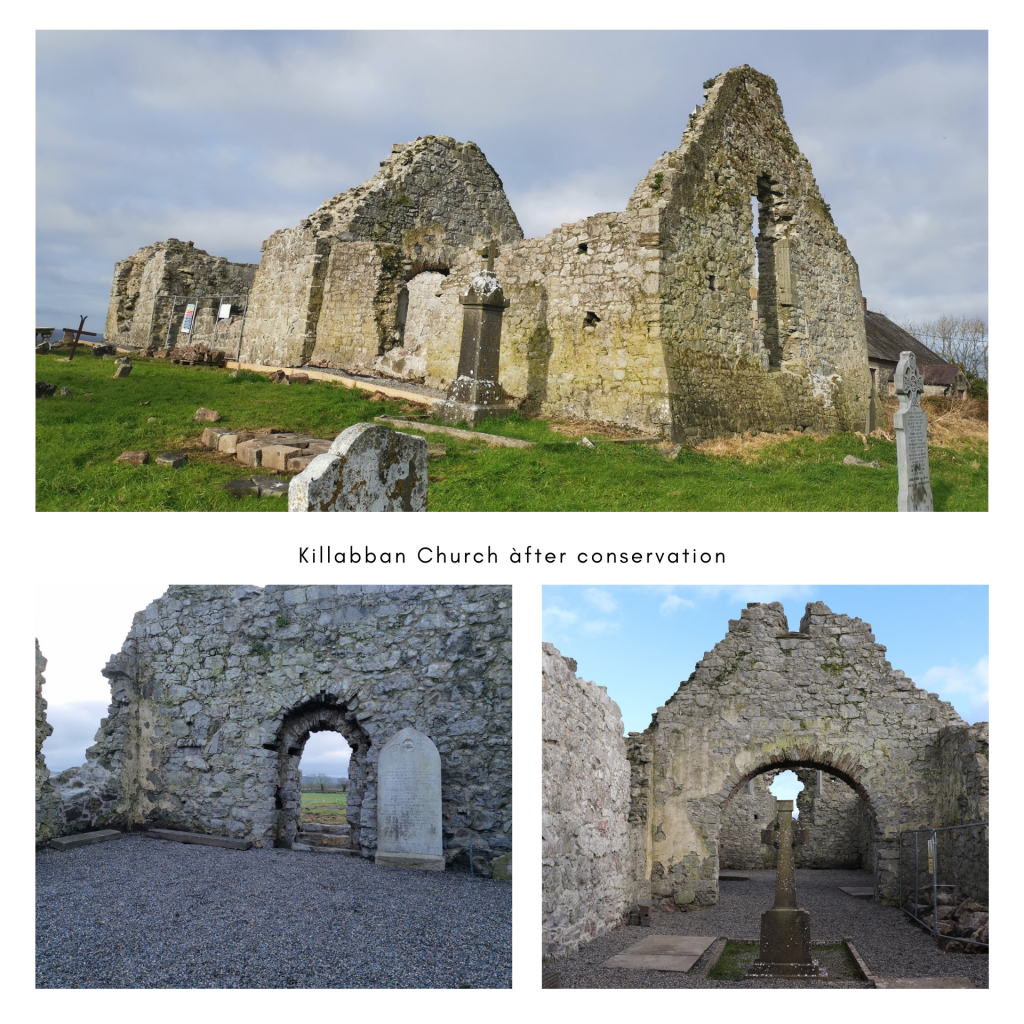 Work is now complete and details are here.

A community-based project to save the medieval Church at Kilmanman near Clonaslee in Laois from collapse, had two successful phases of conservation in 2019 and 2020 with the help of Creative Ireland. Fears for the survival of the medieval church ruins had been raised by members of the local graveyard committee, and help was sought from the Culture Team at Laois County Council.

The conservation project in 2019 and 20202 was supported with funding from the Creative Ireland Laois Programme, and supported by Clonaslee Community Development Association and local residents.

Technical advice was provided by Mountmellick based archaeologist Colm Flynn, and experienced conservation engineer, Aoife Murphy, working for David Kelly Partnership. As the site is so sensitive, permission for the works was sought from the National Monuments Service of the Department of Housing, Local Government and Heritage, and conservation work was carried out by stonemason Jethro Sheen.

A conservation plan for the site was commissioned in 2020 and the site is now part of the Just Transition Funded Conservation and Pollination project – details here. 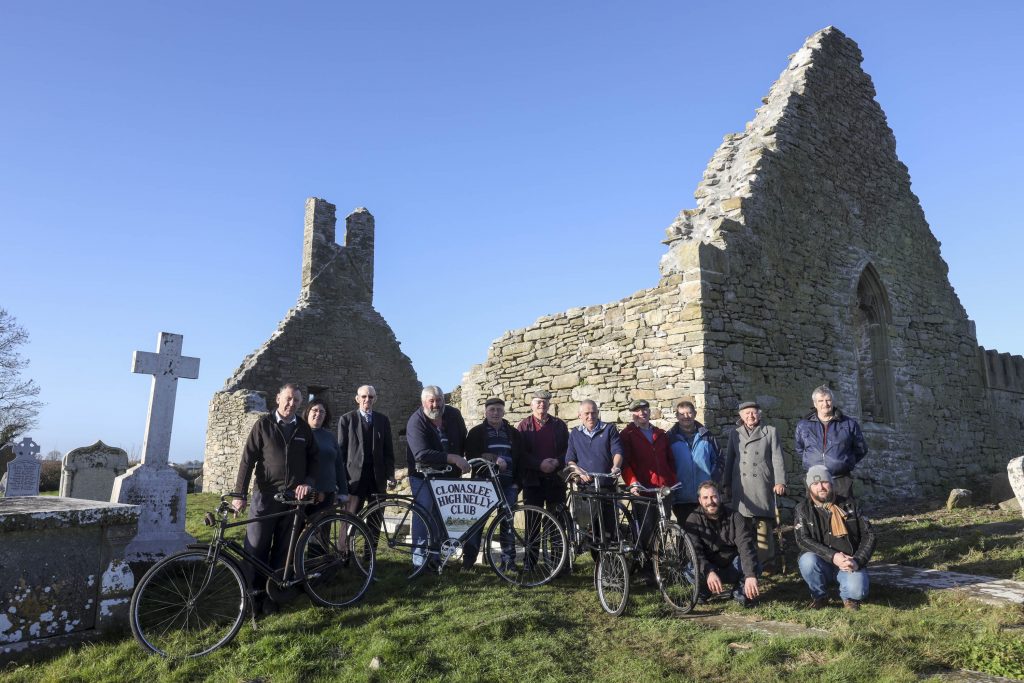 Kilteale Church lies 1 km from the Anglo Norman fortress on the Rock of Dunamase, and may have been the site of the parish church for the settlement around the Rock written about in the 13th and 14th centuries as the “Newtown of Leys” (though historians disagree about the exact site of this town, it may have been at Dunamase or at Lea Castle near Portarlington).

The arch in the East gable had become precarious in 2019 and the local community approached Laois County Council for assistance. Masonry conservation to the arch and walls was carried out by Sheen Stoneworks in 2019,  with funding from the Portarlington-Graiguecullen Municipal District and the assistance of Cllr Tom Mulhall . The archaeologist was Colm Flynn and the engineer was David Kelly Partnership. The stonemason was Jethro Sheen. 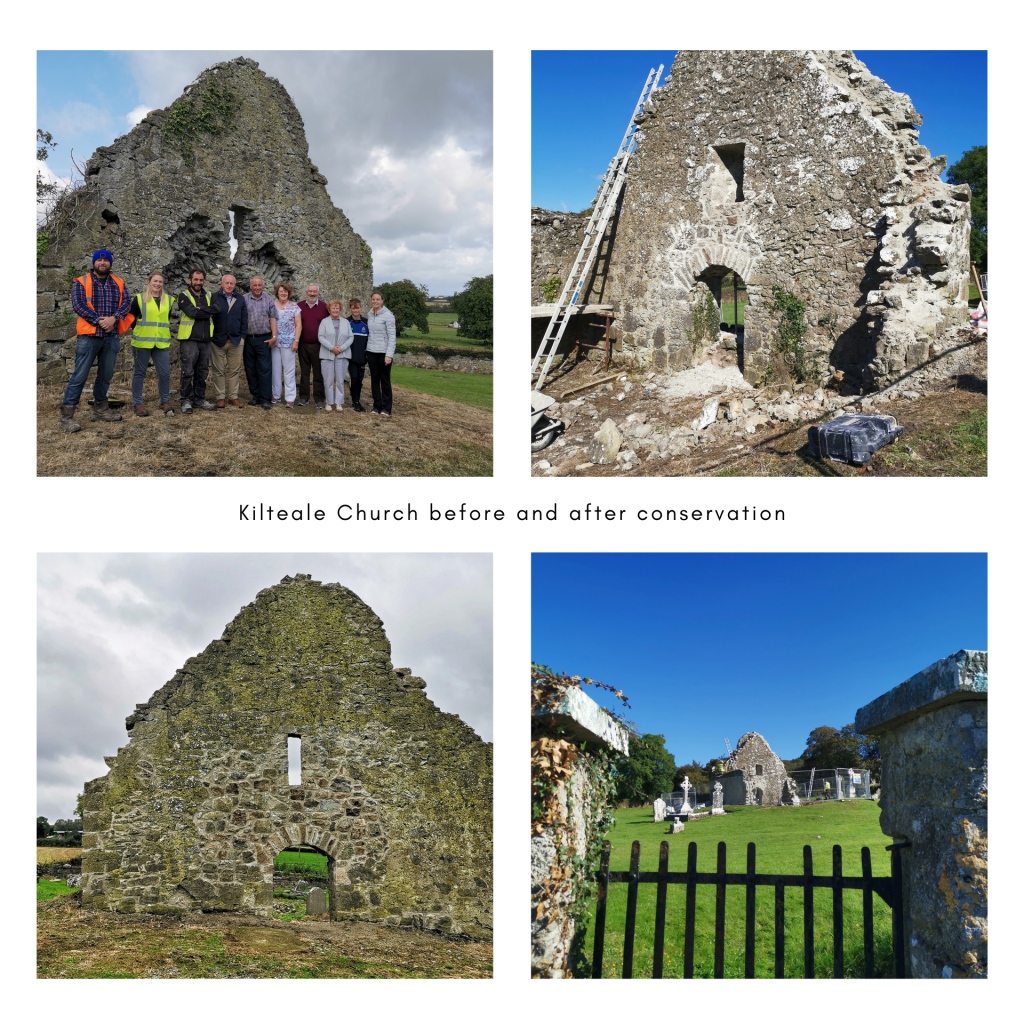 With the assistance of funding from the Community Monuments Fund of the Department of Housing, Local Government and Heritage in 2020, a Conservation Plan for the medieval Church at Dysart Gallen in Spink was completed by Howley Hayes Architects. The site is part of the Just Transition Funded Conservation and Pollination Project – details here. 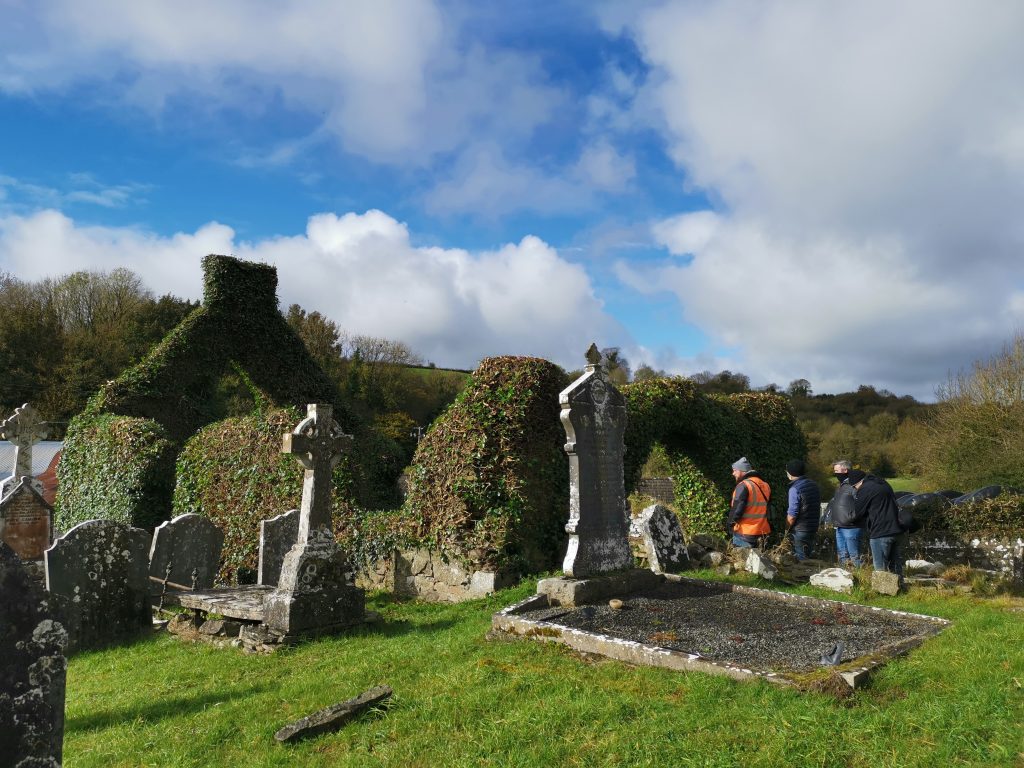 The medieval structures at Timahoe (a former medieval church later used as a tower house, and the iconic 12th century round tower) are looked after by the OPW.  Laois County Council owns the former Church of Ireland church on the site and we have recently  undertaken management of the landscape to improve the setting of the monuments and also to improve the area for pollinators. This work is part of the Timahoe Conservation Plan written by the Community and Margaret Quinlan, and the project archaeologist is Dave Pollock. Work is funded by the Heritage Council. 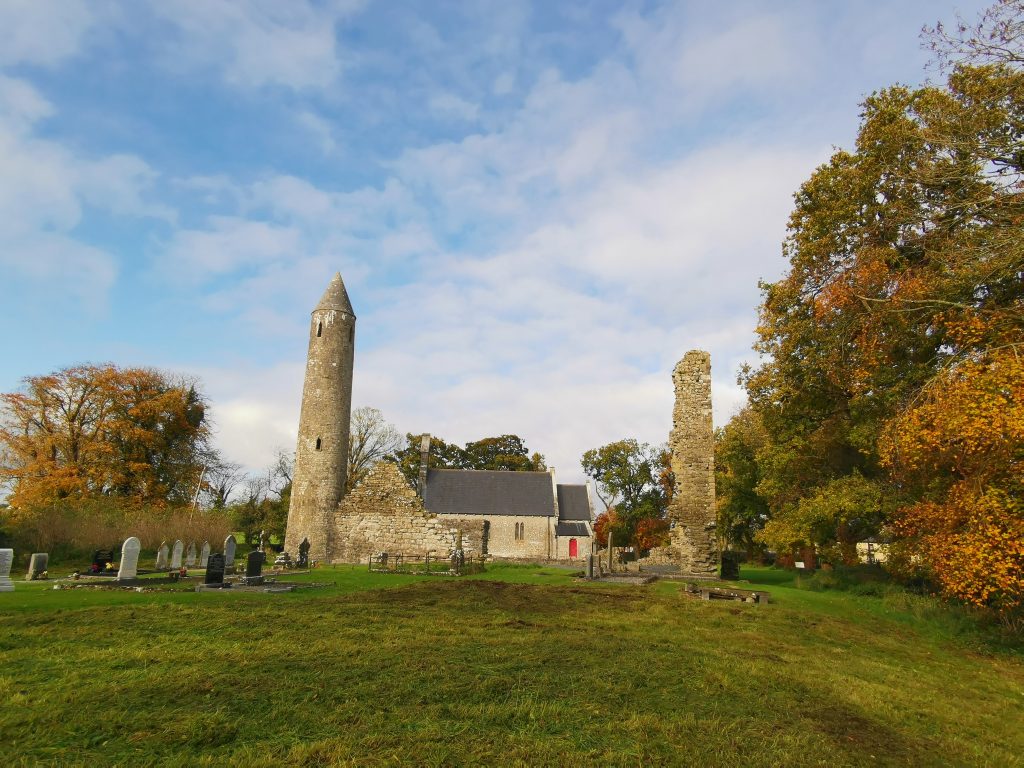