Medieval Churches in Laois and  Offaly

This project supported by the Just Transition Fund will involve conservation action in six medieval churches and graveyards in Laois and Offaly, in collaboration with local communities in each area. Extensive consultation in each county has highlighted these churches as fragile and crucial to the sense of place of the communities around them. The conservation project will have three strands:

One church and graveyard per Municipal District in each county will be conserved, a total of six sites. The project will start with the commissioning of a formal Conservation Plan for each Church and graveyard, and the establishment of linkages with the local community. Conservation of masonry, ecological management and training and engagement with the the community will take place in 2022 and 2023.

A conservation team has been appointed to lead on the development and implementation of the conservation plans in assocation with Laois and Offaly County Councils and in partnership with the community at each site.

The sites chosen for Laois are below (click the name of each site for more information):

Kilmanman Church is 2.5km to the northwest of Clonaslee. The site is dedicated to St Manman, a seventh century religious leader who is reputed to have established two religious centres in Co Laois. The current church at Kilmanman is a later medieval parish church, that was likely constructed sometime in the late fifteenth or early sixteenth century. A possible early Christian site and holy well are nearby. Some conservation work was carried out in Kilmanman in 2019 and 2020 but much remains to be done to the church and its surrounding graveyard.

The ruined church at Dysartgallen was erected as a parish church during the fifteenth century and has long been abandoned, with a significant loss of original masonry to the chancel and the wall heads on the north and south sides of the nave. It stands in a deep river valley close to a small farmstead that remains in occupation, the owner of which has undertaken care of the graveyard over the years. Following trimming (under supervision of the conservation team) in 2020 of a dense covering of mature ivy,  the structure is still clearly at risk, particularly as the ivy growth was standing proud of the masonry acting as a sail that imposed additional wind loading on the structure. Of particular concern are the chancel arch, at the east end of the church and the west-facing gable that includes a tall west window. This is where conservation work will start.

This church and graveyard are on high ground with panoramic views in all directions. The impressive hillfort known as the Dun of Clopook is located to the north east. The present church consists of a nave and chancel constructed with roughly coursed limestone rubble standing in the centre of an irregular-shaped graveyard. This medieval church was dedicated to the Blessed Virgin Mary. The project here will start with a conservation plan, followed by works in 2023. 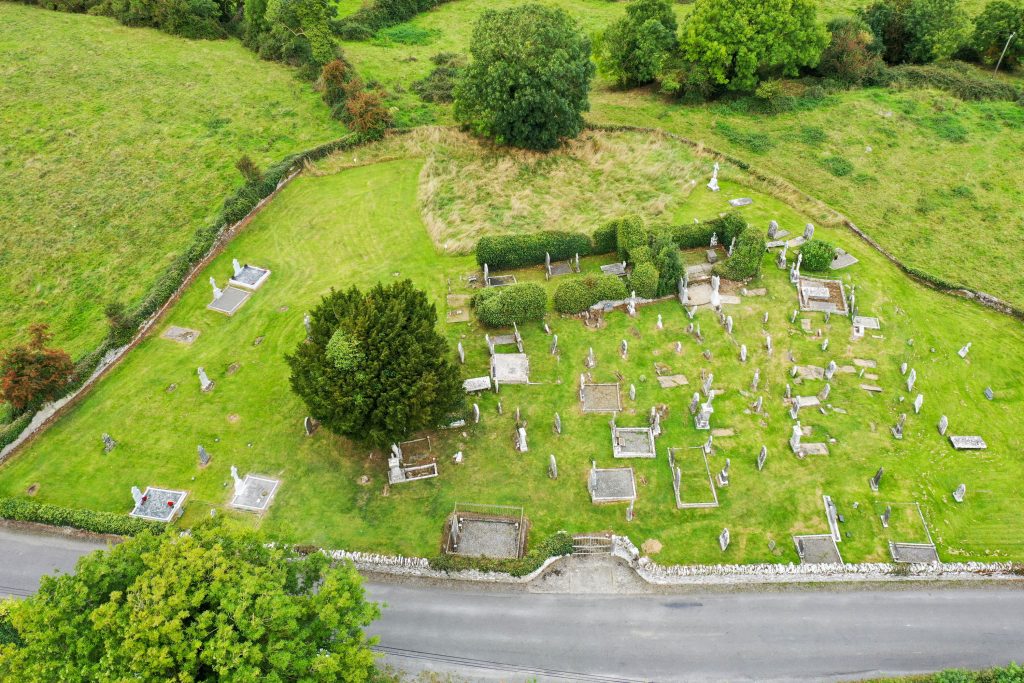 As in Laois, a survey of graveyards in Offaly in 2014 has informed the sites selected for this project. Further information on progress with each site will be available on the website of Offaly Heritage Office.

This closed burial ground with a ruined Medieval church near Clara has a vaulted room located on site. There is a coffin stand incorporated into the southern boundary wall. The centre of the burial ground is raised, this is believed to be the remains of a convent. There are burials throughout the site. This medieval church was highlighted in the Offaly Burial Ground survey as requiring conservation attention.

Large closed burial ground in the parish of Edenderry, with substantial remains of a Medieval church. Celtic cross to United Irishmen Father Kearns and Colonel Perry who were hung in 1798. The church ruins are heavily overgrown with ivy, there are trees growing within the ruins. Parts of the boundary wall are also overgrown.

In the townland of Glebe near Shinrone this roughly circular burial ground is enclosed by wrought iron railings, which is unique in Offaly. There is an iron coffin rest, the only one in the county. Burial ground contains the ruins of a Medieval church, covered with ivy. 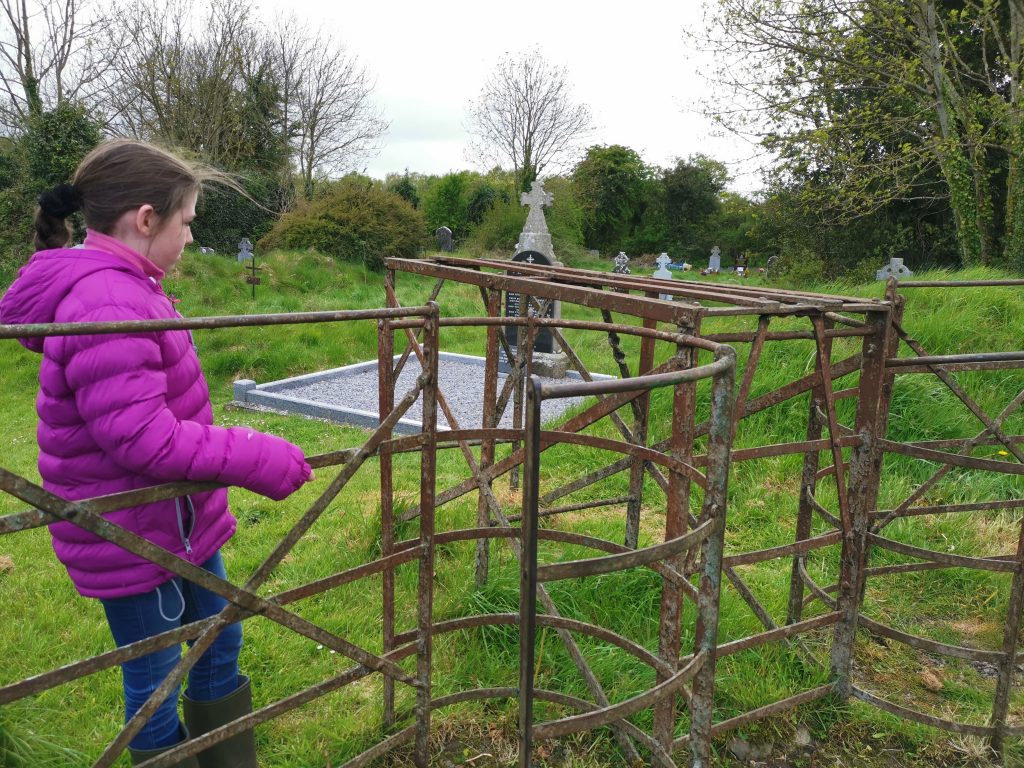 In September 2015, Ireland joined a small number of countries who have developed a strategy to address pollinator decline and protect pollination services. More than 80 governmental and non-governmental organisations have come together to form a shared plan of action, to help pollinators and improve biodiversity across the island.  Implementation of the Plan is coordinated by the National Biodiversity Data Centre and involves everyone from farmers, to councils, schools, gardeners, local communities and businesses doing their bit. Guidelines for management to benefit pollinators by Faith Communities have already been published and guidelines for management of graveyards for pollinators are in preparation. We will work closely with the All Ireland Pollinator Plan team to identify the most appropriate actions to be taken for pollinators at each individual site, starting with ecological survey as part of the formal Conservation Plan, and identification of actions to be taken for pollinators each year of the three year project programme.

Likely suitable actions include recording of pollinators at each site, identification and protection of existing sources of food and shelter for pollinators on each site, agreement of different management regimes for grass on parts of each site eg creation of  short-flowering ‘6-week meadow’ (wildflower lawn), creation of a long-flowering wildflower meadow, cutting of grass later to allow dandelions to bloom in April, protection of hedgerows, creation of nest sites for bees of different types (Bumblebees, mining solitary bees and cavity-nesting solitary bees, elimination or reduction of pesticide use, etc. We hope that our actions will feed into the development of best practice guidelines for management of graveyards for pollinators.

Engagement with local communities at each site will be a key part of this project. The local communities will be fully involved in the process of writing the Conservation Plan and involvement with that process will  build capacity through the process of conservation of the early Christian church at the heart of the community and management of the area around it to benefit biodiversity. Best practice sharing will be achieved through linking communities at each project site together through the course of the project and also linking the community at each site with the wider heritage community in each county through the county Heritage Forum. Communities can play an active role in the enhancement and conservation of the church and graveyard, in line with natural heritage and conservation principles. A series of formal training sessions will be held to upskill local participants in the management of sites to benefit built and natural heritage.

A Just Transition Fund Project supported by the Department of Environment, Climate and Communications