Laois has a long a proud tradition of achievements in aviation, the most well known of which is the achievement of Colonel James Fitzmaurice, a Portlaoise native who was co-pilot on the first plane to cross the Atlantic from East to West, in April 1928.

To celebrate the long tradition of aviation and exploration in Laois, the inaugural Festival of Flight will be held in April 2022. Details here.

Fitz and the Famous Flight

In April 1928, the Junkers aircraft the Bremen took off from Baldonnell Aerodrome in Dublin, and set out to cross the Atlantic from East to West – against prevailing winds – for the first time. On board was Portlaoise native Captain James Fitzmaurice, along with Germans Hermann Kohl and Ehrenfried Günther Freiherr von Hünefeld. When they touched down on Greenly Island, off the coast of Canada, more than 36 hours later, they made history.

The achievement has been celebrated in Laois over the years, and a series of commemorative events were held to mark the 90th anniversary of the flight, in 2018. This included an exhibition by artists Brendon Deacy, a documentary by Louis V Deacy and a joint Irish German commemorative flight and wreath-laying in October 2018. 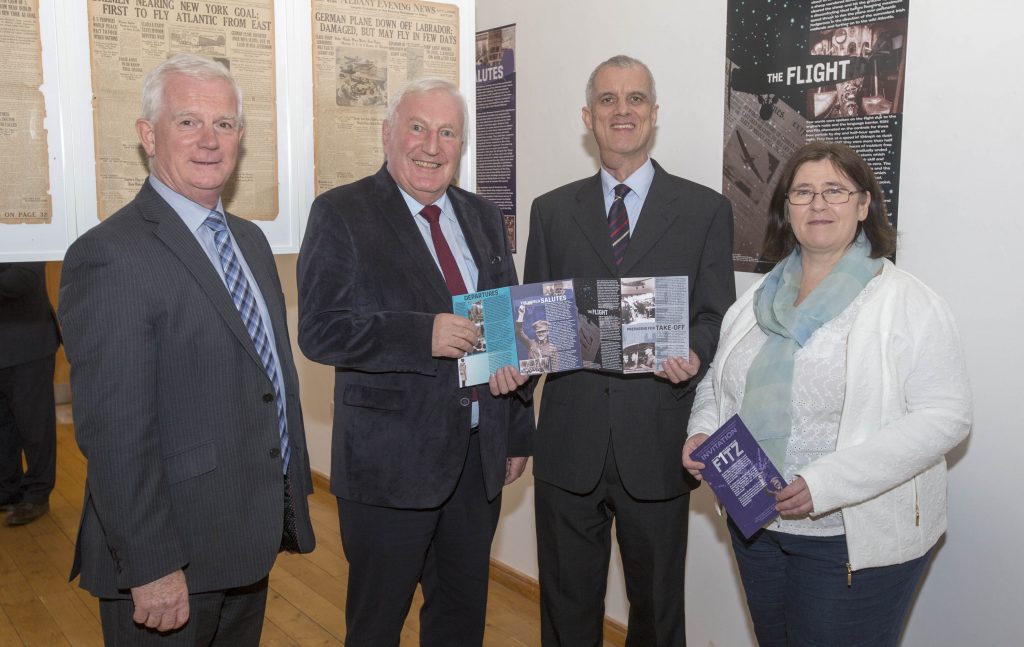 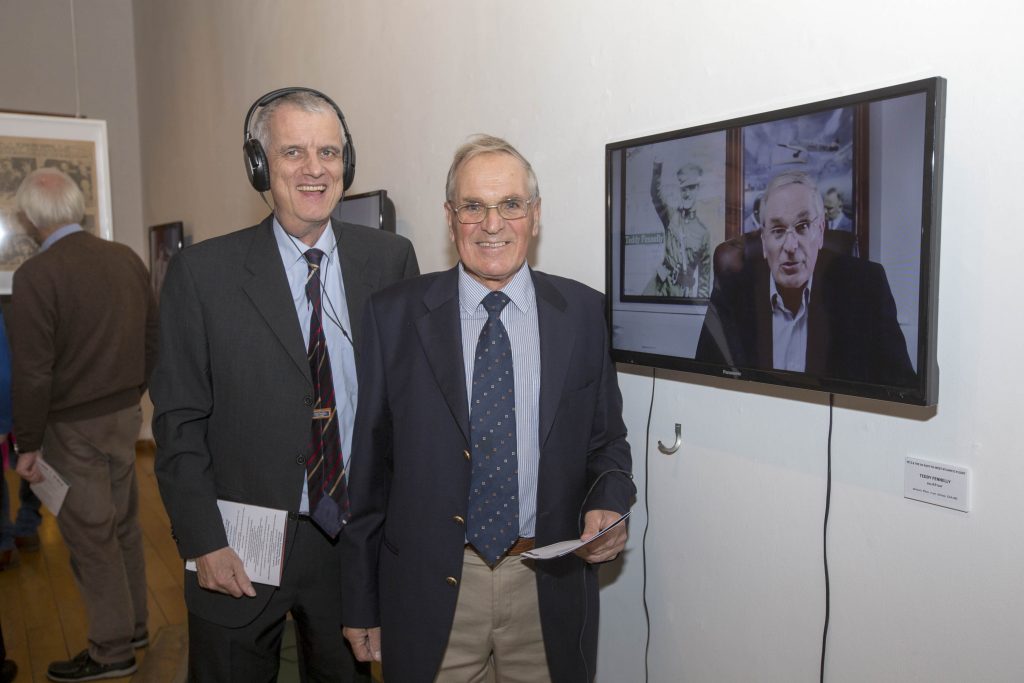 Donal Brennan, Director of Services LCC with Teddy Fennelly, chairman of the Fitzmaurice Commemoration committee at The Dunamaise Arts Centre for the opening of the ‘Fitz & the 1st East-to-West Atlantic Flight’ exhibition.
Picture: Alf Harvey. 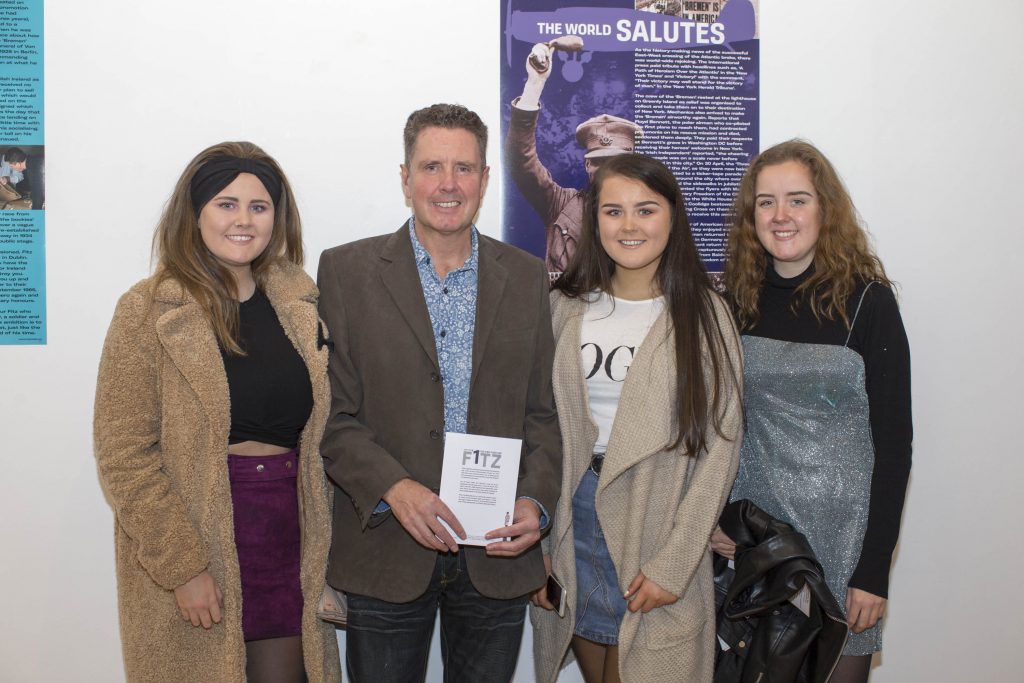 Brendon Deacy, artist and exhibition curator with his daughters Ciana, Kitty and Maggie at The Dunamaise Arts Centre for the opening of the ‘Fitz & the 1st East-to-West Atlantic Flight’ exhibition.
Picture: Alf Harvey. 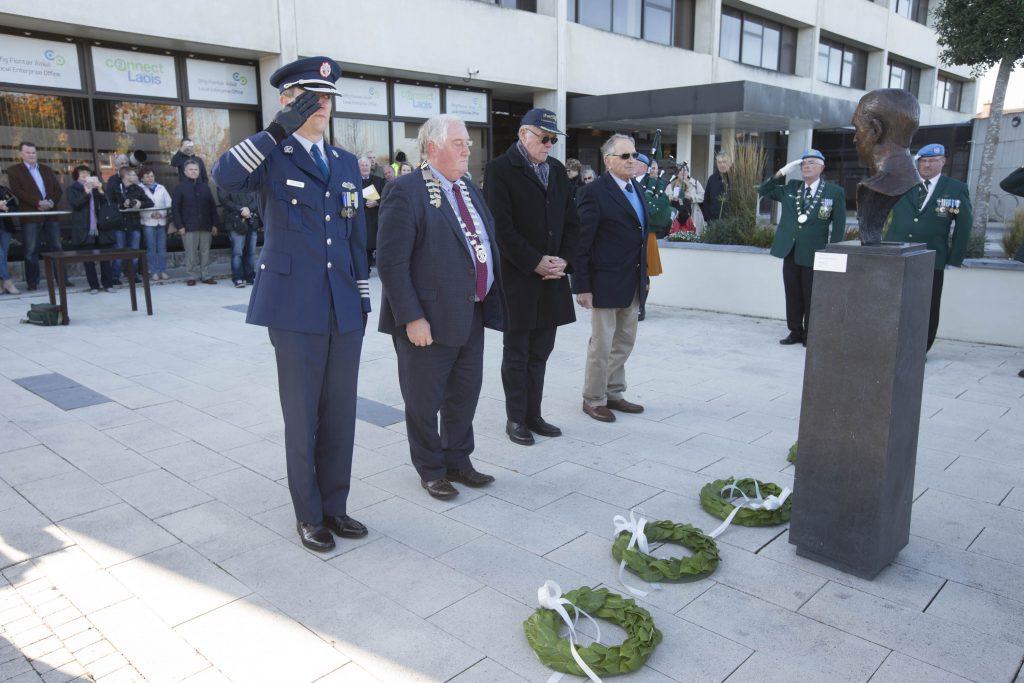 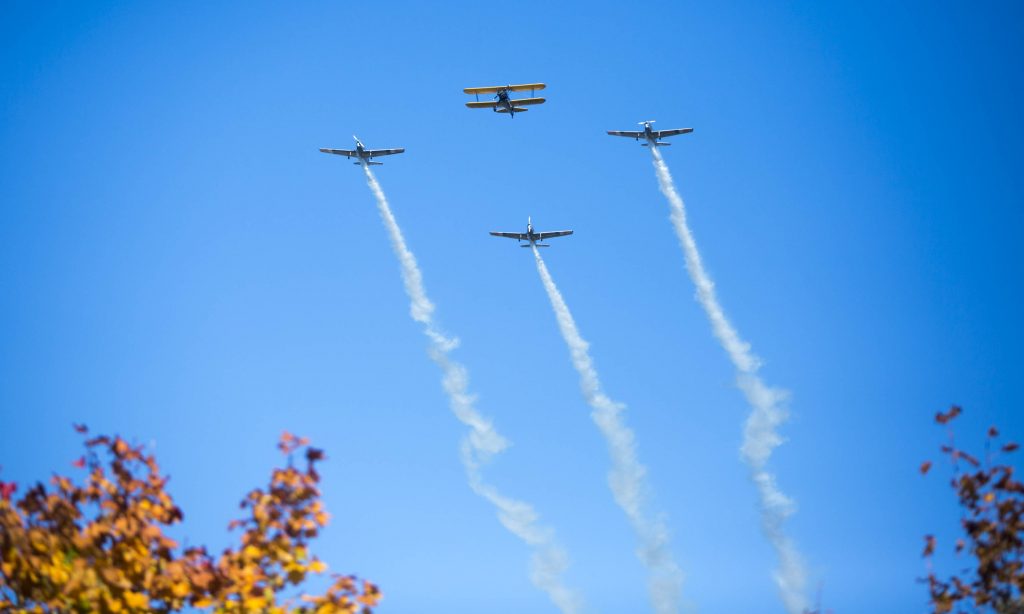 The fly over during the wreath laying at the Fitzmaurice Bust at County Hall, Portlaoise.
Picture: Alf Harvey.

The first aeroplane built and flown in what is now the Republic of Ireland was constructed in Portlaoise (then Maryborough) by a family of renowned motor engineers, the Aldritts, Frank, the father and founder of the business, and his sons, Louis, Frank and Joseph. The Aldritts worked with master carpenter John Conroy and mechanic William Rogers to build their plane, and in 1912 it flew a short distance, witnessed by a number of people .

The Portlaoise Plane is a rare aviation artefact but, better still, it has a close connection with Ireland’s most famous aviation pioneer, Col. James Fitzmaurice, the co-pilot on the Bremen, the first aircraft to fly the Atlantic east to west in 1928. Fitzmaurice grew up in Portlaoise and received all his formal education in the local CBS, next door to Aldritts’ old garage. He later wrote that as a schoolboy he became involved in the plane’s construction, with particular mention of his mentor, Louis Aldritt, and it was from this early experience that he first acquired his interest in aeroplanes.

Following research by Joe Rogers, a descendant of William Rogers, and aviation enthusiasts Teddy Fennelly and Alan Phelan, the plane was discovered, after being housed in a private museum in the south of England and almost forgotten for 40 years. The plane was restored by aircraft engineers Brendan O’Donoghue and Johnny Molloy . The short clip below records the homecoming on the 14th July 2021.

The Portlaoise Plane was welcomed home to Portlaoise at a special event in September 2021, with a performance of “The Impossible Dream” by Martin Tourish and the members of the Music Generation Laois Trad Orchestra. 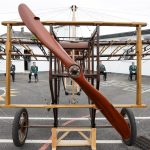 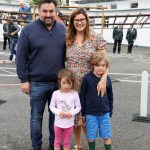 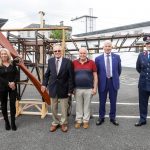 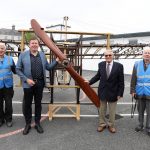 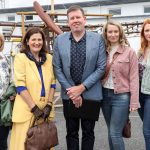 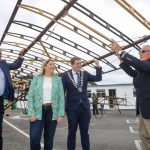 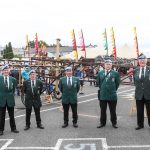 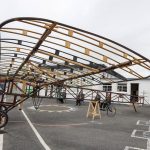 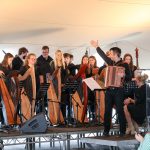 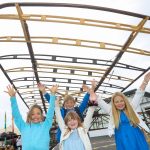 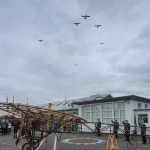 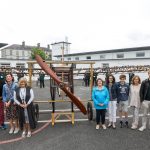 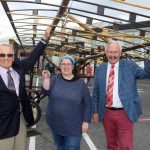 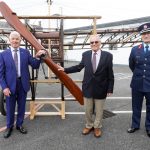 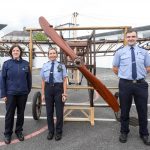 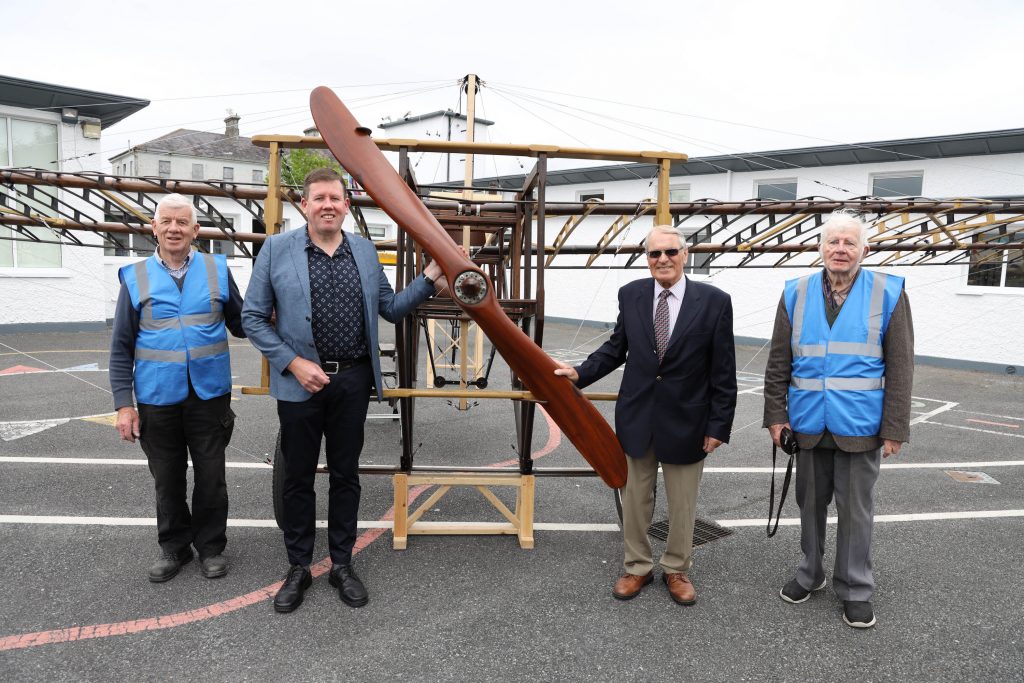 Laois was represented at a major international conference held in Clifden in June 2019 to mark the centenary of the first non-stop transatlantic airplane flight by Alcock and Brown in June 1919. 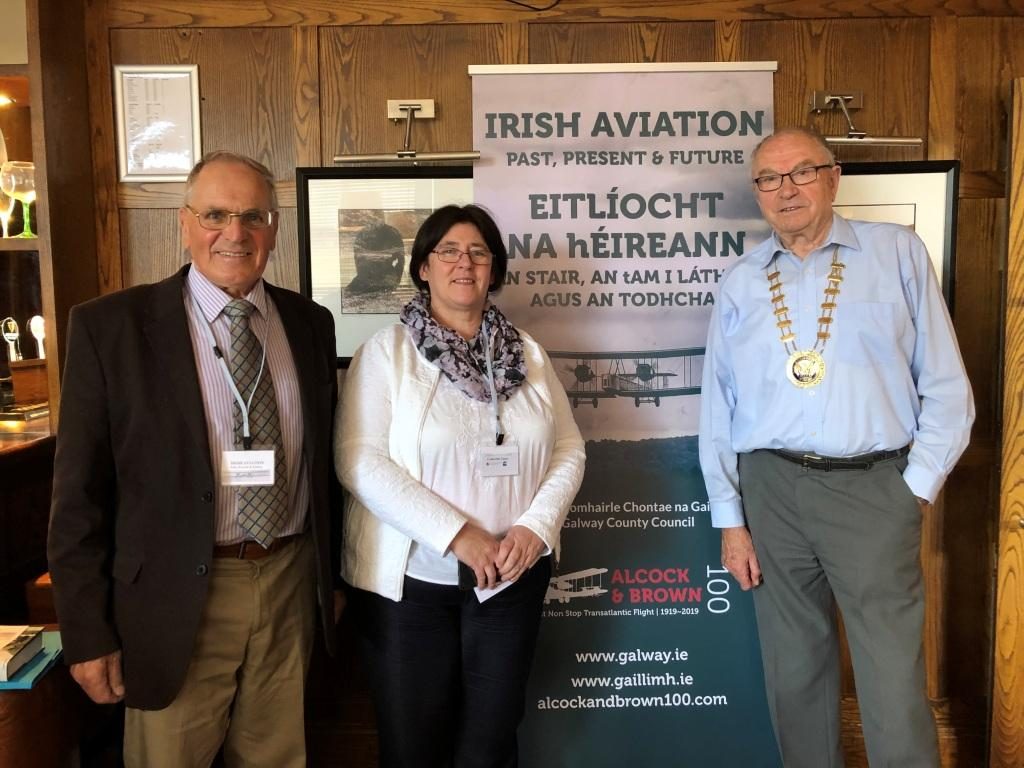 Those present were also fascinated to hear about the “Portlaoise Plane”, built by Louis & Frank Aldritt, Motor Engineers and Johnny Conroy Master Carpenter with the help of mechanic William Rogers – the first plane built and flown in what is now the Republic of Ireland. It is known that Aldritts had a patent to build an airplane as early as 1907. It is also on record that the Portlaoise Plane succeeded in covering a short distance in November, 1909.

Teddy Fennelly said “We know that Colonel James Fitzmaurice helped in its construction as a young boy, and it’s quite likely that this is where the seed was sown for his life-long passion for Aviation. The airplane remained in storage in the original Aldritt motor works at Bank Place, Portlaoise until the late 1970s. It was acquired by a private collector who transported the plane to his premises in the South of England, until we recently brought it home to Ireland. You can follow the story of the Portlaoise Plane at portlaoiseplane.com. 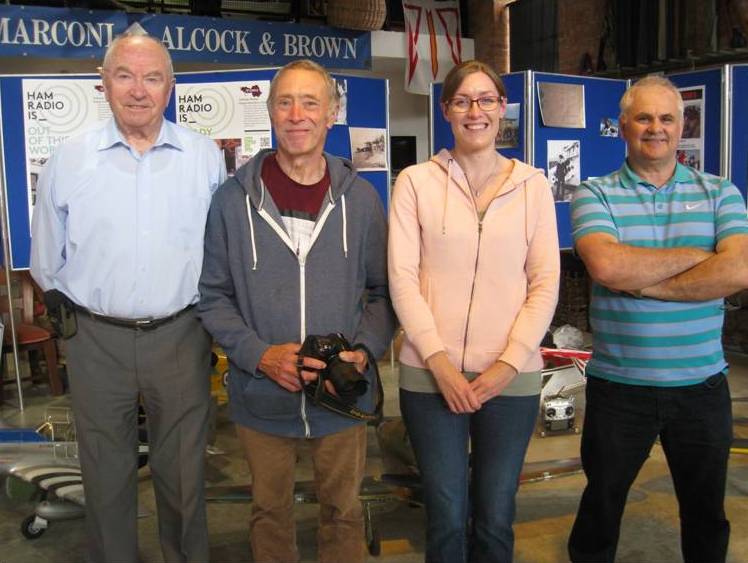