Teddy Fennelly from Portlaoise has been named Ireland’s national Heritage Hero for 2022. Teddy has been an advocate and enthusiast for local history and heritage in Laois for over 50 years. He has been honoured with the 2022 Heritage Hero award for his outstanding contribution to the protection and promotion of heritage over more than 50 years.

The awards recognise the enormous contribution of individuals and community groups across Ireland in ensuring the preservation, protection, and promotion of Ireland’s built, natural and cultural heritage. The annual event, which is organised by the Heritage Council, was held at the Royal College of Physicians Ireland and was hosted by RTÉ broadcaster Anne Cassin. 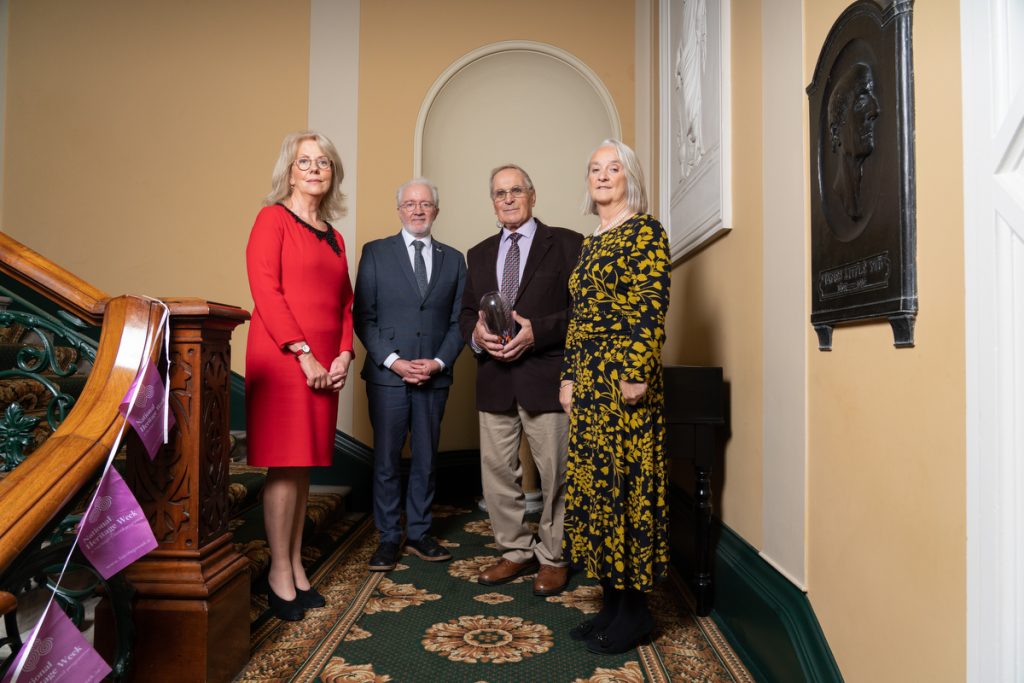 This year National Heritage Week celebrated the return of in-person events, while continuing to showcase digital projects, which proved popular over the last two years. More than 1,800 events and projects took place around the country in August during National Heritage Week, as communities and individuals answered the Heritage Council’s invitation to explore this year’s themes of sustainable heritage and biodiversity.

Teddy Fennelly was nominated for the award by Laois County Council.

Welcoming the announcement, Cllr Thomasina Connell, Cathaoirleach of Laois County Council said “Teddy has dedicated his life to the heritage of County Laois and this award acknowledges his immense contribution. We in Laois County Council are acutely aware of the immense value that people like Teddy bring to heritage and community life in the county and throughout the country.  Teddy is a very deserving winner of the award and I’m delighted to congratulate Teddy, his family and his many friends and colleagues on this great achievement”. 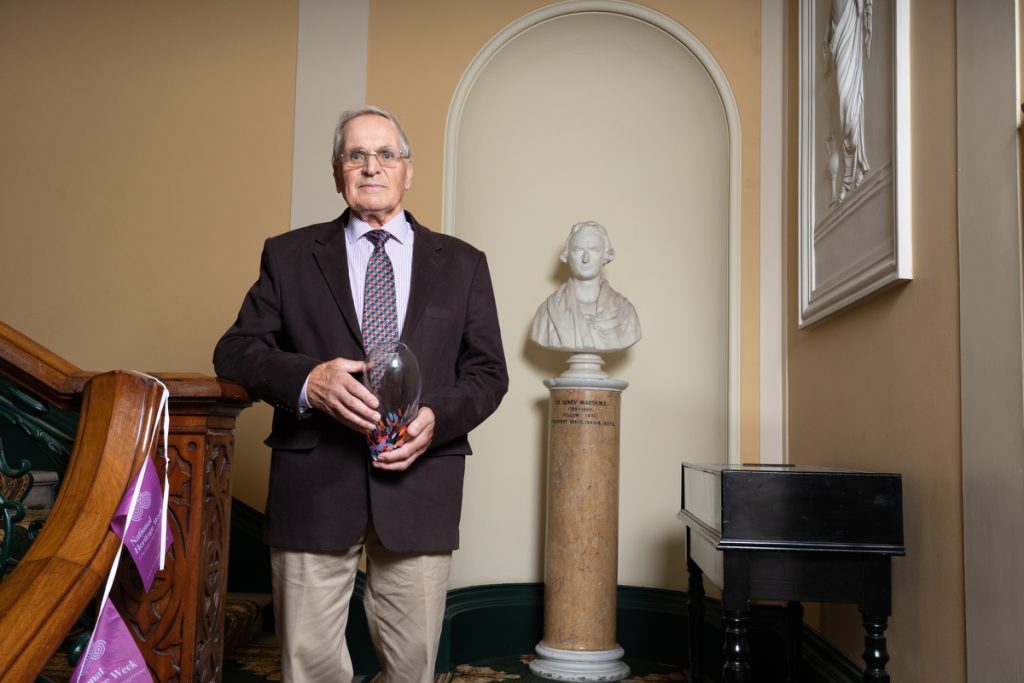 Teddy Fennelly has been pivotal in ensuring that the story of Colonel James Fitzmaurice and first East-West Transatlantic flight in April 1928 is remembered and his book “Fitz and the Famous Flight” is the definitive work on the subject. As Chair of the Col Fitzmaurice Commemoration Committee, Teddy commissioned ”The Impossible Dream”, a piece of music by Martin Tourish and the Music Generation Laois Trad Orchestra commemorating Fitzmaurice and the Flight. He was also instrumental in overseeing the naming of Fitzmaurice Place in Portlaoise, the regeneration of the area and the installation of a sculpture commemorating the flight.

He had a pivotal role in the purchasing, repatriation and restoration of the Portlaoise Plane and organised for a US flag received by Fitz on his triumphant tour of America to be donated to Laois County Council. Earlier this year he instigated the Laois Festival of Flight. 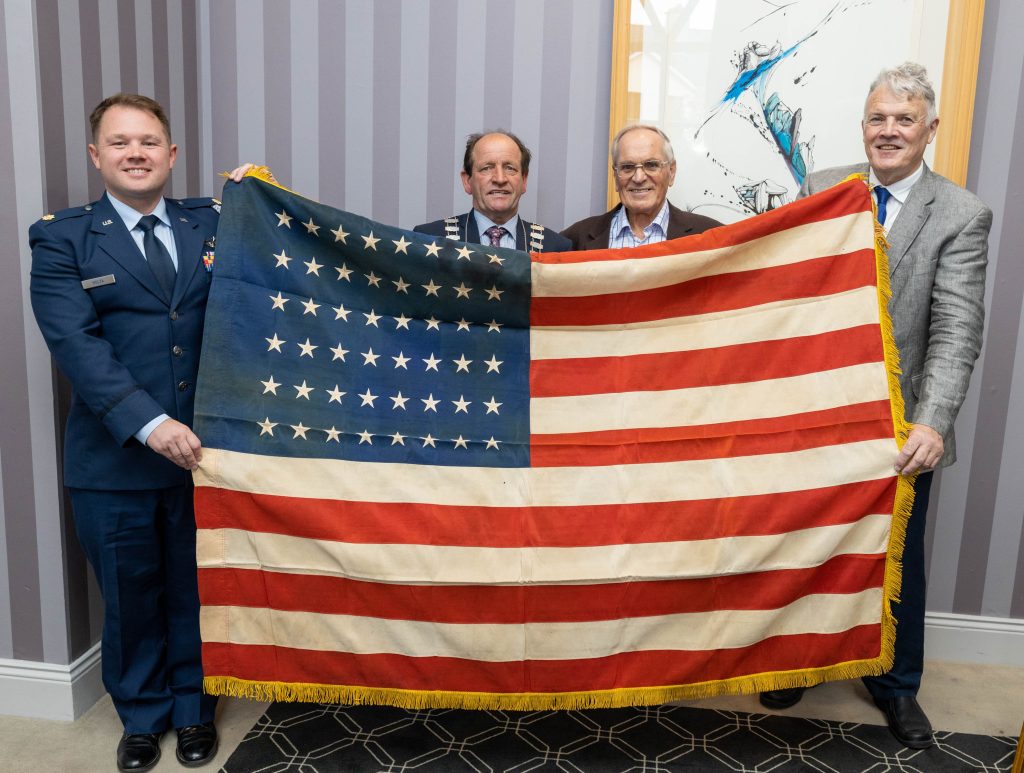 Teddy has played a key role in the heritage led regeneration of the 16th century plantation fort, Fort Protector at the centre of the town, driving the conservation plan for the Fort. An area that was neglected now has a regenerated public square, the fort walls are conserved, a 16th century church and graveyard have been conserved and reopened, and the Old Fort Festival is bringing economic development into the town.

He has written books on everything from the cooperative movement and Donaghmore Workhouse to the history of Laois GAA. As Chair and President of Laois Heritage Society he has been responsible for publishing journals, promoting research and carrying out practical conservation projects.

Speaking at the event, Minister Malcolm Noonan TD, said: “I am delighted to be able to attend the annual National Heritage Awards and acknowledge the fantastic work of so many heritage enthusiasts around Ireland. National Heritage Week demonstrates that there are a great many people who really do appreciate our precious heritage – be it built, natural or cultural – and are willing to work together to protect and conserve it. I share that commitment and welcome the fact that my Government colleagues and I have been in a position to double funding for natural, built and archaeological heritage since I took office in July 2020.”

Chair of the Heritage Council, Dr Martina Moloney praised the enthusiasm and passion of the event and project organisers. She said: “National Heritage Week is not only a celebration of heritage but also a celebration of people and particularly those whose work in heritage, very often as volunteers, has made such a difference to their communities. The Awards are our chance to say thank you for the outstanding work and collective effort of all participants.”

Chief Executive of the Heritage Council, Virginia Teehan added: “National Heritage Week aims to build awareness and education about our heritage. This year it looked to the past to create a better future and chose themes that have particular resonance for us all as we grapple with climate change and the impact we have on the world around us. We chose the themes of sustainability and biodiversity and encouraged organisers to examine the intersection of the environment with preserving our tangible, intangible and natural heritage to create a more resilient world. The Awards are a recognition of every organiser, and of every event and project that took place. Today’s recipients are representative of the tremendous work of all organisers across the country, work that supports and encourages heritage protection.” 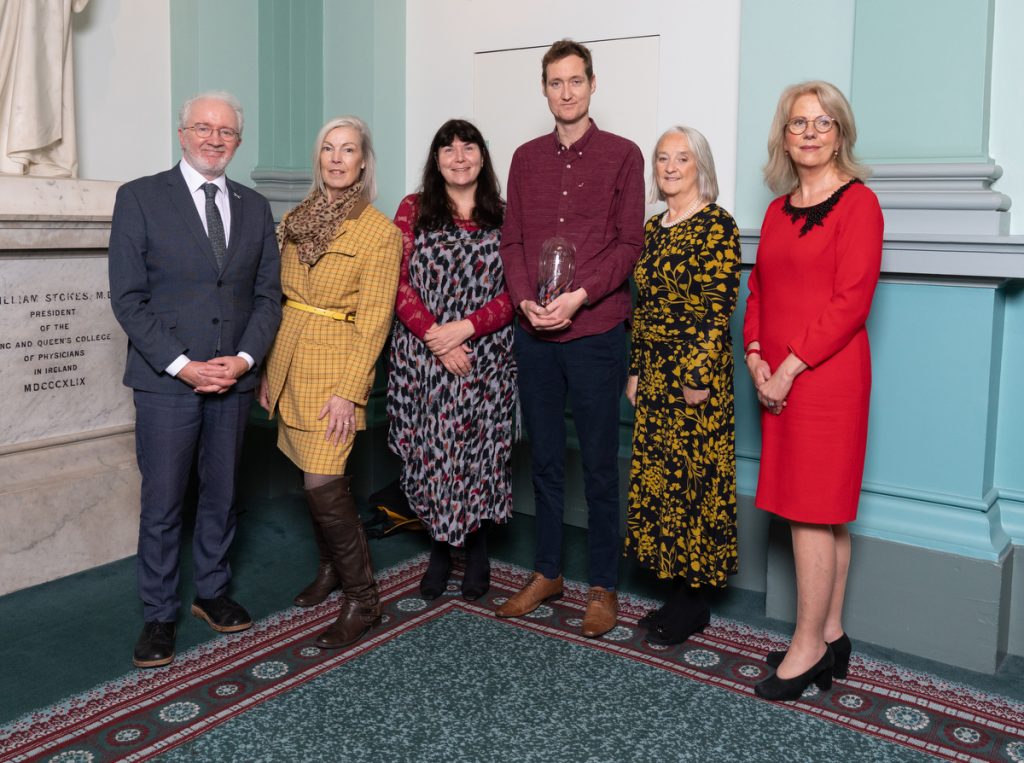 This award is presented to the event that successfully encouraged a greater appreciation of our natural world or a consideration of the variety of plant and animal life in the area, and/or conservation of native species and natural landscapes, and/or that considers a resilient and sustainable future for the environment.

Ricky Whelan of BirdWatch Ireland started the event at the rookery at the Downs beside the Park, one of the largest in Laois, and brought to life the antics of the Rooks and Jackdaws that call Portlaoise their home.

Ricky Whelan said “We are blessed to have such natural spectacles on our doorsteps and at the centre of our county town. To be able to see upwards of 4000 Rooks come to roost each winter evening is truly wonderful, it’s a privilege to observe their behaviours, politics and social structures right on our doorsteps. Add the wonder of echolocating and foraging bats to the equation and you have a truly special event”. 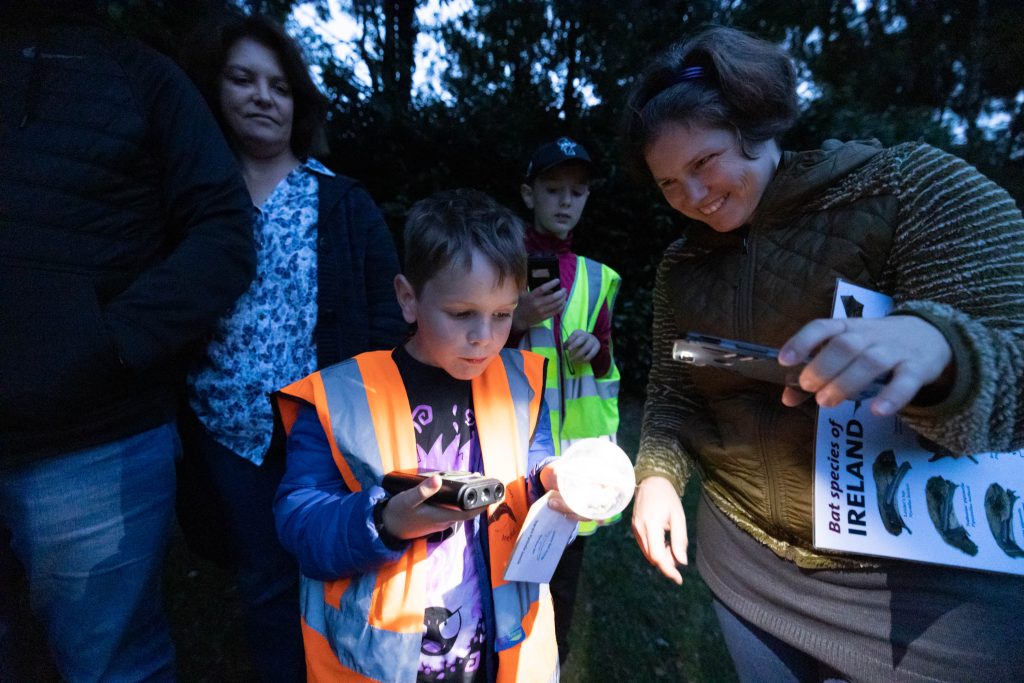 Studying the different bats at the Bats and Rooks Walk in Portlaoise Town Park for Heritage Week.
Picture: Alf Harvey.

Anna Collins of Kildare Bat Group explained the bat life of the Park, showing adults and children alike how to use bat detectors to make the echolocation calls of the bats audible to human ears, and helping everyone to adjust the frequency on the detectors to actually identify the different bat species flying above the group, purely by the frequency of their calls.

One of the highlights of the event was when the group was treated to the sight of two Daubenton’s bats, possibly a mother and young, flying together low over the park’s lake, feeding on the insect life of the lake.

Páirc an Phobail in Portlaoise, managed by Laois County Council, is an oasis for wildlife in the town, having recently been awarded the Green Flag for Parks. The original vision for Páirc an Phobail has evolved over the last 16 years with many new additions, designed to attract people of all ages back to using the Park to its full potential. Some of the facilities in the Park are a natural play area, a woodland walk containing a bilingual Tree Trail, grassy areas managed for pollinators and a small man -made lake which is also managed for wildlife. The Park provides an excellent location for nature trails and also gives schools and families the opportunity to observe local wildlife in a beautiful setting. The Park has successfully achieved a Green Flag Award each year since it first entered the scheme in 2016. 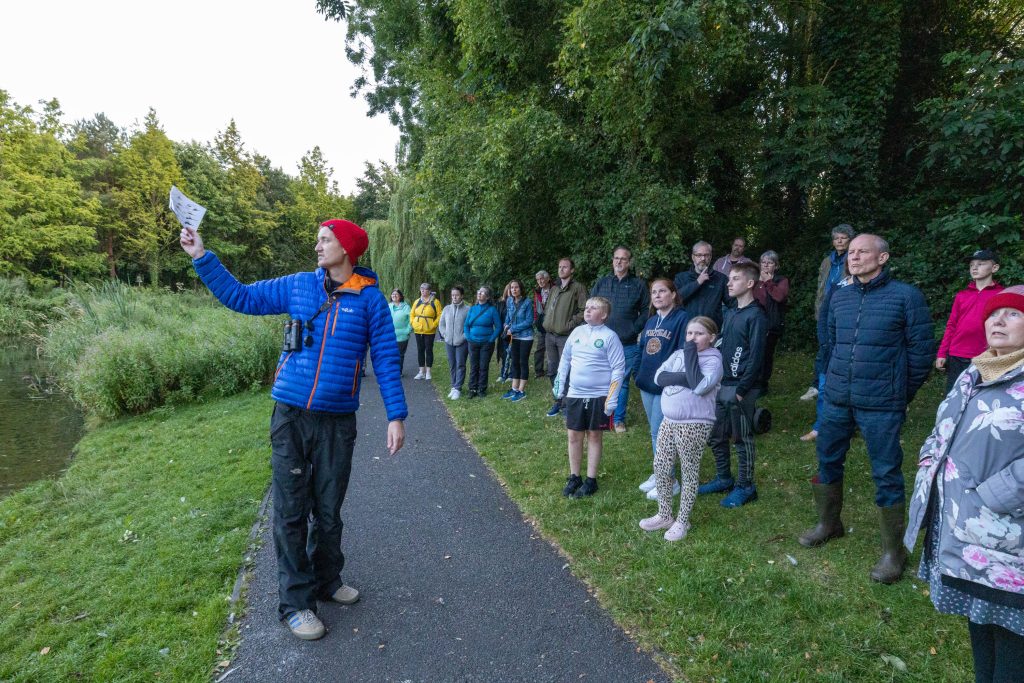 Errill Tidy Towns won the Laois County Heritage Week Award for their project to mark the 175th anniversary of the great famine in Errill, by erecting a commemorative plaque and limestone seat, near the site of what was once a soup kitchen, to feed desperate people of the town during the famine. This is phase one of the group’s famine pot project. Phase two will be the installation on site of the actual famine pot that was used in the soup kitchen. The pot was kindly donated by a local family and was on view on the evening.

A research project on the history and impact of the famine on the Errill area was undertaken by Aisling O’Dea, Fiona O’Dea, Michelle Bourke, Jenny Galbraith and Cathy Galbraith as part of the Laois Volunteering Scheme – Local History Research Project 2020, under the guidance of Peadar Cleary of Errill Tidy Towns. 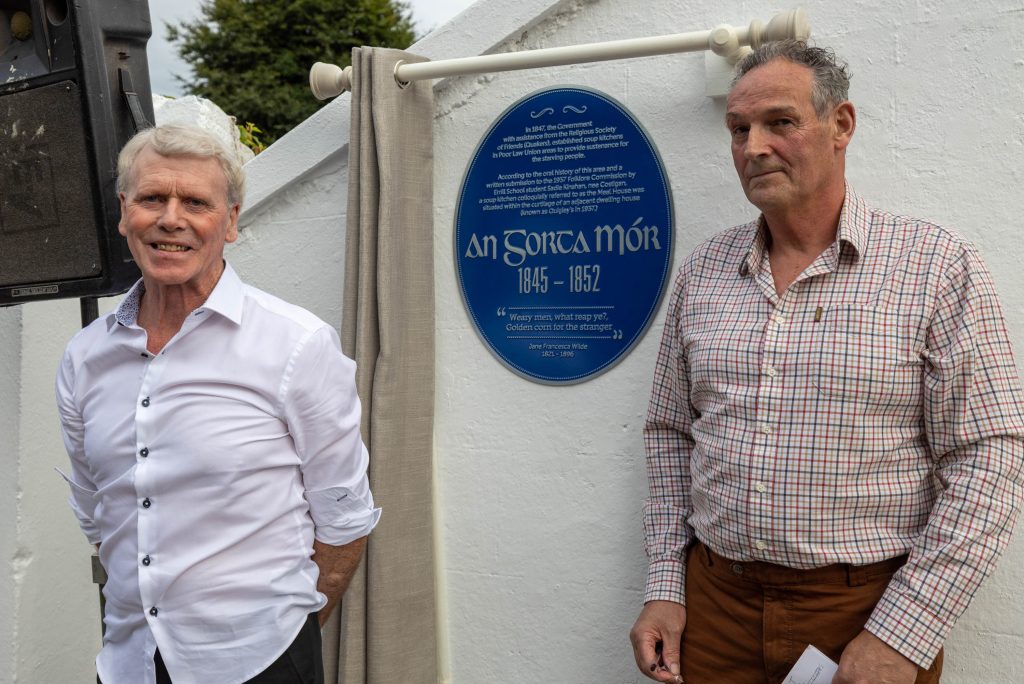 Famine Commemoration with the unveiling of a memorial seat and plaque in Errill during Heritage Week.
Picture: Alf Harvey.

A commemorative plaque was unveiled as part of the Laois Heritage Week event.  John Kinahan, descendent of Sadie Kinahan who had written about the Soup Kitchen in Errill during the 1930 Schools Folklore Project, unveiled the An Gorta Mór plaque.

Professor Emeritus William J. Smyth, who unveiled the commemorative limestone seat, noted that one third of the local population had disappeared during the famine through death or emigration. Half of the local children disappeared. Most of them had nobody and were forgotten. One of the missions of famine commemoration is to give memory back, he said.

He stressed that it was not a famine in the sense that there was food, but instead was an Gorta mor. “The potato blight was an ecological disaster. What happened was a political disaster – a failure to act. It was always too little and too late.” 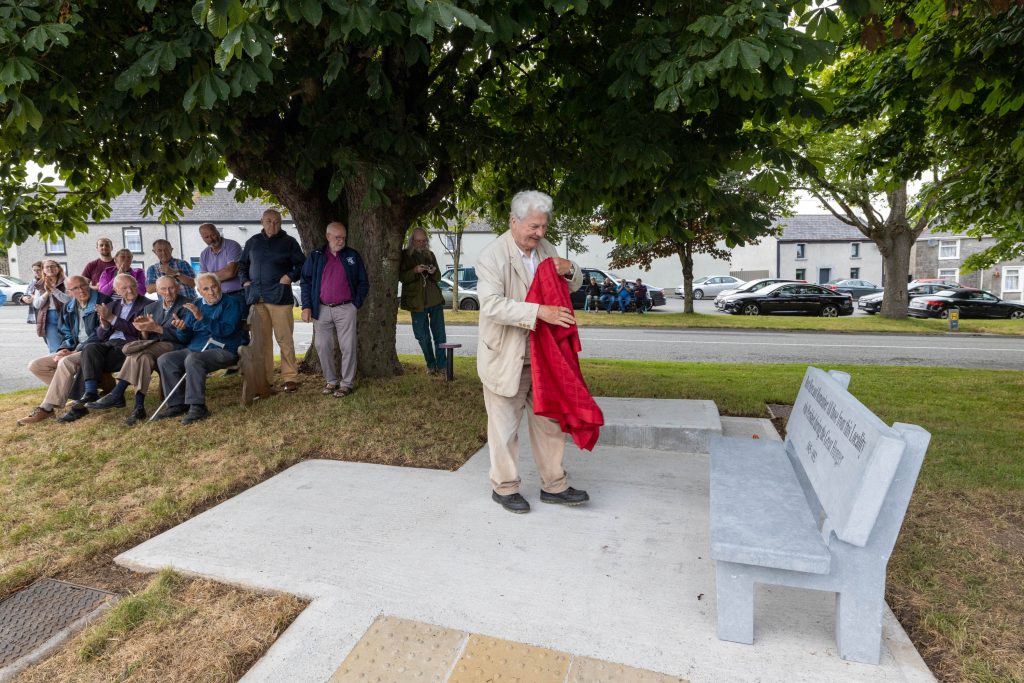 Professor William Smith unveils the memorial seat at the Famine Commemoration with the unveiling of a memorial seat and plaque in Errill during Heritage Week.
Picture: Alf Harvey.

Retired detective Eamon Cleary was instrumental in unearthing much of the history of the local area during the period. He recalled that the famine was not spoken of during the 50s and 60s and very little was handed down verbally on it.

It was only when he undertook some research himself in UCD that he discovered the submission of Sadie Kinahan (Costigan) for the Folklore Commission in 1937. She pinpointed where the soup kitchens were locally and outlined the situation.

The CEO of Laois County Council John Mulholland complimented the committee on their work. Cllr John King also paid tribute to their work and said that the seat was “a headstone of history.”

Speaking on behalf of the Kinahan family, John Kinahan thanked the committee and said the family were delighted with the part his mother played.

He thanked Eamon Cleary for his excellent work, noting that his mother had never spoken about it outside of her submission to the Folklore Commission. The evening rounded off with three recitations by local poet Michael Creagh. 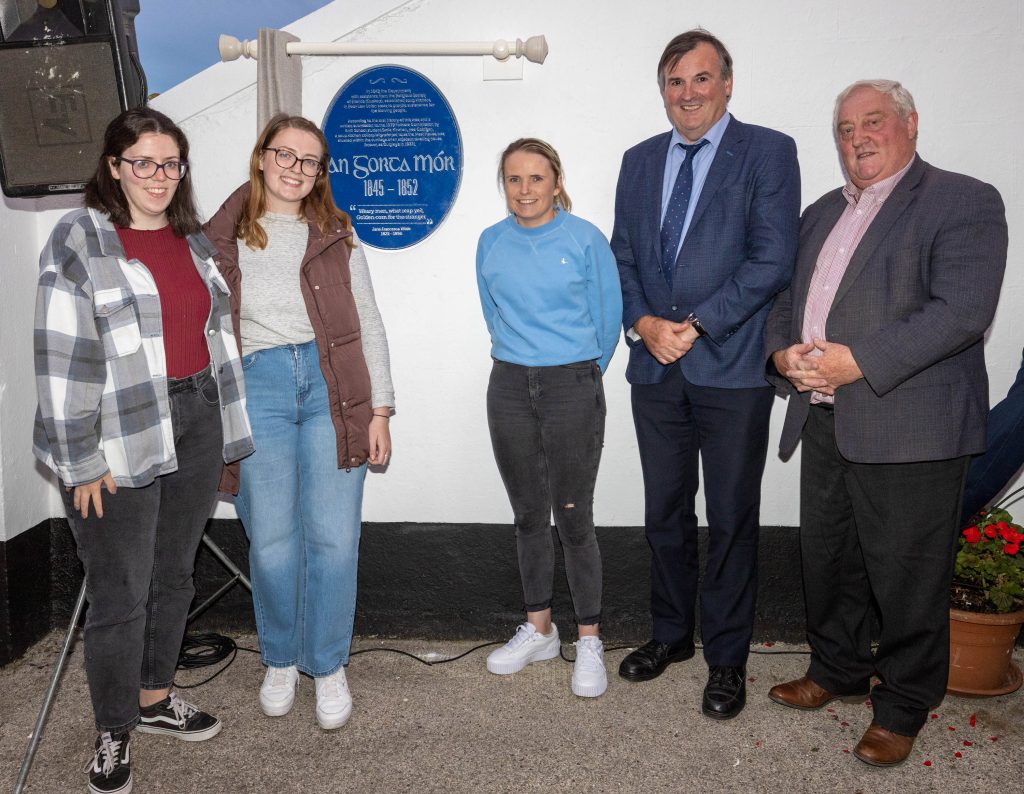 Aisling and Fiona O’Dea and Michelle Bourke (not pictured are Cathy and Jenny Galbraith) who researched the project on the history and impact of the Famine on the Errill area; John Mulholland, Chief Executive Laois County Council and Cllr John King at the Famine Commemoration with the unveiling of a memorial seat and plaque in Errill during Heritage Week.
Picture: Alf Harvey.