The Swift is a small migratory bird which arrives in Ireland to breed from Africa in May and departs by August each year. Although similar in appearance to Swallows and Martins, the Swift’s nearest relatives are thought to be the Hummingbirds, native to North and South America.

“We are delighted to be launching this wonderful mural as part of Culture Night as it represents the coming together of the biodiversity of Laois through the Swift and the creative artistic side of the county through the medium of street art. As Swifts are such an urban bird, living in our towns and villages, I can’t think of a better subject for a large scale street mural. This project will rise awareness of the importance of Mountmellick for swifts and also the other work being done to survey and conserve swifts across Laois, with the support of the Heritage Council and the Local Biodiversity Action Fund.”The Swift’s scientific name Apus apus means ‘without feet’ which refers to the Swift’s short legs rather than to any lack of feet. Swift’s legs and feet are adapted to cling to vertical surfaces rather than perching on wires and walking on the ground. If they find themselves on the ground, it can be difficult for them to take off again. 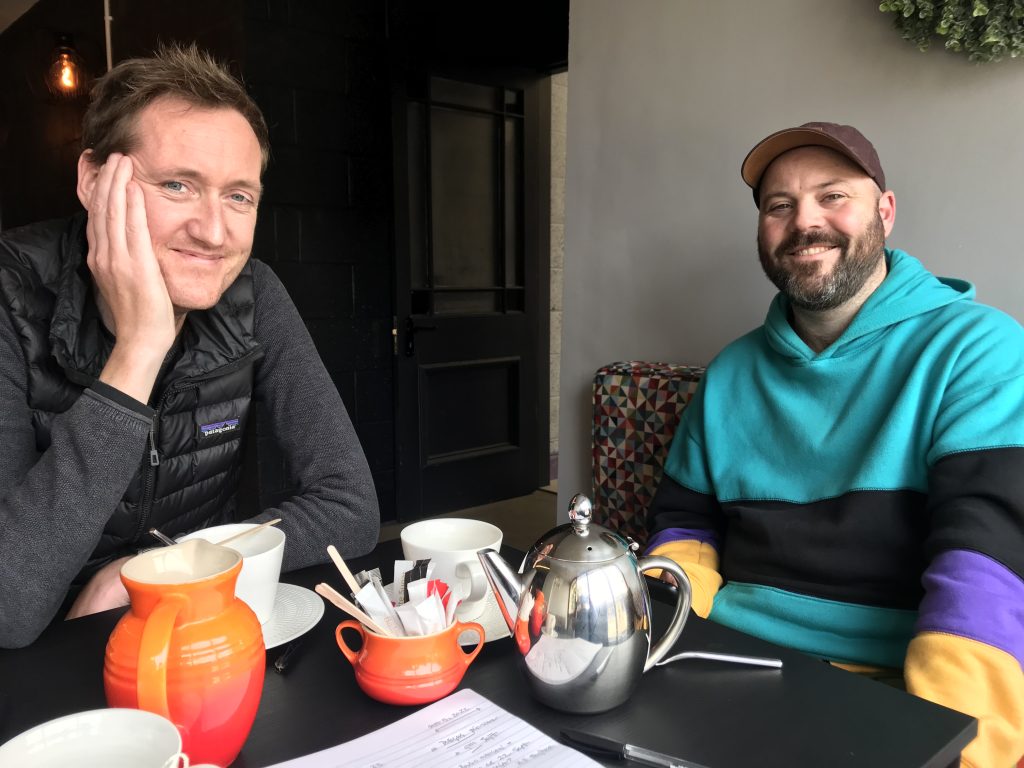 Swifts are more common in urban areas, building small, cupped nests in small crevices in buildings, as well as in the eaves of houses. Swifts pair for life and return to the same nest site for many years. They spend most of their life in flight, drinking, feeding, mating and evening sleeping in the air.

“Mountmellick has a wonderful cultural heritage and I am so proud to see its rich natural heritage enshrined by the Swift mural. Mountmellick is a stronghold within county Laois for these charismatic and threatened birds which is something we should all celebrate and be vigilant to protect into the future.”

Swifts are among the fastest of birds with Ireland’s Swift able to reach speeds of over 110km per hour. The average Swift weights about 40 grams – the same weight as a Cadbury’s Crème Egg! They feed on airborne invertebrates (spiders, flies and small insects) captured in flights. The Swift’s call is a loud, piercing scream and Swifts will often form ‘screaming parties’ on summer evenings, when ten to twenty Swifts will gather in a group flight above their nesting area, calling out to each other excitedly.

“From the moment Creative Ireland Laois reached out to me about this mural project, I was very interested and excited, especially because I am a huge fan of Swifts. I had also recently listened to Ricky Whelan’s and Niall Hatch’s ‘In Your Nature’ podcast on Swifts, so it is an added bonus to work closely with Ricky and learn even more about these fascinating birds. To be an artist who gets to paint a mural about the conservation of swifts is an honour and it goes without saying that I am wholeheartedly looking forward to being in Mountmellick and creating this mural that highlights the uniqueness of this bird”.

Wexford-born James Kirwan is an experienced artist based in Dublin. His work has been showcased in solo and group exhibitions, and his mural work has been seen as far away as Canada. James has worked extensively in Ireland too, with recent work appearing in Gorey, Waterford, Thurles and Dublin. James’ work is often made with bold colours, with a mix of playful abstract forms and references to the natural world and landscapes.

James has a keen interest in the importance of the protection of birds and their habitats in Ireland. He brings this, in his distinctive style, in the stunning piece for Mountmellick’s Swift mural. In October, James is scheduled to return to Mountmellick to facilitate a creative workshop with art students in Mountmellick Community College which will explore his street artworks and techniques, and reflect his interest in nature, and his use of abstract shapes. 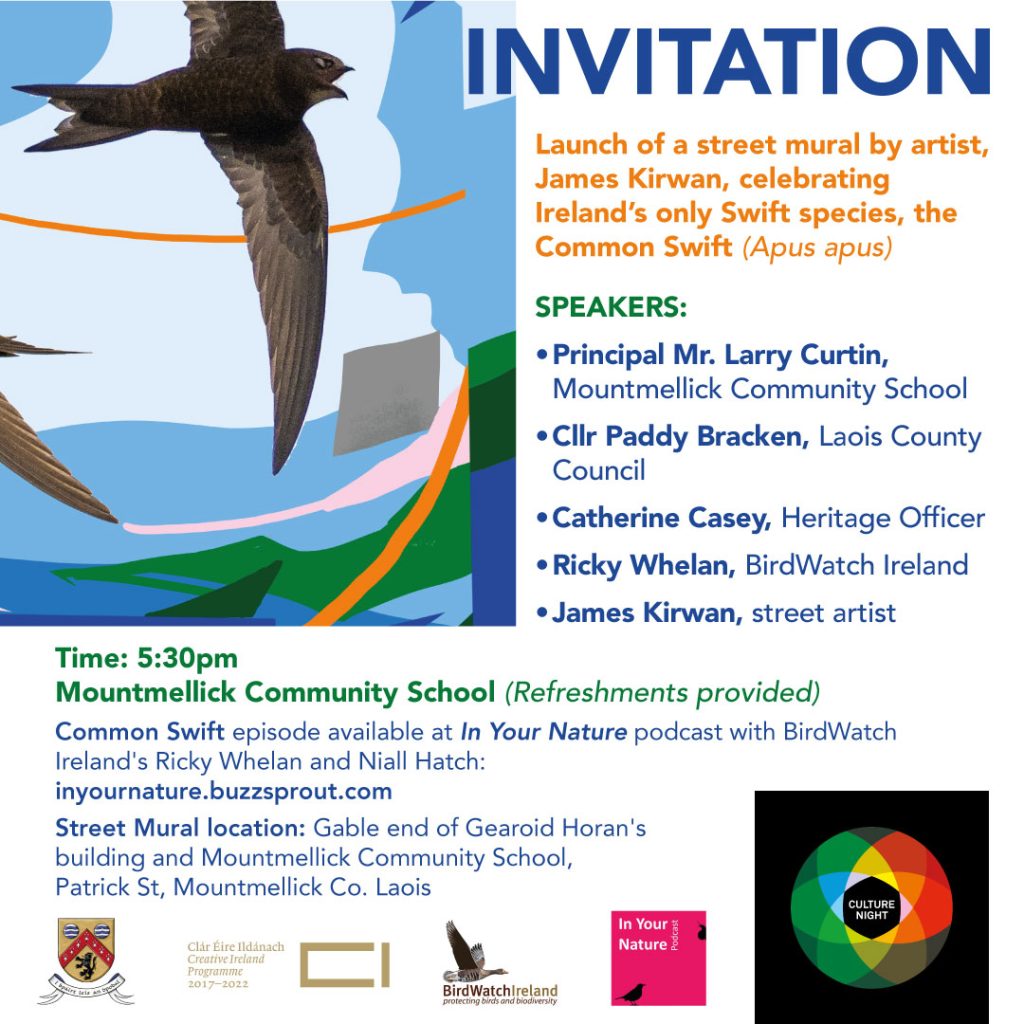 The mural launch takes place on Fri Sept 23rd at 5.30pm at Mountmellick Community School. The Swift episode reissue is available at BirdWatch Ireland’s ‘In Your Nature’ podcast on Buzzsprout or any good podcast provider. ‘In Your Nature’ is produced in partnership with the Heritage Offices of Laois and Offaly County Councils, supported by the Heritage Council and the Department of Housing, Local Government and Heritage, and is edited by Ann-Marie Kelly.

Laois County Council and BirdWatch Ireland are very grateful to Gearoid Horan for giving permission for the use of his building for the mural, and also sincere gratitude for the support of Principal Larry Curtin and Deputy Principal Frances Kerry – La Rosa of Mountmellick Community School.

The Mountmellick Swift Project mural is supported by Creative Ireland Laois as part of the Creative Ireland Programme – in partnership with Laois County Council Heritage Office and BirdWatch Ireland.