The effigy of Robert Hartpole, Constable of Carlow Castle was returned to Carlow Town on Wednesday October 13th, 2021 after a sojourn of approximately two hundred years in Portarlington, Co. Laois. For the last thirty years or so the effigy was on display in the People’s Park, Portarlington, Co. Laois. Over the past couple of years Carlow County Museum, operated by Carlow County Council, have coordinated the conservation of the 16th century effigy and its relocation back to Carlow Town and Hartpole now resides in Carlow County Museum.

Robert Hartpole, Constable of Carlow Castle, High Sheriff of Carlow, and Laois in the 16th century died in 1594. As was his wish, he was laid to rest in the Church of the Blessed Lady the Virgin Mary in Carlow. This was the church associated with St Mary’s Abbey, which is placed by a number of sources somewhere between the present-day St Mary’s Church of Ireland church and the Castle Hill Centre. The remains of Carlow Town’s oldest graveyard are still to be found in this area.

The effigy (a carved likeness of a person) is cut from a single block of Co. Carlow limestone, depicting a knight in full armour. The knight’s head, now missing, was resting on a helmet, his hands are folded over his chest. A dog lies at the knight’s feet, whose head is also missing.  A Latin inscription carved along the side of the effigy once read “Hic jacet Robartus Hartpoole, Conestabulrius de Catherlagh, Septuagenario maoir, interiit iii die Octobris 1594”, (translated to say: ‘Here lies Robert Hartpole, Constable of Carlow, he died on the 3rd day of October 1594, being more than a septuagenarian’. Some of the inscription still remains including the date 1594. This effigy was placed on top of his tomb. 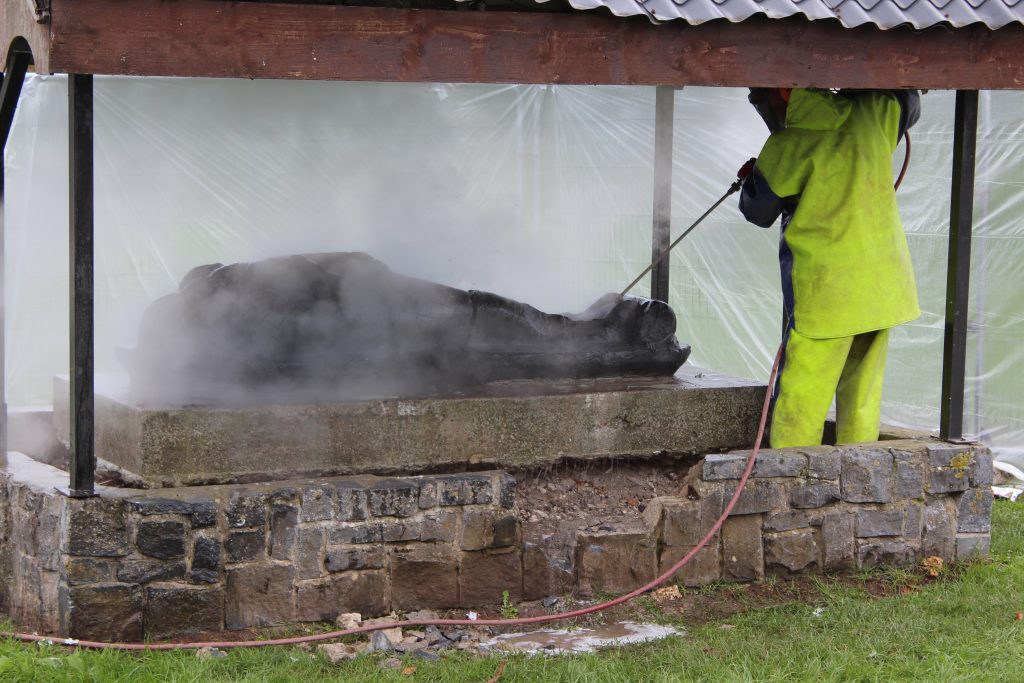 The effigy was rediscovered in 1809 and was moved from Castle Hill to Oak Park, Carlow, to protect it. Sometime later in the 19th century it was moved by descendants from Carlow to Kilnacourt House, Portarlington, Co. Laois. This move was possibly undertaken by a canal boat as the River Barrow was a thriving business thoroughfare. In the mid-20th century, the effigy ended up in the possession of Laois County Council. They, with the assistance of local people displayed the effigy in the People’s Park under a roofed steel construction. Unfortunately, despite this public display, the effigy has suffered damage from anti-social behaviour, damage from its frequent relocations, its exposure to the weather, and the splitting and localised polishing of the stone. The effigy is also a recorded National Monument, LA005-032, and therefore comes under the protection of the National Monuments Acts 1930 – 2014.

Earlier this year the Museum applied to the Department of Housing, Local Government and Heritage under their Community Monuments Fund 2021 grant scheme and was successful in receiving a grant to cover the conservation and relocation of the effigy. Gebel and Helling Stone Conservation, Cork, and Tipperary, were the appointed contractors and works took place in both Portarlington and Carlow County Museum from Tuesday 12th to Friday 15th of October. It was appropriate that they works took place in October as he died in October 1594. In Portarlington the effigy was treated and given a series of steam cleans to remove paint, graffiti, dirt, and organic growths. Then he was delicately separated from his concrete plinth and as he is now in two large sections, weighing up to 200kgs, he was mechanically lifted onto a large trailer for transport to Carlow. In Carlow County Museum a new plinth has been constructed to accommodate him and the stonemasons worked carefully to locate him onto his new plinth. Over the next while the display area around him will be enhanced to details his history and his conservation. 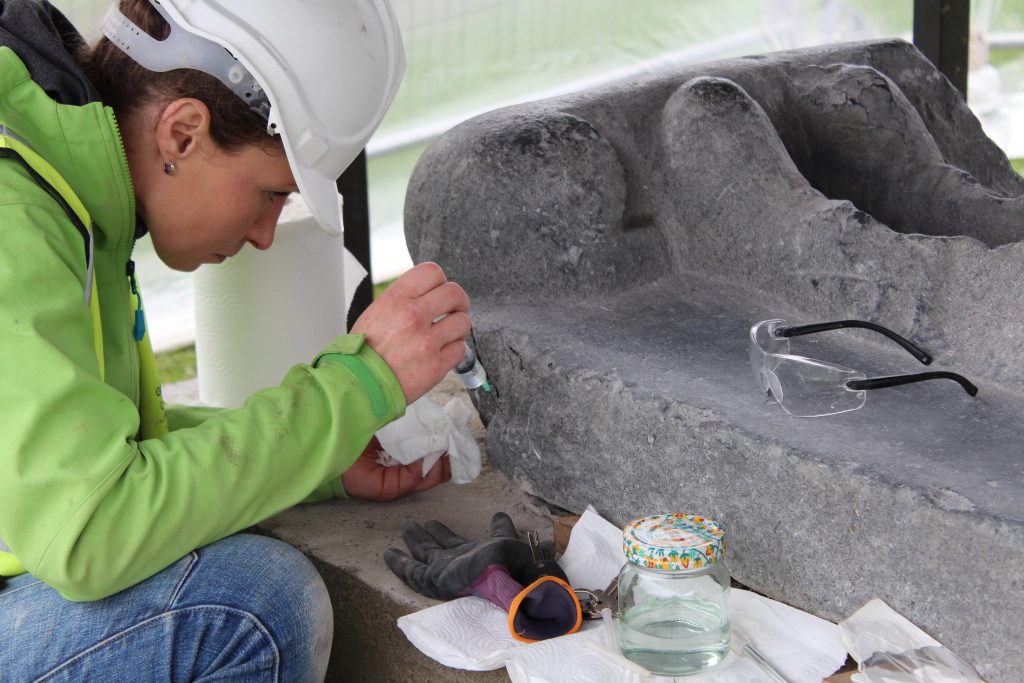 Dermot Mulligan, Museum Curator, Carlow County Museum, and project coordinator said “we are delighted to welcome back to Carlow Town, after nearly two hundred years, the effigy of Robert Hartpole. While he is a controversial character, he was the Constable of Carlow Castle, from hence he shaped and influenced our town and county during the 16th century. The effigy is a piece of our town’s heritage and a fantastic specimen of our local limestone and probably local craftsmanship. Its conservation and relocation has been a cooperative multi-agency approach with the care and conservation of the effigy remaining the priority throughout the process”.

Catherine Casey, Laois Heritage Officer, said “We were delighted to work with our colleagues in Carlow County Council, the National Museum and the National Monuments Service to restore this enormously valuable piece of Carlow heritage to its rightful home. The decision to display the effigy in the town park in Portarlington was taken many years ago and while it certainly saved the effigy from being lost forever, it was not an appropriate place to display such a sensitive monument. Hartpole had no connection to Portarlington, and a grave monument – especially that of a 16th century Knight – should be protected and presented to the public in a sensitive and responsible manner. This project has been a testament to the strong ties of co-operation that exist between Laois and Carlow and we look forward to continuing co-operation on a range of heritage issues. We are grateful to the National Monuments Service of the Department of Housing, Local Government and Heritage for their funding support for the conservation and relocation project, through the Community Monuments Fund.”

John Kelly, Editor of Carloviana, who has researched Hartpole and was anxious that the effigy be conserved said “the Robert Hartpole that emerges from history is rightly viewed as a rapacious land grabber, a ruthless soldier of severe temperament and having of a single-minded ambition to climb to the top of the social ladder. However, Hartpole also had a more enigmatic side. In common with other figures of the period he had ambiguous loyalties; he retained his Catholic faith, he married a Gaelic Irish woman, an O’Byrne from Tullow, and in at least one account is said to be a ‘maintainer of rebels’.”

The effigy of Robert Hartpole can be viewed on permanent display in Carlow County Museum where admission is free. 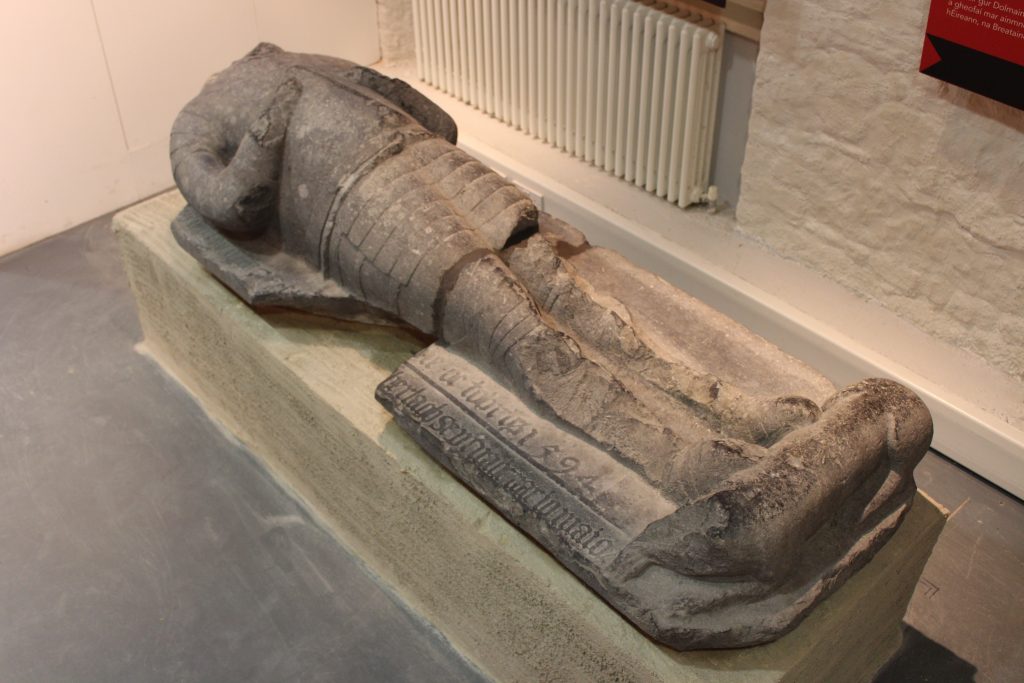