Portlaoise aviation history will be to the fore for this year’s Heritage Week, August 14th to 22nd, with three events celebrating the huge contribution the town has made to Irish and international aviation and exploration.

The Portlaoise Plane, a monoplane designed and built in Aldritt’s Garage Portlaoise by Frank Aldritt and his sons – the first plane to be built and take to the air in what is now the Republic of Ireland – will be on display to the public for the first time at a special event in Fitzmaurice Place Portlaoise on Saturday 21st August at 6pm. 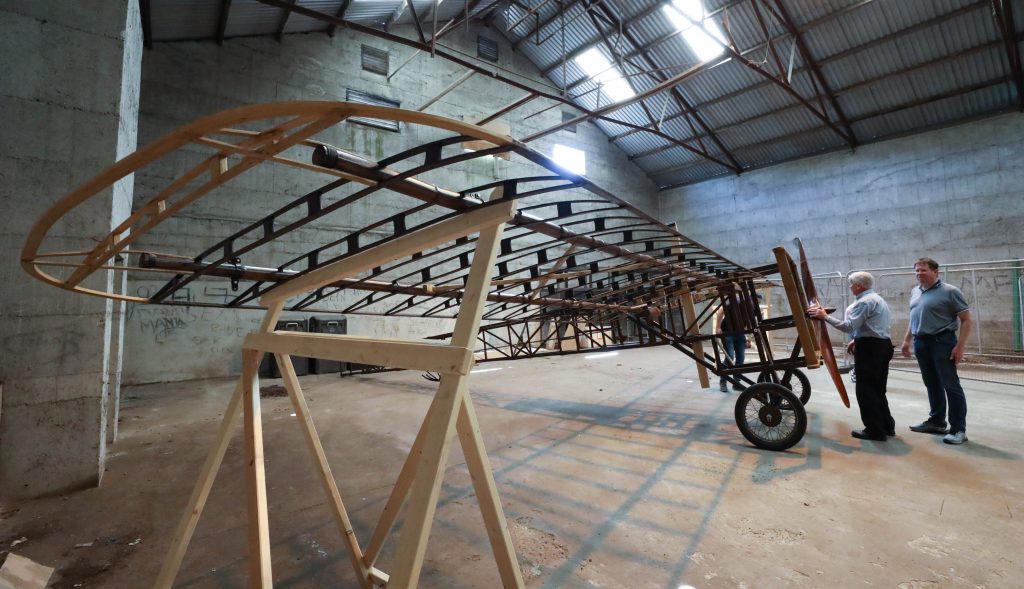 The Portlaoise Plane, the plane built by Frank and Louis Aldritt in the early part of the 20th century has returned home to Portlaoise.
Picture: Alf Harvey.

The event will also feature a Guard of Honour by the Irish Air Corps and a performance of a specially commissioned piece of music by Martin Tourish and the Music Generation Laois Trad Orchestra. Entitled “The Impossible Dream” and inspired by the life of Col James Fitzmaurice, the music was commissioned with the support of the Creative Ireland Laois Programme in partnership with Laois County Council and Music Generation Laois. Attendance at the public event is free but booking is required due to Covid restrictions, see www.portlaoiseplane.com for details on how to book.

The plane, which hung in the rafters at Aldritts for 60 years before being sold to a private collector in England, was located by Portlaoise native Joe Rogers. After a few visits to the collector’s museum by local enthusiasts Teddy Fennelly and Alan Phelan, the plane was purchased by Teddy and brought back to Ireland in 2018. It has now been fully restored by aviation engineers Brendan O’Donoghue and Johnny Molloy and was returned to Portlaoise in July of this year. As part of the restoration project, Alan Phelan, CEO of APTN Aero and member of the Col Fitzmaurice Commemoration Committee, commissioned a replica of the original engine. This working engine will also be on display on August 21st. The plane is now in safe storage provided by Laois County Council and the Heritage Week event will mark its first public appearance in over 100 years.

History of the Portlaoise Plane

A local newspaper in Portlaoise reveals how the bamboo shoots used in the plane were salvaged from a forest on the former Coote Estate at Ballyfin, which had been hit by a storm a short time earlier. (Leinster Express, 9 July 1961). The same article states that the propeller was made by Richard P. Bannon of Market Square and that John Conroy, a master wood craftsman from the town’s Main Street, helped formulate the plans and did the carpentry work on the plane. It also mentions William Rogers, father of the afore-mentioned Joe Rogers, as one of those who helped the Aldritts in the construction.

In a link to Portlaoise’s other major aviation story, we know from his own memoirs that a young James Fitzmaurice witnessed the construction of the plane in 1909 and was also present when it made its first short experimental flight. This early exposure to the excitement of flight was credited by Fitzmaurice with inspiring him in his career as a pioneering aviator. For those who would like to hear more about the first East West transatlantic flight, a talk by Teddy Fennelly will be released on Tuesday 17th at 7pm on www.facebook.com/laoisheritageoffice.

The first East West Transatlantic Flight was major international news both in Europe and the US, and was front page news on the New York Times for 19 days after the flight, as the triumphant aviators  – Col James Fitzmaurice of Portlaoise and the Irish Air Corps and his German team mates, Captain Herman Kohl and Baron Von Huenefeld – toured America , receiving the Congressional Medal of Honour from President Calvin Coolidge and being feted by large crowds in cities across the country.

Aviation enthusiast and author of the book “Fitz and the Famous Flight” Teddy Fennelly, has been collecting original archive material relating to the flight and Fitzmaurice for many years and his collection contains many fragile archives – newspapers in particular were never made to last 100 years and had become very fragile. With the help of a Heritage Council Community Grant, these documents have now been conserved by specialist paper conservator Liz D’Arcy. 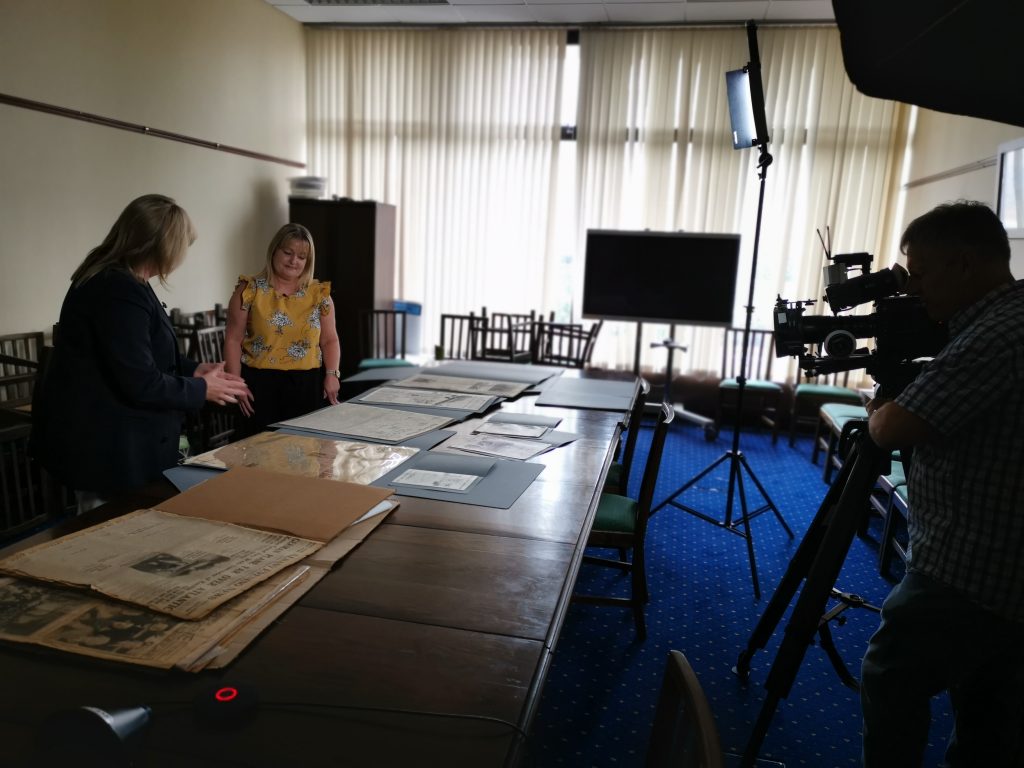 Separately, Liam Byrne from Athlone has also collected a large archive of papers and memorabilia associated with the flight. Both Liz and Liam will be giving a presentation on their work in a live online event on Wednesday 18th August at 8pm. For details of this event and how to book see https://www.facebook.com/laoisheritageoffice

The Portlaoise Plane and the Fitzmaurice connection caught the attention of the team from RTÉ Nationwide and broadcaster Mary Fanning was in Portlaoise in early  August filming for a piece that will go out on the Nationwide programme on Wednesday August 18th. The Nationwide programme will feature interesting heritage stories from all across the country for the week of Heritage Week, August 14th – 22nd.

For more information on the Portlaoise Plane and the Heritage Week events please see https://portlaoiseplane.com

For full details of all events happening in Laois for Heritage Week see www.laois.ie/heritageweek. Events and projects across the whole country for the week are at www.heritageweek.ie . 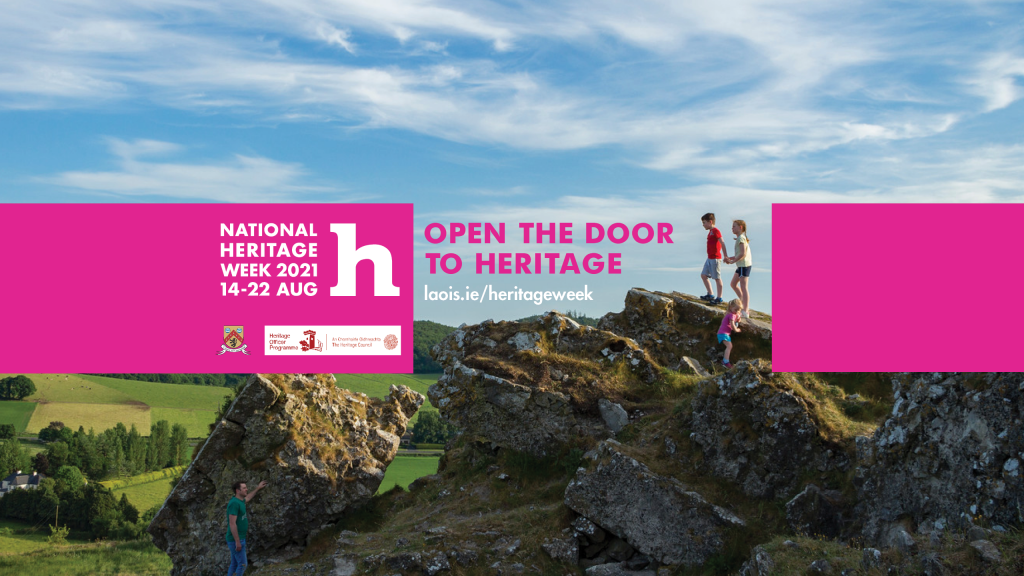