The book – an initiative of Laois County Council with the support of the Heritage Council – is published by Wordwell Books, edited by Peigín Doyle, with contributions from archaeologists Brian Hodkinson and Dr Sharon Greene, early medieval historian Dr Matthew Stout and geologist and ecologist Dr John Feehan. 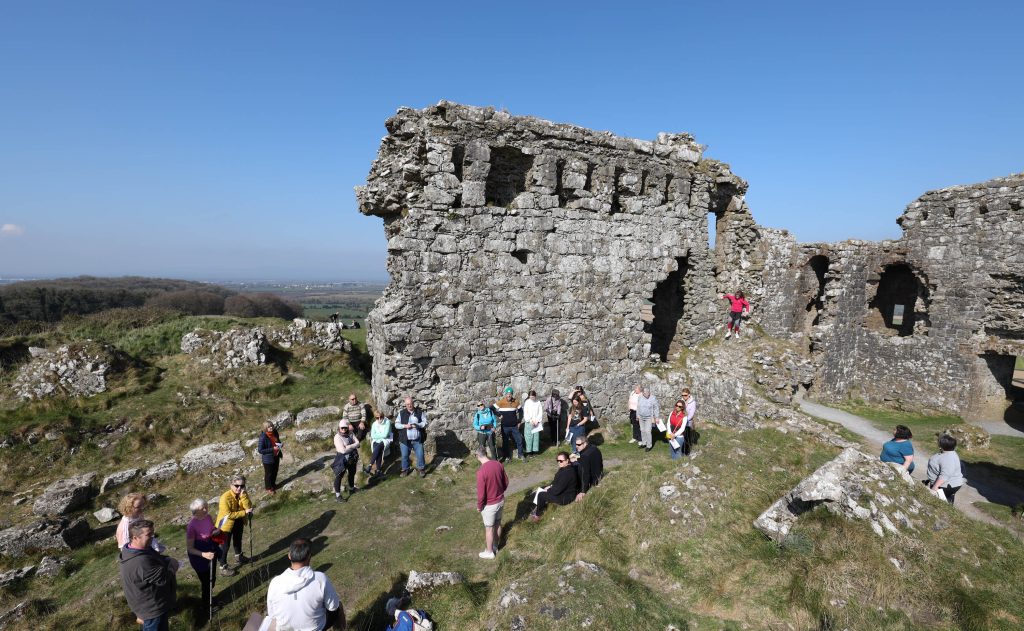 Archaeologist Stephen Mandal from the Irish Heritage School leading a field trip at the Rock of Dunamase looking at the geology, landscape, archaeology and history as part of Know Your Locality. Supported by Creative Ireland Laois as part of the Creative Ireland Programme (2017-2022) in partnership with Laois County Council. Picture: Alf Harvey.

Cathaoirleach of Laois County Council Thomasina Connell said “As Cathaoirleach of Laois County Council I am proud to be associated with this wonderful book on the Rock of Dunamase. It will be a must-read for anyone exploring this fortified crag or learning about the history of Laois. The book is the result of a collaborative process between the Laois Heritage Forum and the Authors, under the expert guidance of Wordwell Books. I’d like to thank all involved and congratulate all the contributing authors and the editor on a truly ground-breaking publication. The continued involvement of the Heritage Council in supporting and developing all aspects of the heritage of Laois must be especially acknowledged.”

While we may not know for sure who actually built, and who later destroyed, the fortifications on Dunamase, the fortress has been a striking presence, a landmark in the skyline of South County Laois since the ninth century. In this beautifully illustrated book with over one hundred vibrant images and reconstruction drawings, The High Fortress: A Guide to the Rock of Dunamase, sees experts sift the evidence to tell the story of Dunamase and its surrounding territory from prehistoric times to the eighteenth century, in a clear, accessible way.

Some of the critical tides in Irish history have ebbed and flowed around the sheer, limestone Rock of Dunamase. The ruins of an Anglo-Norman fortress built over an Early Christian Irish dún, it was fought over, occupied, fortified, reinforced, seized, abandoned, and blown up. Today, silhouetted against the Laois skyline, the stark grandeur of the ruined fastness of Dunamase has the power still to stir our imaginations.

Plundered by Viking raiders in 843AD, it became the dowry of Aoife, the bartered daughter of Diarmait Mac Murchada, when she married Richard De Clare, Strongbow, as the price for the Anglo-Norman invader restoring Diarmait as king of Leinster.

Fortified by a murder hole, arrow slits, portcullis, drawbridge and high protecting walls, the struggles between Gaelic Irish versus invading forces played out around the fortress of Dunamase for centuries. Weapons and armour, buckles and spurs, gaming pieces and arrowheads, Gaelic metalwork and medieval coins, all unearthed in excavations, bear witness to its role as a focal point for critical events in Irish history.

The book will be for sale in local bookshops and at wordwellbooks.com. The launch starts at 7.15pm on Wednesday 23rd November at the Midlands Park Hotel Portlaoise, and all are welcome. 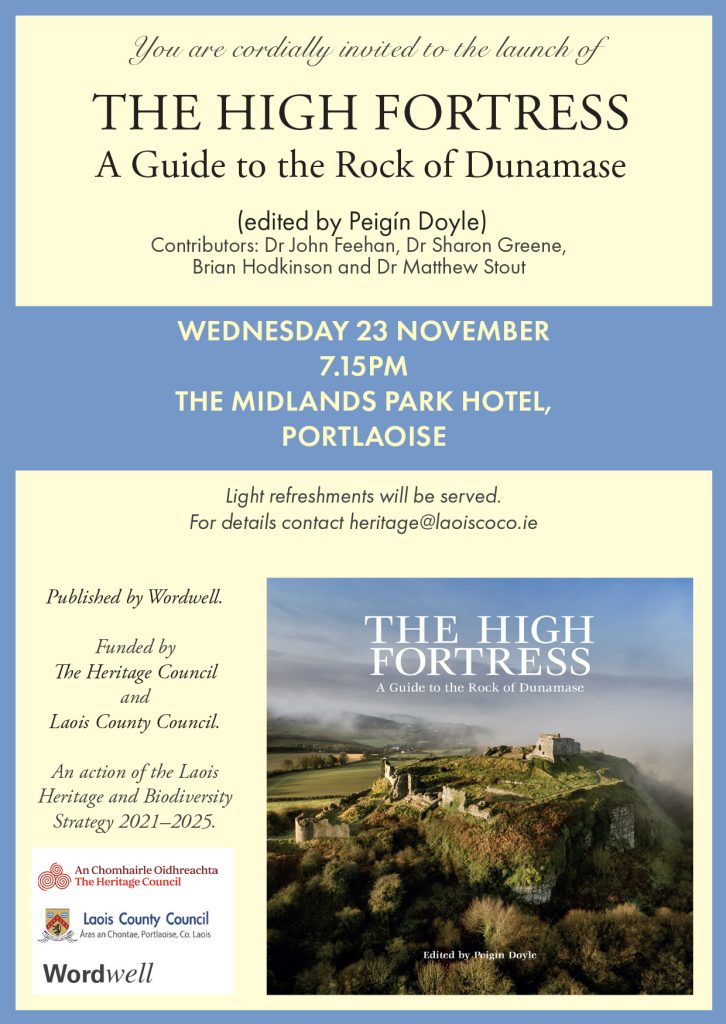 Edited by Peigin Doyle, author and journalist whose specialist areas are history, heritage, and archaeology. Contributors include Dr John Feehan, author of Laois, an Environmental History and The Geology of Laois and Offaly; Dr Sharon Greene, research archaeologist and the editor of Archaeology Ireland magazine; Dr Matthew Stout, author of Early Medieval Ireland 431–1169 and archaeologist Brian Hodkinson who has directed key Irish excavations such as the Rock of Cashel, Nenagh Castle and on Dunamase itself.

THE HIGH FORTRESS: A Guide to the Rock of Dunamase Edited by Peigin Doyle

Funded by the Heritage Council and Laois County Council. An action of the Laois Heritage and Biodiversity Strategy 2021-2025