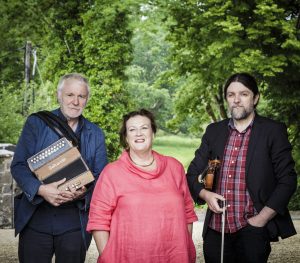 For this very special tour, the swashbuckling musical spirit that has seen Máirtín O’Connor and Séamie O’Dowd dazzle audiences in the past provides an anchor to the shimmering vocals of Maighread Ní Dhomhnaill — with the promise of free-flowing instrumental duos to boot.

Maighread Ní Dhomnaill, winner of TG4’s “Traditional Singer of the Year” award, formed the band Skara Brae before touring the world with Donal Lunny’s Coolfin. She sings and tours most often with her sister Tríona and their recent concert performances with Martin Hayes, Denis Cahill and David Power have met with widespread critical acclaim.

Máirtín O’Connor’s dexterity and versatility on the accordion have seen him perform with a veritable who’s who of trad legends including Midnight Well, The Boys of the Lough, De Dannan, Skylark and the Riverdance orchestra.

One of Ireland’s foremost trad musicians, Séamie O’Dowd is a renowned multi-instrumentalist most associated with his performances as a member of trad powerhouse Dervish. He has also collaborated with such musicians as Christy Moore, Cathal Hayden, Jimmy Higgins, Tommy Emmanuel, and Liam O’Flynn.