The west of Laois showcased its community champions superbly on Thursday 27th July when Kiln Lane, Mountrath and the community of Rathdowney-Errill greeted the judges in the IPB All Island Pride of Place Competition 2017.

There was no mistaking the pride of local people when they displayed for the judges, all that they have and continue to do to make their local communities better places to live, work and visit.

The residents of Kiln Lane, Mountrath demonstrated for the judges, Rita McNulty and Declan Nelson, how they have come together in many ways to make their local area to improve their estate and surrounding area. They gave the judges a tour of their estate, comprising 90 houses, all mixed use, including local authority, RESPOND and CLUID Voluntary Housing Associations. They introduced their community building, a hub for all the residents’ meetings and activities, and their polytunnel maintained by their own horticulture group, assisted in its development by Laois Partnership.

The judges were treated on their tour to Games on the Green and 40’s style soccer, and they met with Kettle Bells champions Margaret McGee and Roisín Toibin. They also visited the Grotto, redeveloped locally on the site of the former Kiln, which is maintained by the residents and is an important part of parish life in Mountrath.

Thursday afternoon saw the people of Rathdowney and Errill pulling out all the stops to greet the judges. The community of Rathdowney-Errill entered in the Population 1,000 – 2,000 Category, presented their local area in all its glory and displayed to the judges, despite recent recessionary challenges, the resilience of this community to continue to improve and develop from both a social and an economic perspective. Following a presentation in St. Fergal’s College, at which local poet Michael Creagh recited his poem “My Town – Rathdowney”, the judges visited local history sites and local businesses. They also viewed the recently renovated convent school, which now houses a Youth Cafe and a Men’s Shed. Rathdowney-Errill Choir sang their rendition of “Lovely Rathdowney” at the local Shrine, which will be among the sites of future redevelopment in the town, along with 5 units of local authority housing to be constructed in 2018. The judges visited Cuan Bhríde housing and social services complex and finished their tour in the village of Errill, where they were met by local Tidy Towns representatives and entertained by local set dancers and Scór na bPáistí Co. Laois winning singer, Lucy Barton.

The judges were accompanied during the day by Cathaoirleach, Cllr. Padraig Fleming and local elected members and public representatives, all of whom spoke of the enormous benefits to the county of the work and co-operation that Pride of Place brings.

Mr. John Mulholland, Chief Executive of Laois County Council praised both communities for their excellent work and pride that they have taken in their local areas, particularly the participation of young people. He acknowledged the assistance of all the local and national agencies in the process of the social, cultural and economic development of our county. He particularly referred to the strides that have been made by these entrants in the past number of years to successfully make improvements and develop their own communities.

Pride of Place, now in its 15th year, is sponsored by Irish Public Bodies Insurances Ltd and hosted by Co-operation Ireland under its Local Authority Programme, comprising officials from authorities in both parts of Ireland. The aim of the competition is to recognise initiatives taken by local communities to create pride in their area and to celebrate the vital contribution that community groups make to society. The competition focuses on people coming together to shape, enhance and enjoy all that is good about their area.

Pride of Place judges Declan Nelson and Rita McNulty congratulated both entries representing Laois in this year’s competition, stating how heartening it is to see local communities making such efforts to sustain themselves and look after each other. They stated that to be chosen by the local authority to represent Laois on the national stage meant they are winners in their own right.

The results of the All-Island competition, which attracts entries from north and south of the border, will be announced by Co-operation Ireland at a special gala event in Donegal in December. 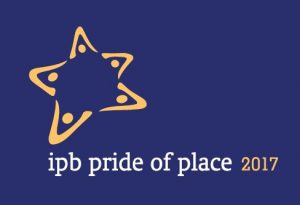