A huge crowd of the local community, family members and military service people attended the unveiling of a commemorative plaque in honour of Sergeant John (Jack) Moyney in Rathdowney on Tuesday (12th September). The event, organised jointly by The Irish Guards, the Royal British Legion and Laois County Council, marked the centenary of the events for which Moyney won the Victoria Cross, during the Third Battle of Ypres (also known as the Battle of Passchendaele) in Belgium, during World War I.

On 12th & 13th September 1917, north of Broenbeek, Belgium, Lance-Sergeant Moyney was in command of 15 men. Surrounded by the enemy he held his post for 96 hours, having no water and very little food. On the fifth day, finding himself surrounded, he and Private Thomas Woodcock led the men in a charge through the enemy to safety. Private Woodcock, who was later killed in action at the Somme, also received a Victoria Cross.

The Rathdowney event commenced with a Parade of Standard of branches of the Royal British Legion, the Irish Guards Association, The Royal Air Force, the Royal Dublin Fusiliers, the Irish United Nations Veterans Association, and a National Colour Party, made up of representatives of the Irish Army bearing the National Flag. 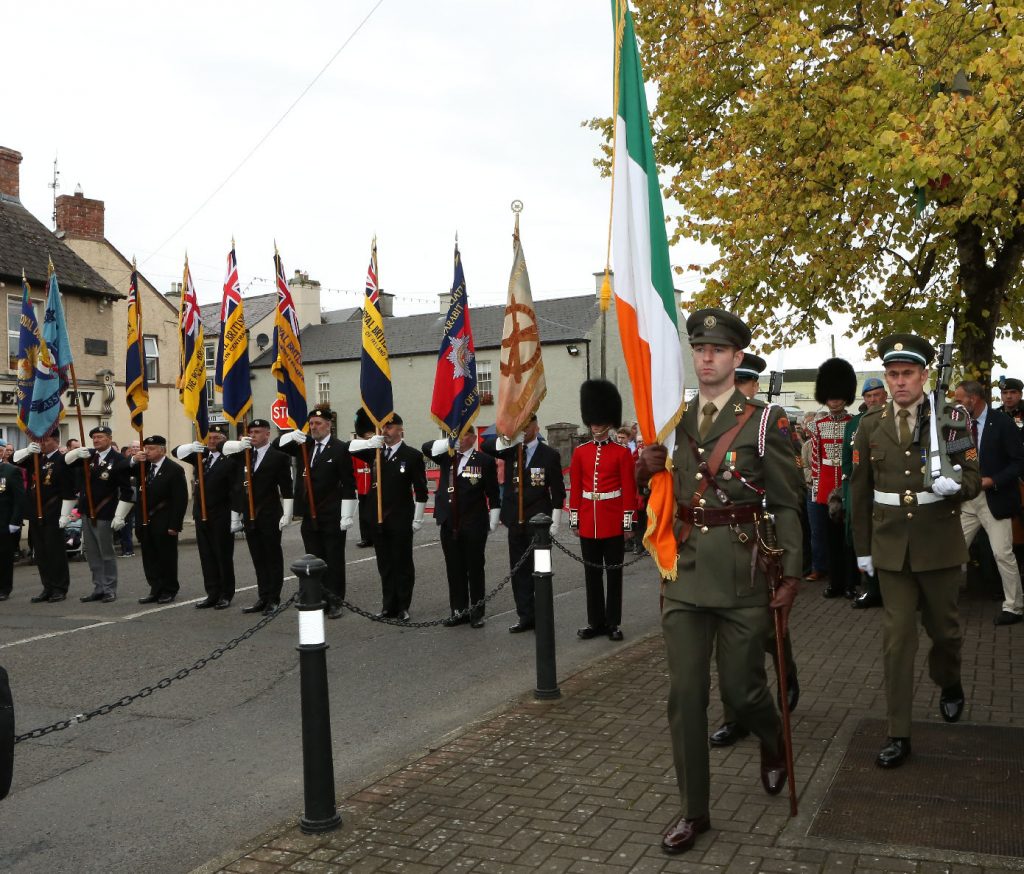 The gathering was addressed by Ian Robertson of the Irish Guards Association Republic of Ireland Branch, who explained that the Victoria Cross paving stone being unveiled was donated by the British Government and is identical to one which will be unveiled to Jack Moyney along with other Irish winners of the Victoria Cross, in Glasnevin Cemetery in November this year. The British Government in donating the paving stones to Glasnevin also made a commitment to fund a second stone to be erected in a place of significance to the individual soldier, if there was sufficient local interest. The hundreds of people who attended the event in Rathdowney this week were certainly evidence of that local interest in Laois. 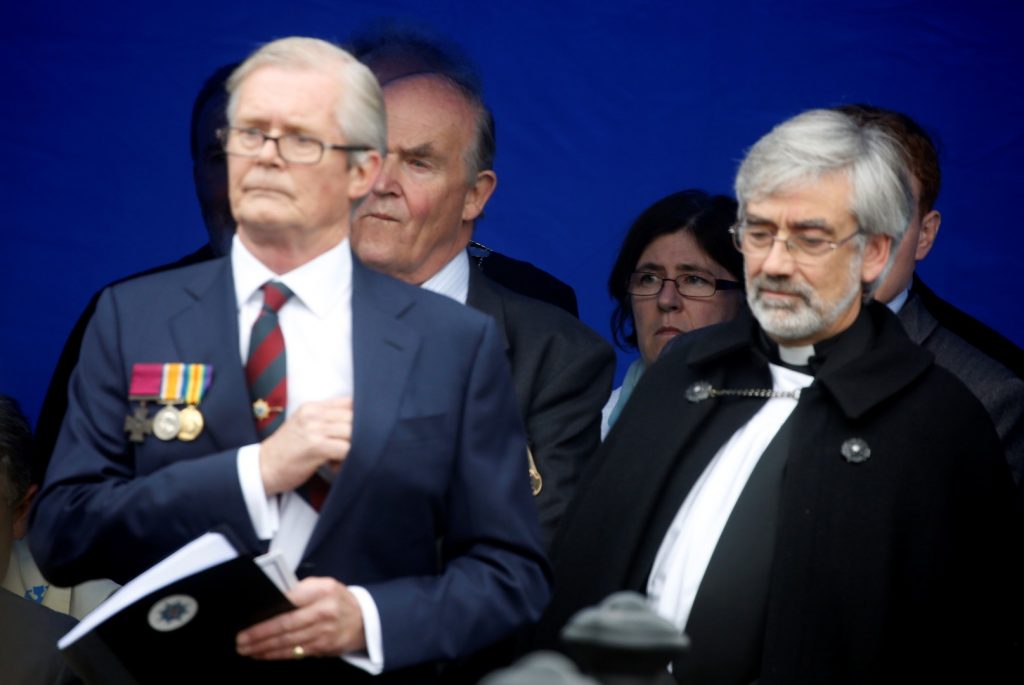 Setting the scene, local historian Barbara Maher gave a moving account of life in Rathdowney in 1917, and read the names of the 40 young men from Rathdowney who enlisted during World War I. A quarter of these men did not return. Journalist Kevin Myers described the great input and impact of Irish born soldiers in the British Army during World War I and recalled interviewing Jack Moyney at his home on Roscrea in the 1970s. He described a modest man, who was nonetheless quietly proud of his contribution. 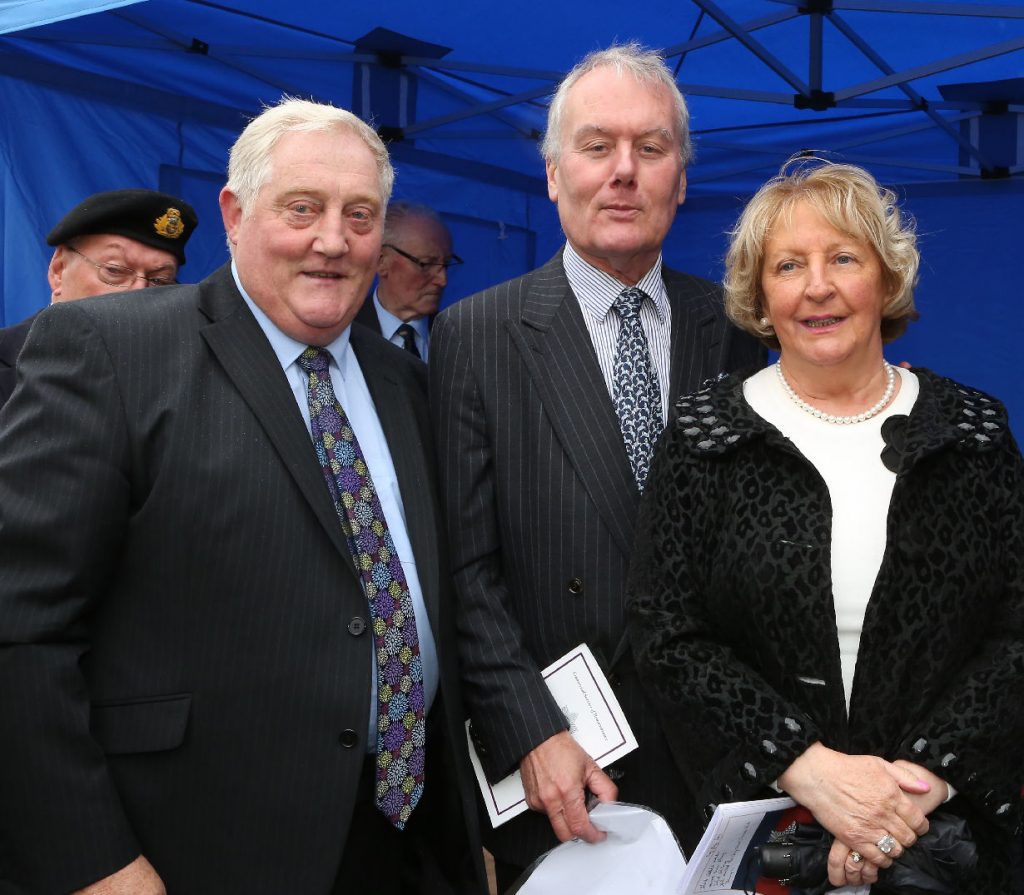 An ecumenical service of remembrance was concelebrated by Fr Martin Delaney Parish Priest of Rathdowney and Rev Richard Seymour-Whiteley of Rathdowney Union of Parishes. Readings were by David Gibson-Brabazon, President of the Midland Counties and Kildare Branch of the Royal British Legion, and by Cllr. Padraig Fleming, Cathaoirleach of Laois County Council.

The commemorative monument was unveiled by Minister for Justice and Equality Charlie Flanagan and Cllr John King of Laois County Council. The monument was created by local craftsmen under the guidance of Cllr John King, and comprises the Victoria Cross paving stone and a plaque describing the actions of Jack Moyney and his later life. The Act of Remembrance by Colonel (Retired) Timothy Purdon OBE, Regimental Adjutant of the Irish Guards was followed by the Last Post and Reveille by a Bugler and a Lament on the Pipes. 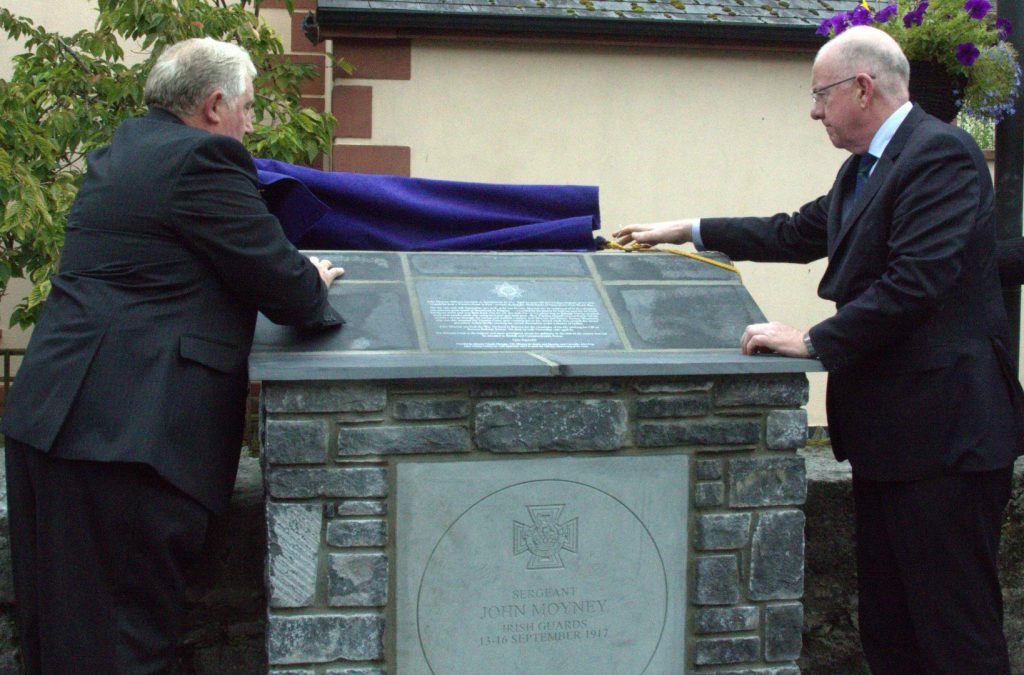 The plaque was unveiled by Cllr John King of LCC and Minister Charlie Flanagan, Minister for Justice and Equality (Photo Patrick Hugh Lynch)

Jack Moyney had five children all now sadly deceased. Following research by Catherine Casey Heritage Officer with Laois County Council, with great assistance from Roscrea Heritage Society, contact was made with members of each of the branches of the family in Rathdowney, Roscrea and further afield. As a result representatives were present of the families of James Moyney, Alice Troy (nee Moyney), Elizabeth Ryan (nee Moyney), Mary Letsome-Moten (nee Moyney), and Bridget Maher (nee Moyney). Grand nephews and grand nieces from the Finane, Brown, Mullins, Campion and other families were also in attendance. Many of the family still live in Roscrea and Rathdowney, but others had travelled from across Ireland and the UK to attend the event. 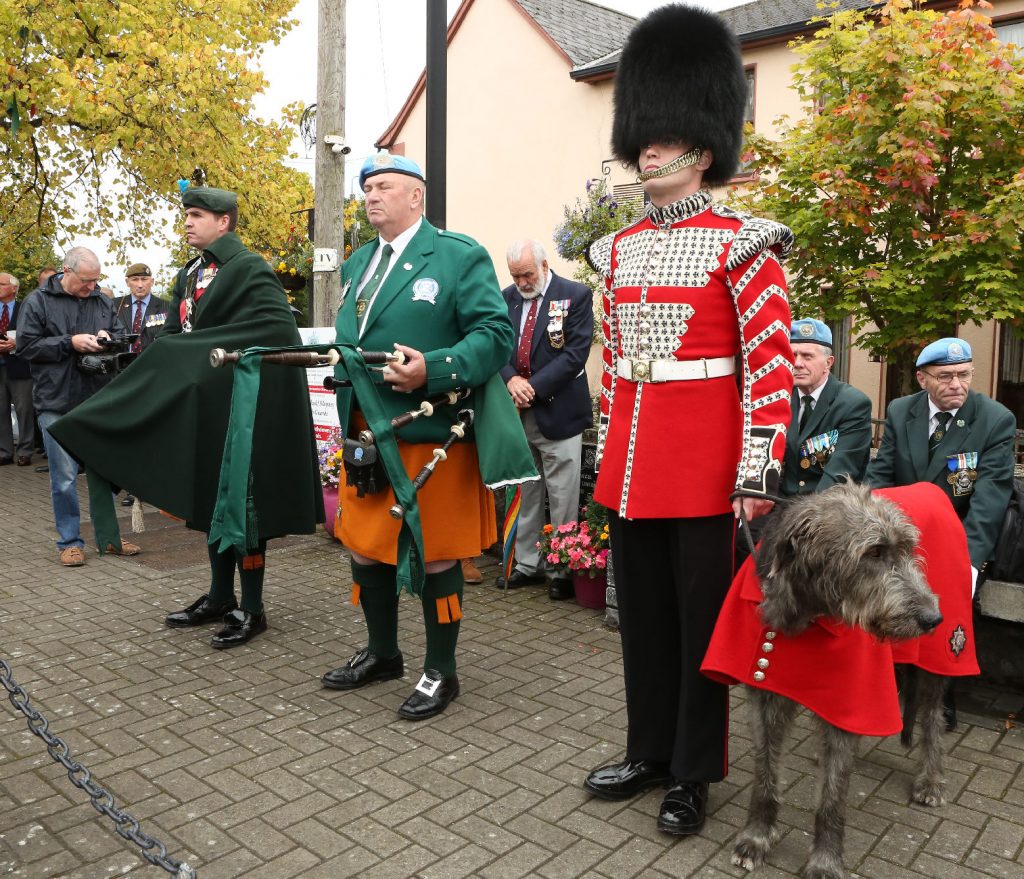 Following the unveiling of the monument, John Moyney, Grandson of Jack Moyney, spoke movingly of his memories of his grandfather, on behalf of the wider Moyney Family. Despite the driving rain, the large crowd, which also included children from St Fergal’s College Rathdowney and each of the town’s two primary schools, remained in respectful attendance throughout. The ceremony ended with the laying of wreaths by the British Ambassador Robin Barnett, Minister Charlie Flanagan, and representatives of the Royal British Legion and the Irish Guards. Floral tributes were laid by each of the Five branches of the Moyney Family, by Cora Percival (Rathdowney), John Ryan (Roscrea), Emily Moyney (UK), Michael Maher (Kerry) and Catherine Grimes (UK). 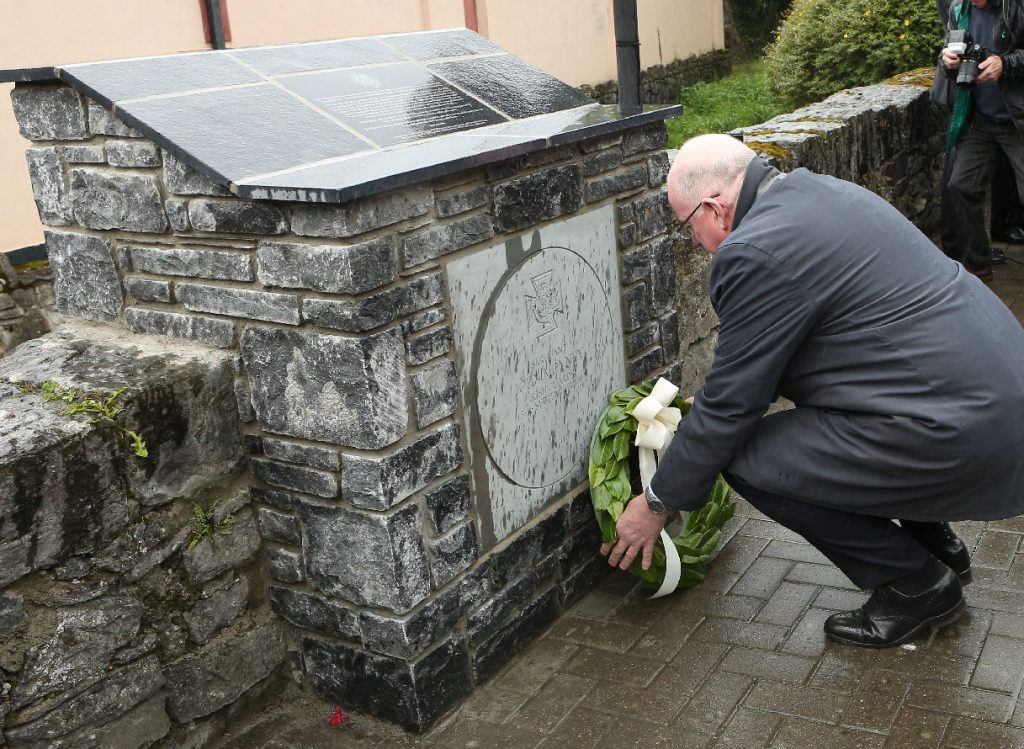 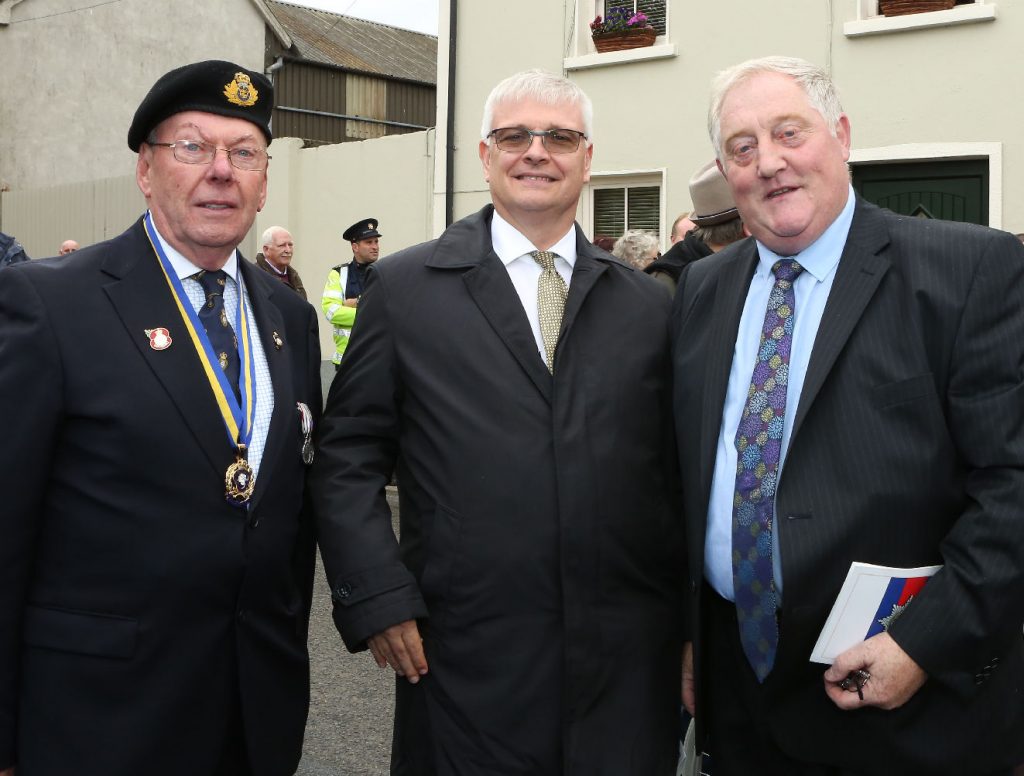 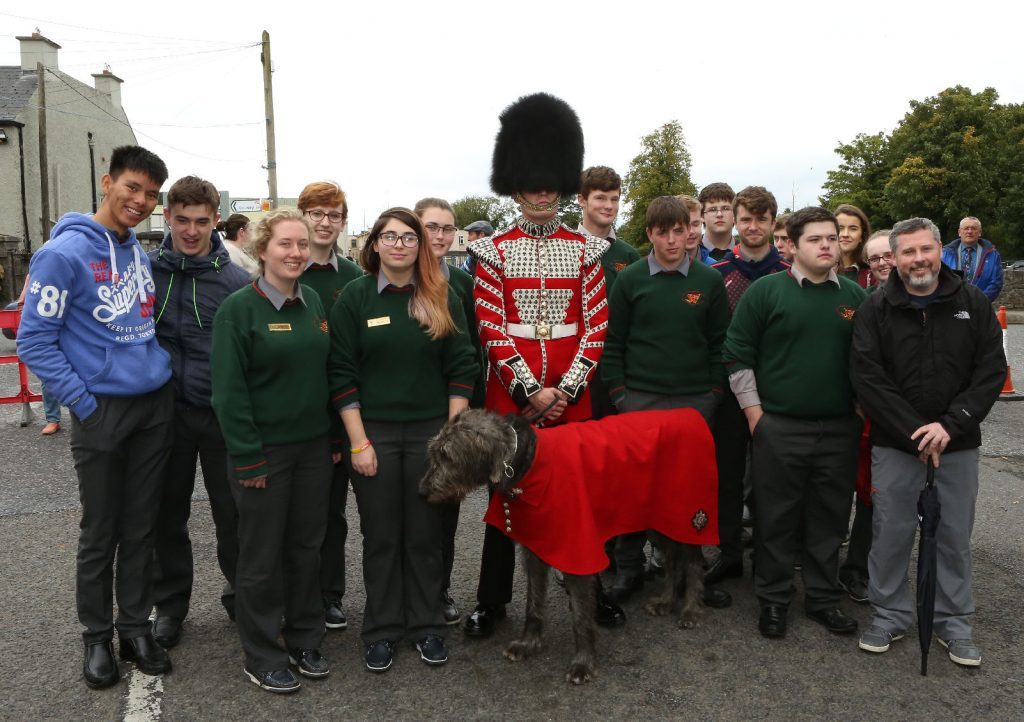 Pupils from St Fergal’s College Rathdowney with a representative of the Irish Guards and the Regimental Mascot, an Irish Wolfhound named Domhnall (Photo Michael Scully) 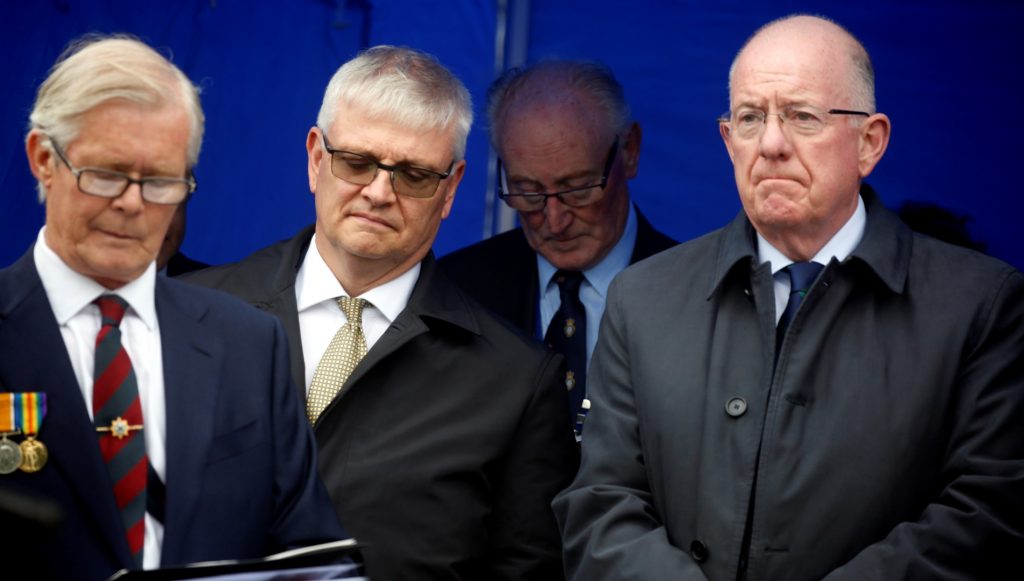 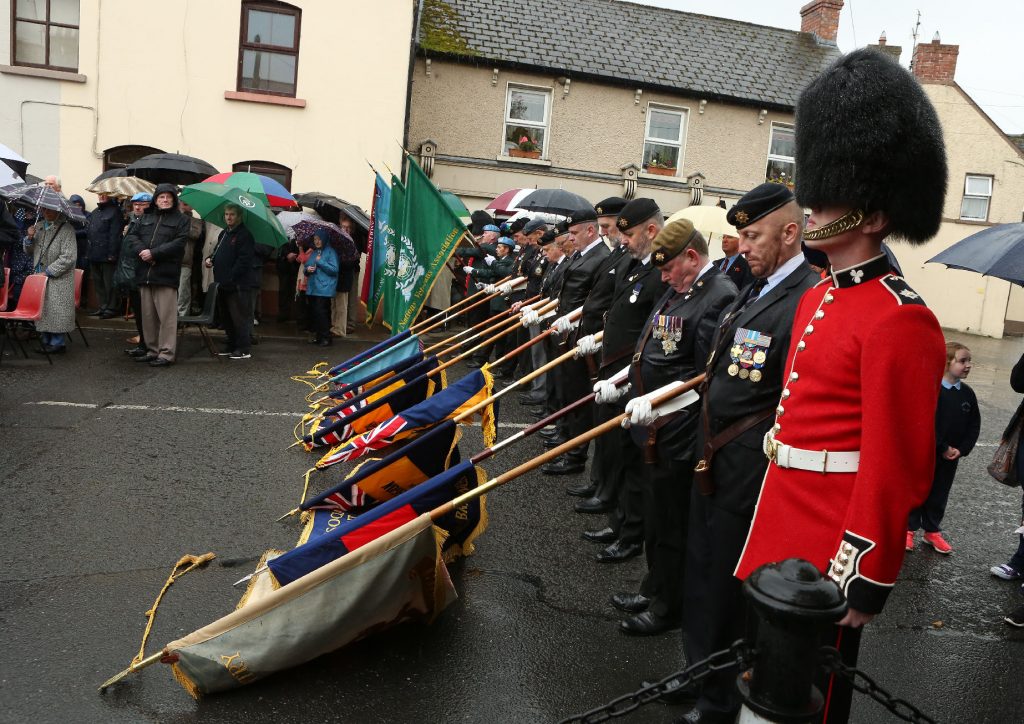 Lowering of Regimental Standards during the lament (Photo Michael Scully) 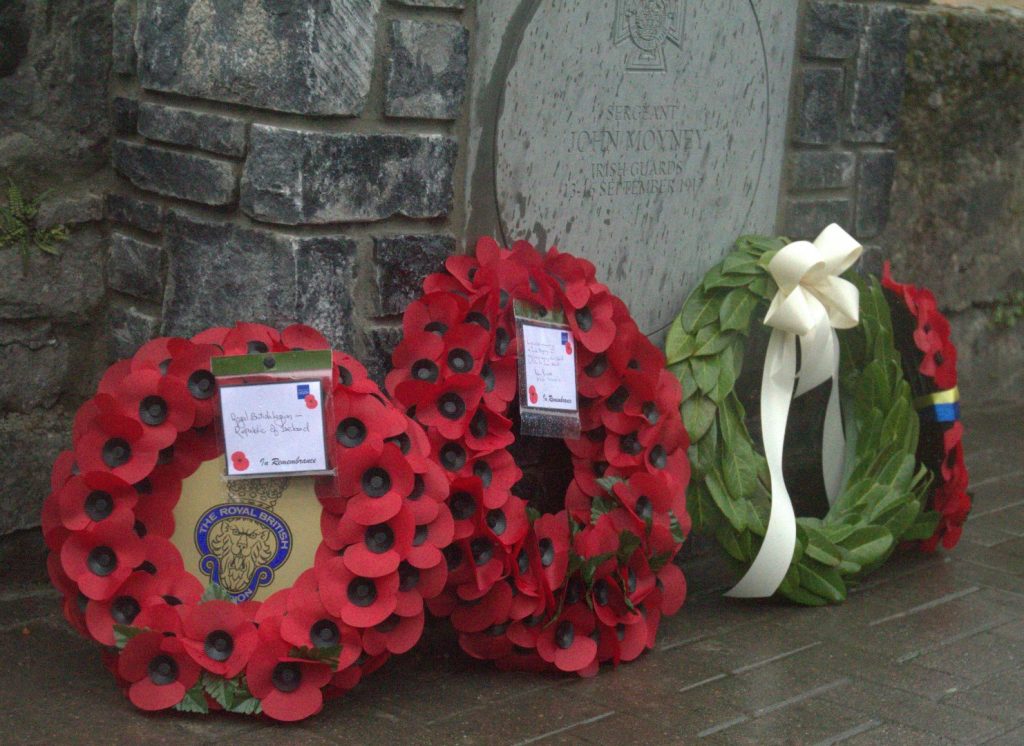