The Festival of Flight is shaping up to be a major event in Laois, with plans for arts and science workshops, talks, music and historic plane fly-overs. The event which takes place in Portlaoise from the 7th to the 10th of April, will celebrate the rich history of flight in Laois. 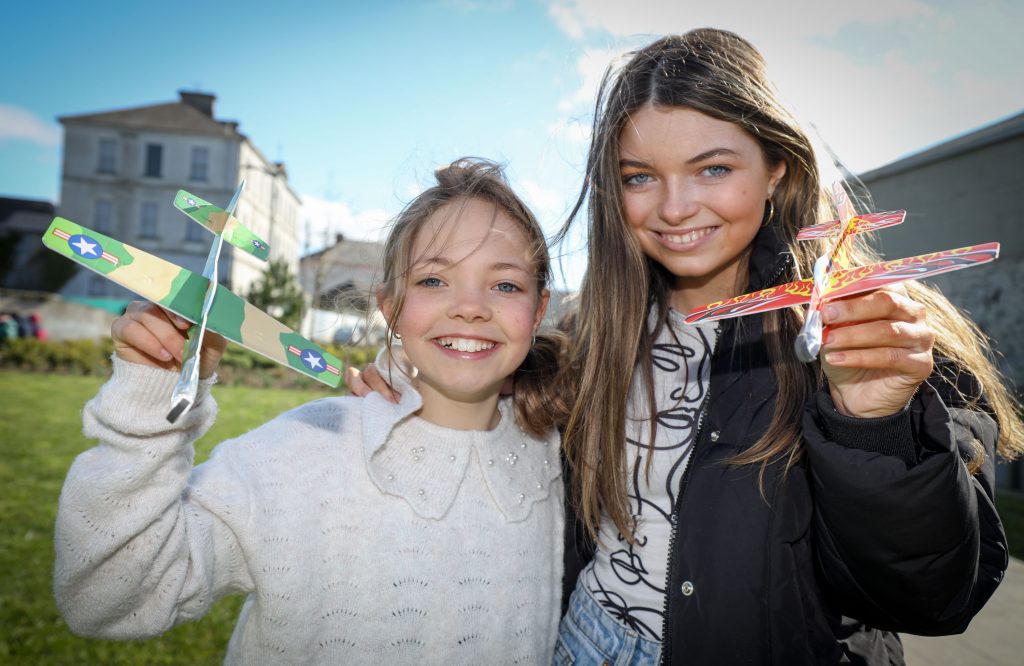 Grace and Millie Fennelly at Fitzmaurice Place, Portlaoise for the launch of the new Festival of Flight being held in Laois from Thursday 7 April until Sunday 10 April.
Picture: Alf Harvey.

One of the main events of the weekend will be a live performance of the Impossible Dream, the piece composed by Martin Tourish and the young musicians of the Music Generation Laois Trad Orchestra to celebrate the life and achievements of the Portlaoise Aviator James Fitzmaurice. The piece will be performed as part of a special event at St Peter’s Church of Ireland Church in Portlaoise starting at 3pm on Saturday 9th April and will also feature talks on the history and future of aviation and exploration in Laois and Ireland and a special performance by poet Laura Murphy. Tickets for the event are priced at €10 and are available via the Dunamaise Arts Centre, www.dunamaise.ie.

Schools workshops on the art and science of flight

Premiere online of the new video “Science at Home by Midlands Science, featuring the Portlaoise Plane

Schools workshops on the art and science of flight

Free family workshops on “Flights of Fancy” at the Dunamaise Arts Centre – see Dunamaise.ie for booking

Portlaoise Plane on display, Fitzmaurice Place from 11am to 3pm 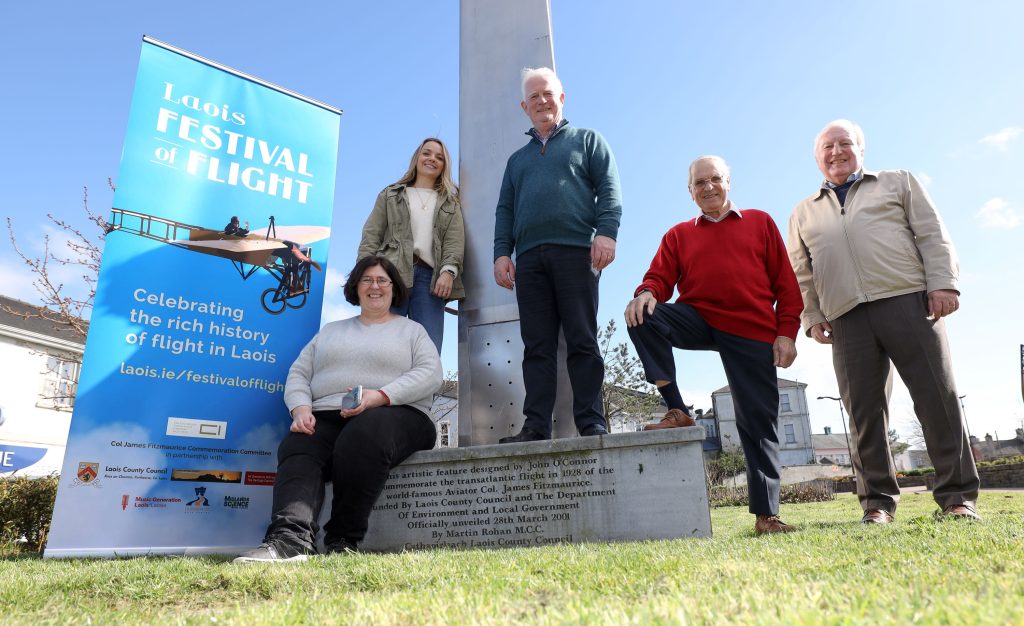 Teddy Fennelly, Chair of the Colonel James Fitzmaurice Commemoration Committee, organisers of the festival said “We are so happy to share our love for flight and aviation with the public through this Festival. Portlaoise and Laois have so much to be proud of in the achievements of Col Fitzmaurice and the building of the Portlaoise Plane, we think the story deserves to be better known and we hope this festival l will fire up the enthusiasm and imagination of Ireland’s next generation of young explorers. We are particularly happy that our friends in the Irish Air Corps will be involved again this year – in this the centenary year of the foundation of the Air Corps, the links between Portlaoise and the Air Corps are continuing to strengthen”

As part of the festival, Portlaoise schools have been offered the opportunity to book free workshops looking at all aspects of flight, from how butterflies wings work to how super-heroes fly. Catherine Casey, Heritage Officer with Laois County Council said “We are delighted to deliver science based workshops, exploring the science of flight, and at the other end of the spectrum we want to really open up everyone’s imagination to the creative and playful side of flight, with arts workshops supported by Creative Ireland Laois.  We are allocating workshops to the schools that have applied at the moment and we will also have a workshop for home-schooling families, and public workshops at the Dunamaise Arts Centre on Saturday 9th April as part of the Festival. We really want to inspire children & young people to creatively and imaginatively respond to the theme of ‘flight’. All details are on the festival website, www.laois.ie/festivalofflight”. 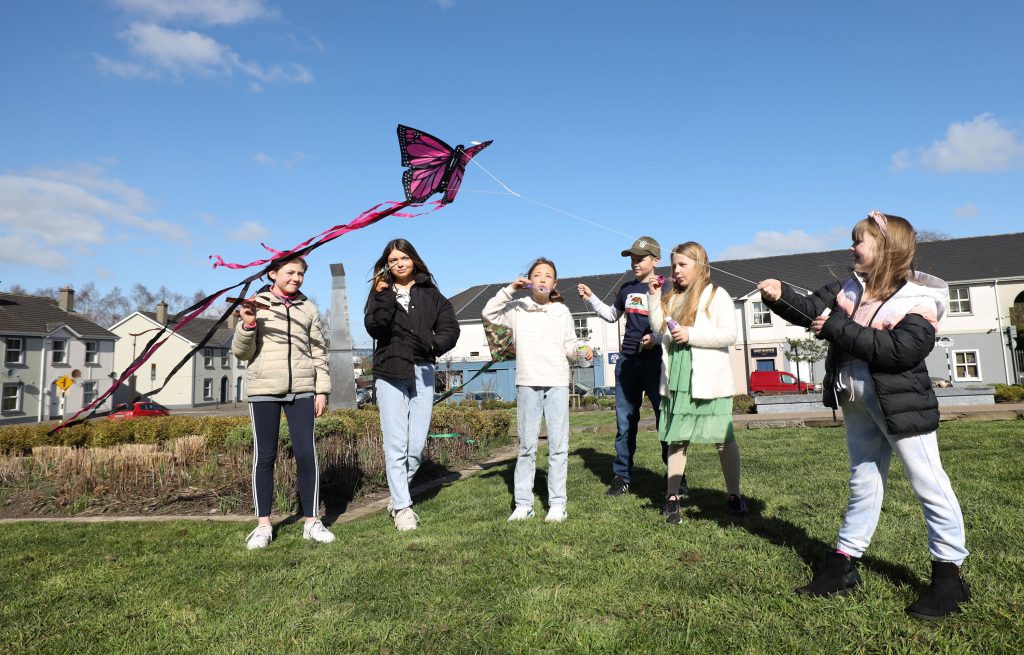 Eva Cahill flying her kite at Fitzmaurice Place, Portlaoise for the launch of the new Festival of Flight being held in Laois from Thursday 7 April until Sunday 10 April.
Picture: Alf Harvey.

The Festival of Flight is led by the Col Fitzmaurice Commemoration Committee, which is made up of Teddy Fennelly, Alan Phelan, Michael Parsons, Louise Cahill, PJ Kavanagh, Ralph James, Sean Murray and Catherine Casey. The event is being run in partnership with Laois County Council, Laois Heritage Society, Music Generation Laois, the Dunamaise Arts Centre and Midlands Science, and is supported by the Heritage Council and Creative Ireland Laois as part of the Creative Ireland Programme 2017-2022 in partnership with Laois County Council.

For details of all events across the Festival, see www.laois.ie/festivalofflight. 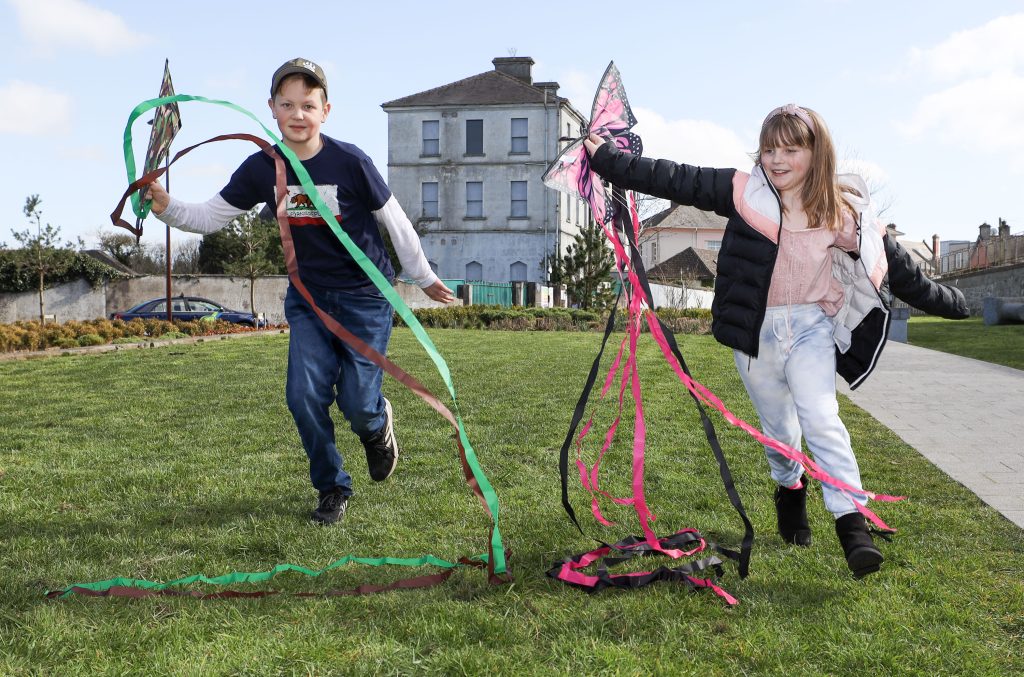 Bobby and Eva Cahill at Fitzmaurice Place, Portlaoise for the launch of the new Festival of Flight being held in Laois from Thursday 7 April until Sunday 10 April.
Picture: Alf Harvey.