A major new conservation project at the core of historic Portlaoise could lead to the regeneration of the old town. The Fitzmaurice Place Regeneration, formally opened on Friday 28th June by Minister Charlie Flanagan, is one of the projects identified in the Portlaoise Vision 2040 Plan published in 2017 by Laois County Council. 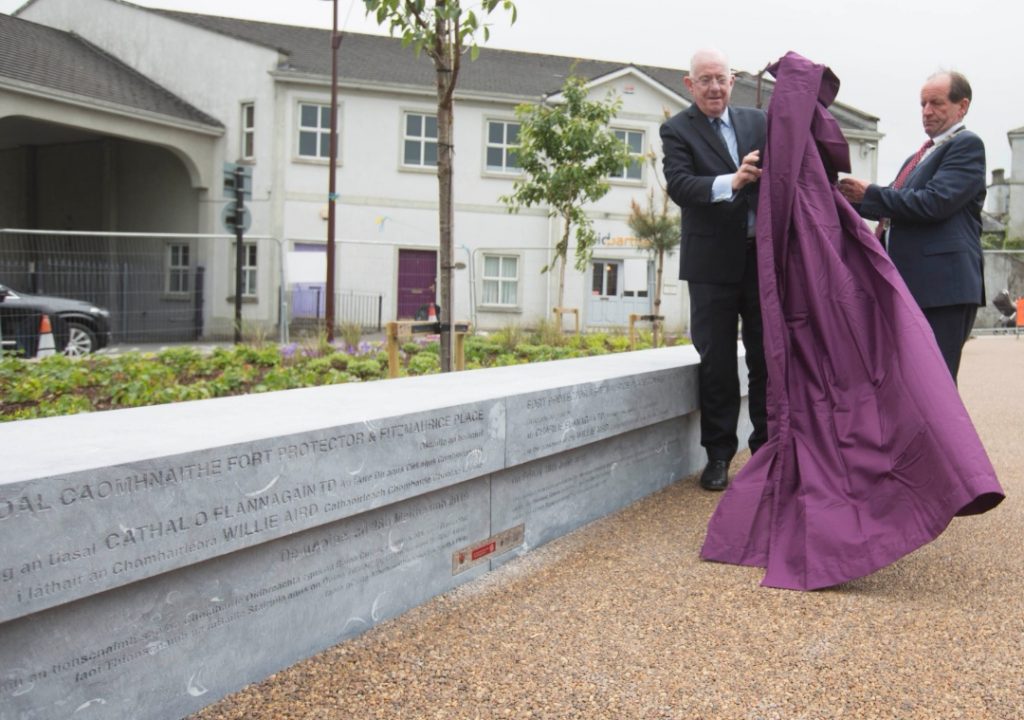 Speaking at the formal opening, Cathaoirleach of Laois County Council, Willie Aird said “This new public space for the people of Portlaoise will help bring life back to this part of town. With the wonderful conservation of the Old Fort Walls, the performance space and the wildlife-friendly planting, the new Fitzmaurice Place makes a great contribution to the culture and heritage of the town. But this is just part of what is planned for the centre of Portlaoise It’s one piece of the jigsaw of what’s needed for the heritage-led regeneration of the town”. 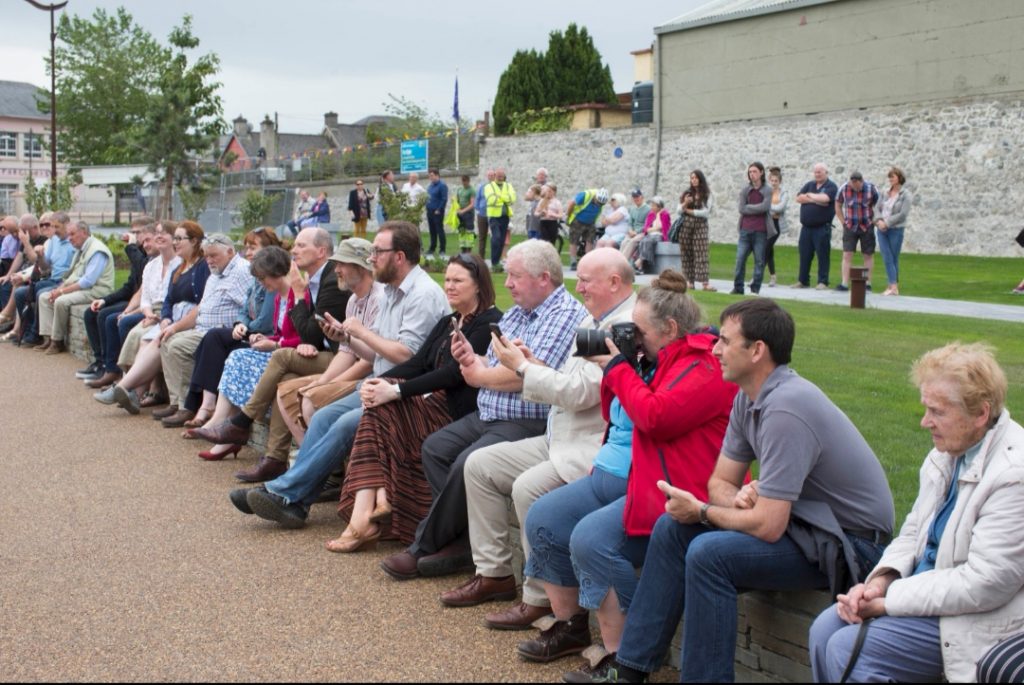 For many years Fort Protector, the 16th century fort at the centre of the origin story of Portlaoise, lay at the back of the Main Street and at the centre of the old part of the town, forgotten by many, and in many ways “hidden in plain sight”. Laois Heritage Society had always known and valued the fort, and in 2015 with help from the Heritage Council and Laois County Council, they started work on a Conservation Plan for the Fort.

This plan was ready to feed into the Vision Statement for Portlaoise published by Laois County Council in 2017, which put a great emphasis on the historic core of the town and the potential for heritage led urban regeneration. The Fort Conservation Plan and the Vision Statement together laid the groundwork for a successful Historic Towns Initiative (HTI) application in 2018. The HTI project was underway when an application for Urban Regeneration Development Funding was successful in early 2019.

John Mulholland, Chief Executive of Laois County Council said “The Fitzmaurice Place project is just the beginning of a two-stage plan to revitalise the 16th Century Fort and the public realm around it. Phase II will commence soon with funding from the Government under the Urban Regeneration and Development Fund. The conservation of Old St Peter’s Graveyard and the conservation and re-use of the former Presentation Convent also form part of the plan to regenerate the historic core of the town”. 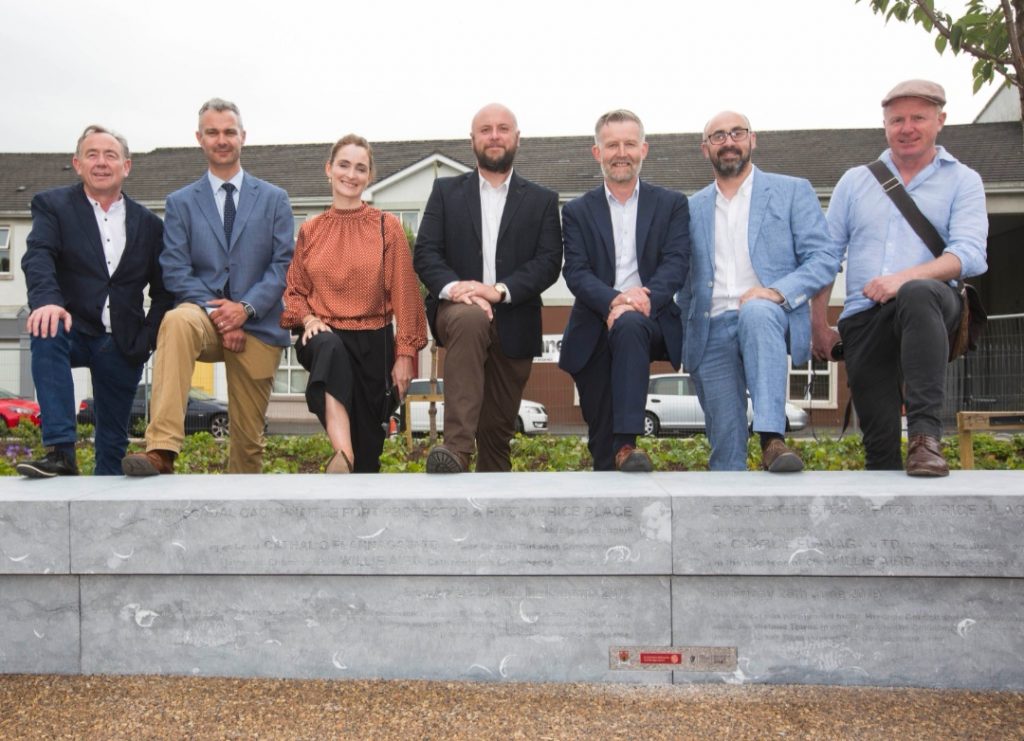 This phase of work involved conservation of masonry of south wall and round baston of 16th century Fort Protector, removal of mass concrete remains of mill below Fitzmaurice Place and upgrading of the public realm (paving, lighting, seating, planting and layout) to architects’ specifications at Fitzmaurice Place. The project also included pollinator-friendly planting and landscaping with wildlife in mind, and the installation of a new performance space with lighting and power.

The site is further enhanced by the installation of two different artworks – there is a new position for the “Eitilt” Sculpture by John O’Connor, commemorating Col Fitzmaurice and the first East West Transatlantic flight, and the installation of “Instruments” by Mary McGinty – representing bronze-age weaponry – from James Fintan Lalor Avenue to a new setting in front of the Fort wall. 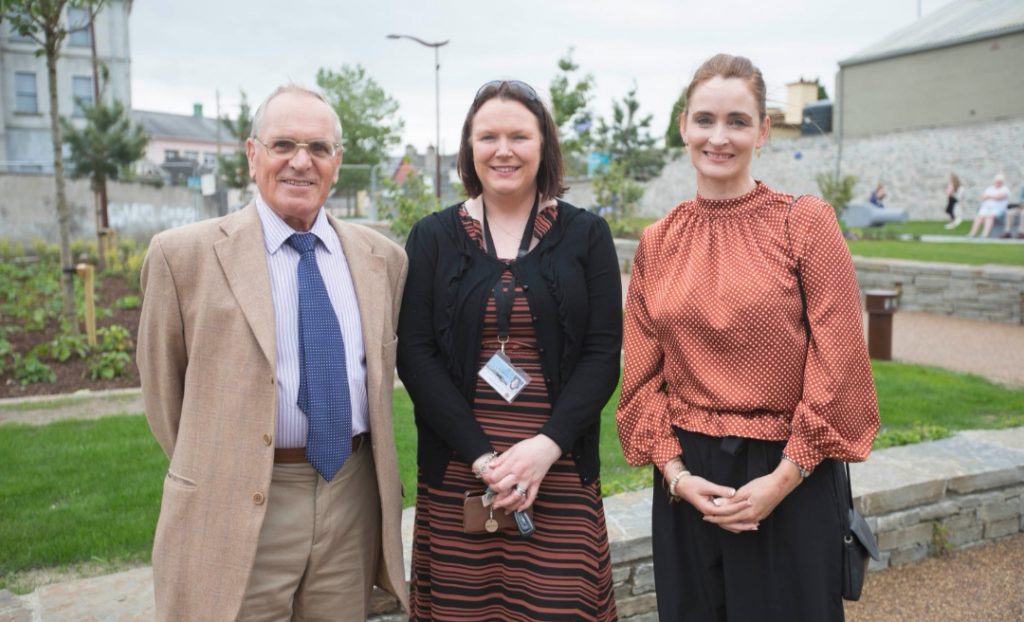 Because the Fort is a recorded monument, all works at the site were planned in consultation with archaeologist Colm Flynn, who was on hand to monitor all the excavation works and report to the National Monuments Service on work carried out. Some delays were caused when the remains of modern-day concrete – part of the mil that was on site until the 1960s – were encountered. This industrial archaeology is an important part of the story of the site, and the remains were fully recorded. The remains of the older mill race on site were also uncovered, and these areas were recorded before being conserved in situ and safely covered back up. A full report on the archaeological aspects of the project has now been compiled and submitted to the Department for Culture. Heritage and the Gaeltacht, in accordance with the project’s archaeological license.

Funding has been granted under Project Ireland 2040 (Urban Regeneration and Development Fund) for Phase II of this project, which involves conservation of the masonry of the Fort Wall on Tower Hill and Railway Street, and the extension of the public realm improvements around the remainder of the Fort Wall. Conservation of Old St Peter’s Church and graveyard on Railway Street are also included, as the heritage of the towns continues to play a major part in its regeneration. 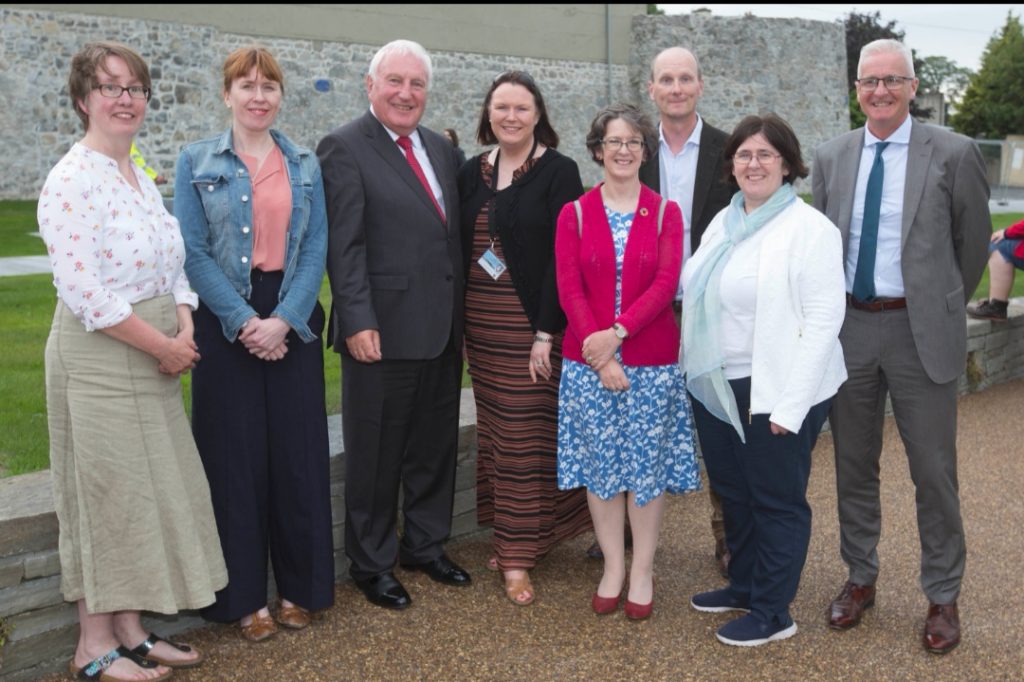