Construction works are continuing for the Portlaoise and Fort Protector Enhancement Project Phase II at Church Street, Portlaoise, Co. Laois. These works include the removal of overhead powerlines and associated ESB poles, and the construction of new underground ducts for services. The works area taking place along the path and roadway beside the northern wall of Fort Protector which is a known and legally protected archaeological site. The ground disturbance works are being archaeological monitored, which is being carried out under archaeological licence 18E0339, by archaeologists from Colm Flynn Archaeology.

During the monitoring of removal of existing road and path materials on the south side of Church Street beside the wall of Fort Protector, an 18th century mortar bonded stone culvert was identified. The culvert had been previously disturbed by utilities services and other constructions, but still appeared to carry water during rain periods. Some of the culvert has been piped with concrete drains in recent times. The culvert was constructed in the late 18th century when stone roads were being constructed in Portlaoise to aid trade and commerce.

Archaeological monitoring of works along the east end of Church Street near Fitzmaurice Place resulted in the identification or previously unknown archaeology. Two stone walls and a ditch were identified under the existing path and road near the corner tower of Fort Protector. The walls likely mark the location of a building and artefacts recovered from the area indicate that the building could date to the 16th century. One of the building walls is parallel to the northern wall of Fort Protector. Historic mapping (see 1560 map below) that survives for Portlaoise shows us what the houses in the 16th century would’ve looked like. The houses would have been Tudor style, storey and a half buildings, with thatched roofs, and central hearths or chimneys.

Laois County Council have ensured that the works did not impact on the archaeological walls which were preserved in situ under a protective membrane and sand. 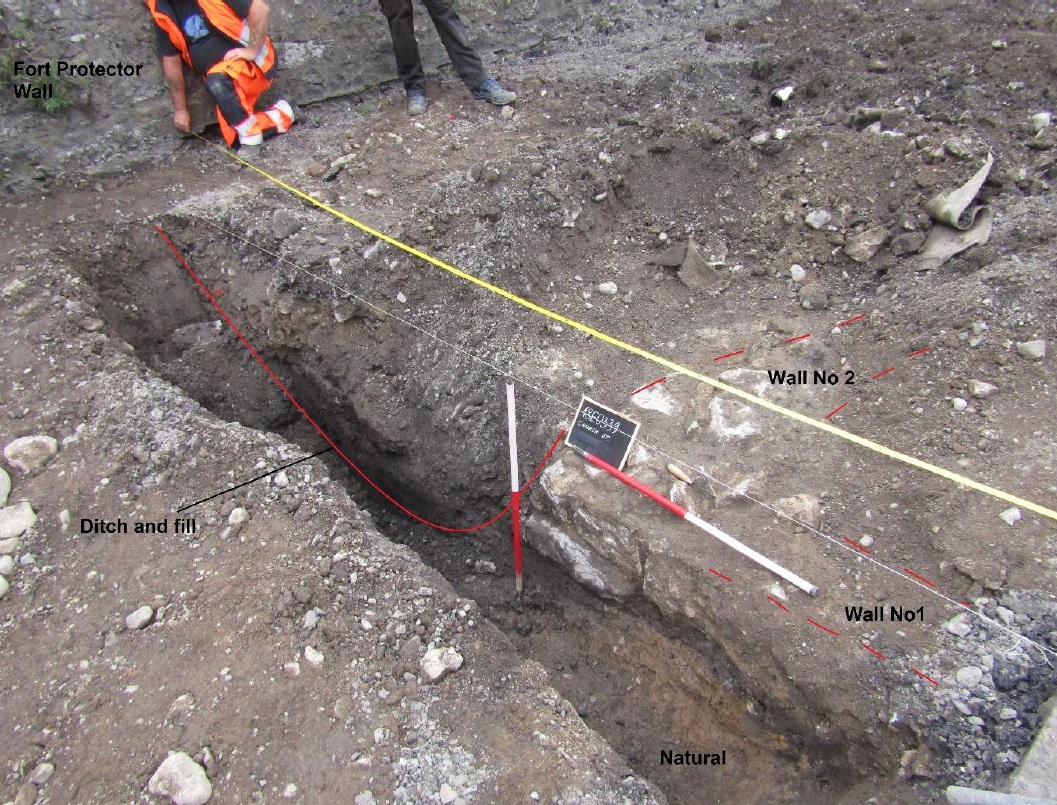 A filled in ditch cutting was also identified at the location of the walls (see image above). The ditch was identified immediately against the north wall of Fort Protector. The ditch had been backfilled with soil and stone. The ditch was likely an external ditch around the outer wall of Fort Protector and may date to the 16th century. Several artefacts were identified and recovered from the ditch fill, including post medieval pottery, animal bone, and a military uniform button (see image below).

The button is a uniform button from the Fourth Royal Irish Dragoon Guards who were stationed in Portlaoise in the end of the 18th century, and mustered to crush the 1798 Rebellion. The button features St. Patricks Cross, and the shamrock, with the Roman Numerals ‘IV’ in the corner indicating the ‘Fourth’ of the regimental name. On the base of the button is the Latin regimental motto ‘Qui separabit’, which translates as ‘who will divide us’. 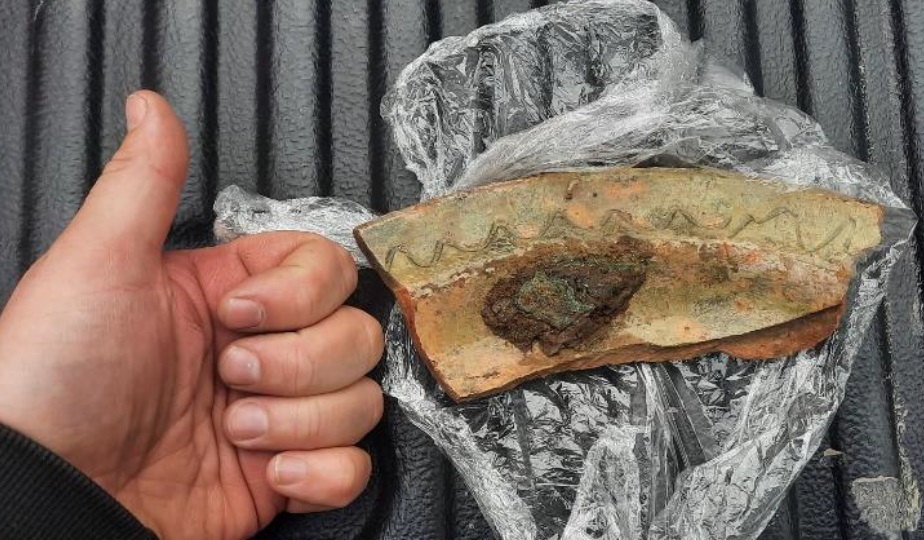 The pottery sherd is from a domestic serving platter and dates to the 16th century. This platter or plate would have been used in one of the homes of the English settlers in Portlaoise.

The ditch and walls are not depicted on any maps of the area, although the 1560 map of Portlaoise (Maryborough) shows a building to the north of the north wall of Fort Protector (see maps below). The stone culvert previously discussed had been constructed in the backfilled ditch, indicating that the ditch predates this construction. A road is depicted at the location of the Church Street on the 1721 Parnell Estate map (see below) and subsequent 19th century Ordnance Survey maps. The presence of roads on these maps at the location of the walls and ditch indicate that the walls and ditch predate the 18th century and based on their location and associated artefacts, date to the 16th century. The walls may represent the remains of one of the first settler homes of the Tudor Plantation of Laois and Offaly. The archaeological monitoring of works has afforded us the opportunity to identify and preserve nearly 500 year old archaeology, and to examine the unique heritage of Portlaoise, as Irelands first plantation town.