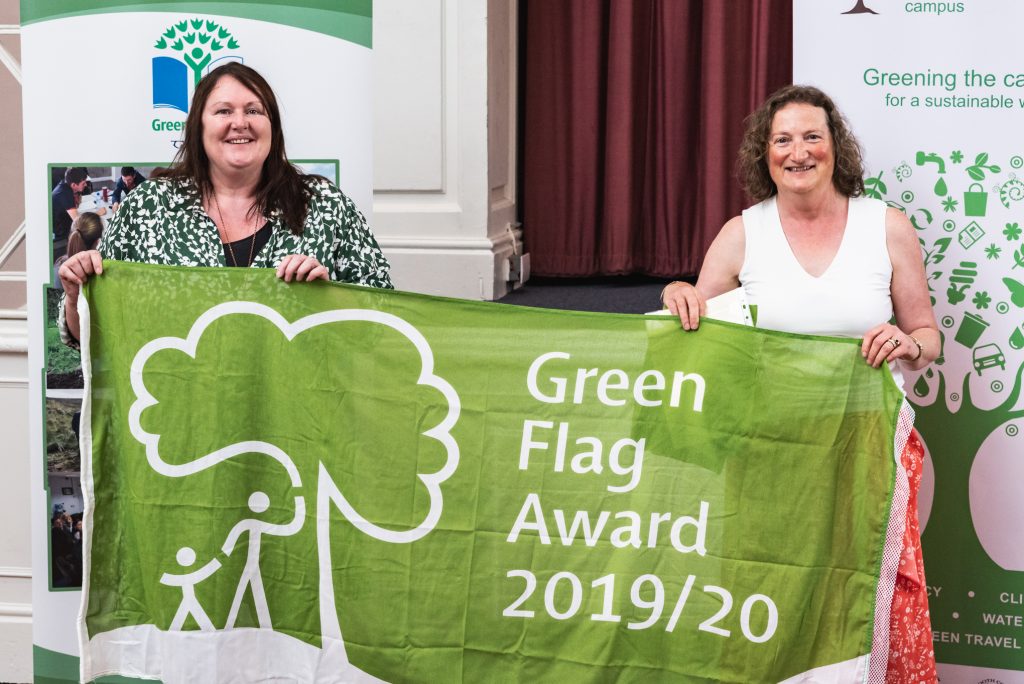 The 2019 Green Flag Awards were Announced Today at Maynooth University

International Accreditation for Park Excellence in Ireland has now expanded to our Historic Cemeteries and University Campuses.

Today saw a huge turnout of over 250 park and garden staff, volunteers, and enthusiasts, converging within the Maynooth University Aula Maxima Hall to witness the 2019 Green Flag Awards for Parks.

Numbers of International Green Flag Award Sites have surged in Ireland this year. New sites to be accredited by teams of trained judges this year include new applicant sites from Counties Limerick and Wicklow, and also Galway and Limerick City.

Only awarded for exceeding tough environmental standards in green space management, and excellence of visitor attractions – the Green Flag Award for Parks is the mark of a quality park or green space and is recognised throughout the world.

Today, An Taisce Environment Education revealed the parks and green spaces that have been awarded a prestigious Green Flag Award for 2019.

A new entrant, and winner for the first time in 2019, it is Maynooth University/Saint Patrick’s College in Maynooth, County Kildare that provided this year’s venue to celebrate the 60 Irish Parks and Gardens from across the Republic of Ireland who are receiving their 2019 Green Flags.

From among 17 countries whose parks met the standard this year there were more Green Flag Awards secured by Irish Parks and Gardens than by any country, other than the UK where the scheme originated in 1996.

The 2019 awards were available to public town parks, country parks, gardens, cemeteries, and green spaces from across the whole country.

The Minister for Rural and Community Development; Michael Ring commented that “the Green Flag Community Award is a very welcome addition to the Green Flag Family, and I am happy that my Department supports this element of the Green Flag Award Scheme. The award recognises the effort of communities and volunteers and that is what makes it so special.  As my Department promotes rural and community development; supporting community level projects like community gardens improves the facilities and attractiveness of these communities. We are facilitating people to take positive control on how their communities develop. This Green Flag Community Award and other initiatives in my Department, like Tidy Towns, are valuable in improving the quality of life for people living in rural areas. They also serve to make these communities more attractive to visitors, and in so doing help boost tourism.”

The Green Flag Awards are judged every year by a peer jury of green space experts, who volunteer their time to visit applicant sites and assess them against eight strict criteria, including horticultural standards, cleanliness, sustainability, and community involvement.In Ireland the Green Flag Award for Parks Scheme has been enthusiastically received by park management as it delivers major wins for the delivery of quality green spaces by respective parks and park departments. These include:

Robert Moss also noted that the Green Flag Community Award is supported by the Department of Rural and Community Development because “it builds a very constructive conduit for information, knowledge and skill share between the professional and voluntary green space management sectors within our society”.

Four of the 2019 Green Flag Award winning parks were also identified by the National Biodiversity Data Centre for an additional Pollinator Project Award. This award is specifically for those Green Flag Parks or Gardens that have made an effort to support the local pollinating insect populations, or to promote their importance. The Pollinator Project Award is jointly run with An Taisce Environmental Education to support the All Ireland Pollinator Plan, and is kindly sponsored by Young’s Nurseries. While there are pollinator project awards across different park categories it was Malahide Castle Demesne,operated by Fingal County Council,that was the overall winner. This site features not only pollinator friendly planting and gardening, but also makes a great effort to educate the public and to promote these efforts through its website and social media.

If you are interested in finding out further information about the Green Flag Award or other programmes run by An Taisce Environmental Education please e-mail us at rmoss@eeu.antaisce.org or telephone:  01 4002212 or 086 3579663