Up until 1939 there was no formal fire service in Co. Laois. Several volunteer units existed , these were unpaid and not accountable to anyone and just served the local community in which they were set up.

In 1939 with the start of WW2, the Air Raid Precautions Act 1939 required Local Authorities to establish fire brigades to extinguish fires in towns with populations of 4,000 persons and over. Therefore the only town required to have a fire brigade was Portlaoise. The Fire Brigades Act 1940 further increased and strengthened the fire brigades and remained the primary fire service legislation until replaced by the Fire Services Act 1981.

Portlaoise was equipped with trailer pump and other items of equipment, and this trailer was located in Aird’s Yard on the Lower Main Street close to where Shaws shop is now located.

The only method of towing the trailer pump was by hackney car and several of the hackney cars in the town were fitted with tow bars to pull the trailer pump. However if the car was unavailable the crew had to either wait for the car or push the trailer themselves.Other units were established throughout the county in locations where the volunteer units existed. These units were equipped with hand carts manufactured by Russell Brothers of Portarlington. The carts carried five lengths of canvas hose, a ladder , two buckets and a standpipe, key and bar. These early units were known locally as “ladder and bucket brigades” and were pushed by the firemen to the fire.

After the war surplus trailer pumps were purchased form Great Britain and saw the establishment of the fire brigade on a countywide basis. Portlaoise acquired what were now recognize as a proper fire appliance.

In 1956 seven landrover fire appliances were purchased for £1200 each. Each land rover was fitted with a pump, a water tank and a first aid hose line. Each landrover also carried several lengths of canvas hose and assorted branch pipes. As the years went on these vehicles were augmented with the purchase of what we now recognize as fire appliance. 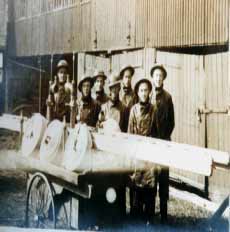 Mobilization of the crew was another problem in the early years as the air raid siren was not yet in use. The crew were called out by someone informing a member of the crew of a fire. This fireman then ran to the next fireman’s house or place of employment to tell him of the fire. He ran to the next house and so on. This is the reason the fire brigade took over twenty minutes to arrive at the scene of the fire at the Courthouse on the Main Street, Portlaoise in 1945, a distance of only a few hundred yards.

After the war surplus air raid sirens were purchase form Great Britain and located in each town that has a fire brigade. This happened throughout Ireland and was the standard method of alerting firemen to a fire. Up until the 1970’s the siren going off in the town told the locals that the fire brigade was needed.
The first modern alerting system using pagers was introduce into County Laois in the 1960’s for Portlaoise. However the remainder of the county was still using the air raid siren for another few years.