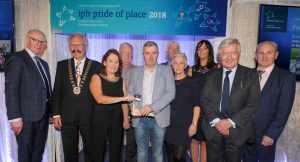 Representatives from Killeshin, Co Laois, scoop their award for the 300-1000 Population category, at the IPB ‘Pride of Place’ awards ceremony in association with Co-operation Ireland at City Hall, Cork on Saturday 17th November, 2018.

Killeshin are this week celebrating their Runner up prize at the IPB Pride of Place Awards hosted by Cork City Council and Co-operation Ireland held on Saturday night in Cork City Hall.  The award was received by Laurence Phelan, Trish Phelan, Mike Moran and Claire McHugh from Killeshin.  The award recognises the extraordinary community spirit and level of activity in Killeshin.

Killeshin is a small rural community village on the Laois/Carlow border. Transformation of their village centre has been their focus for a number of years; the fruit of their labour can be seen in a vibrant community hub which now employs 63 people, from their community centre, community organisations and local businesses, to Saplings School for Children with Autism, a recent addition to their village.

Killeshin Community Centre, central to all local activity, provides space for pre/after-school services, also sports and social/parish gatherings. It won’t stop there; their community planning process is ongoing. With the local agency and Council support, they are working to further develop in a real and sustainable way, for the benefit of both present and future Killeshin generations.  Killeshin is a community that looks after the old, nurtures the young and the vulnerable and cherishes its heritage and culture. From drama to pipe bands, this little community has much to offer not only its residents but also neighbouring localities and the wider community in Co. Laois.

The annual competition, described as the ‘Oscars of the Community Sector’, celebrates the often unsung work of community groups that selflessly work to make local neighbourhoods a better place to live in, work in or visit. Organised by Co-Operation Ireland and sponsored by IPB Insurance, the Pride of Place awards sees the country’s local authorities, on both sides of the border, nominate outstanding projects that contribute to civic pride.

Congratulations also goes to SVT Activity & Wellness Hub who also represented Laois in the Community Wellness category and did their community proud!  The SVT Activity & Wellness HUB is a vibrant, energetic, inclusive hub in its second year, that links 3 communities in a rural parish in Co. Laois. The HUB promotes all physical activities in the Stradbally, Vicarstown and Timahoe areas while also ensuring the health & wellbeing and social needs of the communities are reflected. 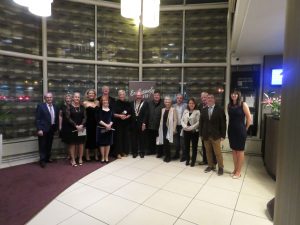 The 16th annual IPB Pride of Place Awards in association with Co-operation Ireland highlights the commitment to supporting active community groups who undertake initiatives to improve their communities and regions.

The awards are the pinnacle of the annual competition, which recognises the work community organisations do for their local society. Each year councils and local authorities from across the island of Ireland nominate groups in their area, who they believe have made an outstanding contribution to supporting and strengthening their local community.

During the ceremony, awards were announced in the main competition, the cities competition and special awards, ranging from groups supporting small rural communities to those involved in large inner city housing estates.  Cork City Council hosted the evening and guests were entertained by PRODIJIG during the interval.  Evelyn Grant was MC for the ceremony.

Sponsored by IPB Insurance, the Pride of Place competition was initiated 16 years ago through a Co-operation Ireland programme to acknowledge the invaluable work undertaken by communities and groups across the island of Ireland. It has grown into the largest competition recognising community development achievements.