2020 Although the Laois Youth Theatre annual production could not take place,  weekly youth theatre workshops continued online, via Zoom. The youth theatre had an opportunity to participate in the online Creative Ireland Laois Cruinnú na nOg multi-strand video, entitled A Sense of Place, that was broadcast on Y0uTube. In addition members of Laois Youth Theatre participated, via zoom, in the Kilkenny Drama Festival in early July.  The Mountrath (grant aided and supported by the Arts Office) continued  to meet throughout the year.

In 2019 and into 2020 The Laois Youth Theatre was based at the Laois Music Centre, (Old Scoil Mhuire), Church Street, Portlaoise.  New members are always welcome so If you are interested in drama, making plays, learning creative skills and meeting new people, this is the opportunity for you.  Members range from 1st year to sixth year students.

Laois Youth Theatre, supports opportunities for new experiences and encourages creativity and skills development Affiliated to Youth Drama Ireland, our members are offered the prospect of travelling to theatre shows,  networking nationally with other Youth Theatres, participate in local festivals, collaborate with other youth theatre groups locally and nationally and prepare for an end of year performance.

Established for over twenty five years, many of our past members have gone on to study and pursue careers in theatre nationally and internationally. 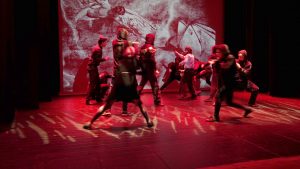 A scene from ” The Black Eyes” a play by Portlaoise Youth Theatre , at the Laois Youth Theatre Afternoon of Drama in the Dunamaise Arts Centre. Photo: Michael Scully

The Fee for the year is €100 to be paid in two installments of €50 [payment of first installment of €50 is required at first full workshop] T:  057 8664033/13 or email: artsoff@laoiscoco.ie for more information or check out our Facebook page www.facebook.com/laoisyouththeatre or www.laois.ie 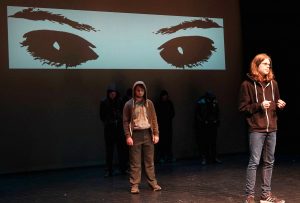 A scene from ” The Black Eyes” a play by Portlaoise Youth Theatre , at the Laois Youth Theatre Afternoon of Drama in the Dunamaise Arts Centre. Photo: Michael Scully 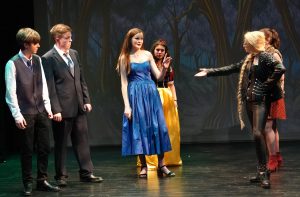 A scene from ” Grimm Fairytales” a play by Portlaoise Youth Theatre , at the Laois Youth Theatre Afternoon of Drama in the Dunamaise Arts Centre. Photo: Michael Scully

Members of Laois Youth Theatre in Portlaoise showcased their talents with performances of plays on Saturday 19th May  in the Dunamaise Arts Centre.

The Laois Youth Theatre Junior Group presented Grimm Fairytales -The Adventures of The Brothers Grimm By John Morton. A fun filled adventure in a search for a mythical book of stories that would give its owner great powers  with characters; Prince Charming and his vicious minions Red Riding Hood, Rapunzel and Goldilocks in a chase throught the enchanted forest.

The Senior group presented ‘The Black Eyes’, written by Bev Clark,  a one act play based upon a popular urban myth that originated in the 20th Century in the USA. The play utilises elements of horror, physical theatre and ensemble work.

Producer and director of the plays Mirjana Rendulic the Youth Theatre Drama tutor was assisted  by Natalia Podvisevschii and volunteer Dylan Kerry  with Eben Fitzsimons Forrester taking on the role of technical assistant.

Laois Youth Theatre has a non competitive ethos and is open to all.  The aim is to enhance the personal and social development of young people through their voluntary participation in weekly planned Youth Theatre programmes resulting in an end of year performance for family and friends to enjoy.

The Laois Youth Theatre junior and senior groups hosted a thoroughly enjoyable afternoon of theatre in the Dunamaise Arts Centre  on Sunday (14TH May).

A large number of friends and family turned up to witness a very high quality theatre event. The junior members performed an abridged version of Around the World in 80 Days, by Philip Brennan and Stephen Colfer. The backdrop projections brought us to each location in the play and added immensely to the experience. This was designed by Nick Anton, Technical manager at the Dunamaise.

The acting was very impressive all around with the young actors presenting their characters credibly. 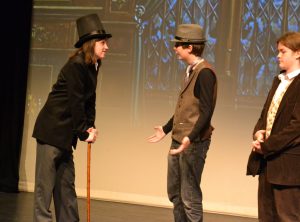 The senior group presented Wrap up Warm, a play they devised themselves, it was an intriguing mystery which showcased their talents to the upmost. Again, the group performed to a very high standard. The props and costumes in both shows were provided by the actors. The poster was designed by Isobelle Kelly one of the members of the one of the senior group.

The directors for this production were Coordinators Siobhan Coffey and Mirjana Rendulic and they were assisted by Aisling Mc Donald.

Young people interested in joining are asked to email the Arts Office at artsoff@laoiscoco.ie or T: 057 8664033/13.

In July of 2016 a small group of the members also presented CHERISH, a poignant performance tribute to the short lives of the children who perished during Easter week 1916 as partof the county’s Centenary Commemoration Programme.

In the production the group took a re-imagined glance back to catch the whispered echoes of these young lives that were so violently lost. Forty young girls and boys, aged 16 and under, whose lives and deaths, until recently, went unrecognised, whose bodies were largely buried in unmarked graves. Forty young children whose dreams and aspirations, whose august destinies, were squandered in the newly declared Republic…

CHERISH is a physical theatre piece that takes its inspiration from Joe Duffy’s book – “Children of the Rising” and was devised by the youth theatre during the summer two-week long drama workshop. The outdoor performance of CHERISH, directed by Siobhán Coffey, took place on Friday 29th July in Fitzmaurice Place, Portlaoise. One of the audience commented following the performance “there was a part when all fell silent but for the wind blowing the bunting and the quiet movement of the children – it was just magical.”

On foot of the CHERISH performance, Laois Youth Theatre received an invitation from Youth Work Ireland to perform at a Youth Arts Showcase in the Autumn and Joe Duffy was busy tweeting about the performance and clips of the film can be seen on YouTube.

Established for over twenty years , Laois Youth Theatre is a quality youth arts programme that supports opportunities and experiences for learning, creativity and developing skills. New members are always welcome to join.