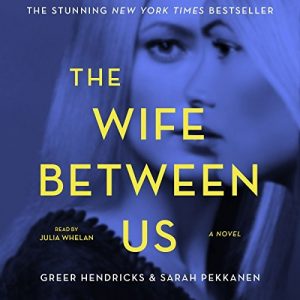 Greer Hendricks – The Wife Between Us

The old unreliable author thriller finds a new voice. If you enjoyed Gone Girl, this domestic thriller is for you. 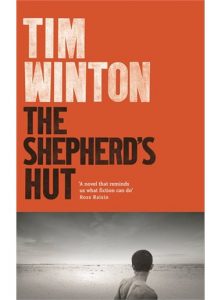 Master storyteller Tim Winton delivers a tender and raw meditation on masculinity and power, violence and self-restraint, and on forgiveness and kindness as the ultimate acts of love.Jaxie dreads going home. His mother’s dead, the old man beats him without mercy, and he doesn’t know how much more he can take. Then, in one terrible moment of violence, the life he’s known ends – forcing Jaxie to flee his sleepy hometown. He’s not just running from the cops; he’s headed north for the only person in the world who understands him.Carrying with him only a rifle and a water jug, Jaxie traverses the vast, bare West Australian wheatbelt, staying out of sight long enough to reach the refuge of the salt country at the edge of the desert. But once he discovers he’s not alone out there, all Jaxie’s plans go awry.He meets a fellow exile, the ruined priest Fintan MacGillis, a man he’s never certain he can trust, but on whom his life will soon depend. And what he finds out there will challenge everything he’s ever thought about himself, about what’s right and wrong, about love and death and survival. And it will haunt him forever.The Shepherd’s Hut is an exquisite coming of age novel, with action that turns on the edge of a knife and an anti-hero who will break your heart. 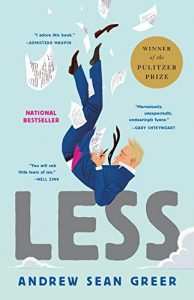 What would possibly go wrong? Arthur Less will almost fall in love in Paris, almost fall to his death in Berlin, barely escape to a Moroccan ski chalet from a Saharan sandstorm, accidentally book himself as the (only) writer-in-residence at a Christian Retreat Center in Southern India, and encounter, on a desert island in the Arabian Sea, the last person on Earth he wants to face. Somewhere in there: he will turn fifty. Through it all, there is his first love. And there is his last. 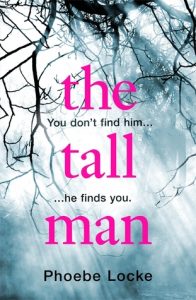 If you read just one psychological suspense novel this year, this month, this week or until 4am today (or if you’re looking for your next fix of psychological suspense thriller) , make it Phoebe Locke’s The Tall Man. A Creepy legend, the disappearance of a young mother and a teenage girl acquitted of murder… Sounds good to me.

The Tall Man is an addictive and unforgettable blend of psychological suspense and spine-tingling chills that will be perfect for fans of Stephen King, Ruth Ware, Sarah Pinborough’s Behind Her Eyes. If you love Stranger Things, prepare to be haunted by The Tall Man. 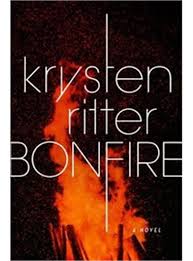 Nothing burns as bright as the truth.

Ten years have passed since Abby Williams left home and scrubbed away all evidence of her small town roots. Now working as an environmental lawyer in Chicago, she has a thriving career, a modern apartment, and her pick of meaningless one-night stands.

But when a new case takes her back home to Barrens, Indiana, the life Abby painstakingly created begins to crack. Tasked with investigating Optimal Plastics, the town’s economic heart, she begins to find strange connections to a decade-old scandal involving the popular Kaycee Mitchell and her friends—just before Kaycee disappeared for good.

You think you know the story of missing Kaycee and the mystery that surrounds the small town of The Barrens, but the book will keep you guessing from chapter to chapter as main character Abby investigates the wrong doings.

With tantalising twists, slow-burning suspense an introverted and not fully reliable narrator, who may or may not be losing, and a remote, rural town of five claustrophobic miles. Bonfire is a dark exploration of what happens when your past and present collide.

Recommended for fans of Girl on a Train. 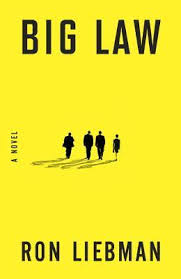 As a young partner at Dunn & Sullivan, one of New York’s most prestigious law firms, Carney Blake has represented dozens of high-profile clients. But being a pawn of Big Law often means defending the corporate dirt bags of the world—the spillers, the drillers, and the killers. Morality aside, Carney is starting to make a name for himself.

So when Carney is suddenly asked by his firm’s chairman to represent the plaintiffs in a class action lawsuit—and not, as usual, the corporate bad guys—he warily accepts. Maybe they’re turning a corner, he thinks. But Carney can’t fool himself for very long. As he digs deeper into the case, he uncovers corruption and maliciously orchestrated schemes that go straight to the top of Dunn & Sullivan. 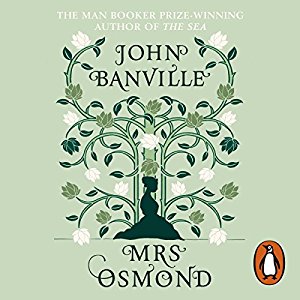 Having fled Rome and a stultifying marriage, Isabel Osmond is in London, brooding on the recent disclosure of her husband’s shocking, years-long betrayal of her. What should she do now, and which way should she turn, in the emotional labyrinth where she has been trapped for so long? Reawakened by grief and the knowledge of having been grievously wronged, she determines to resume her youthful quest for freedom and independence.

Soon Isabel must return to Italy and confront her husband, and seek to break his powerful hold on her. But will she succeed in outwitting him, and securing her revenge?

Mrs Osmond is a masterly novel of betrayal, corruption and moral ambiguity, from the Man Booker Prize-winning author of The Sea.

A worthy sequel to The Portrait of a Lady by Henry James, Banville recreates James’s atmosphere and pacing, a brilliant feat of literary ventriloquism. 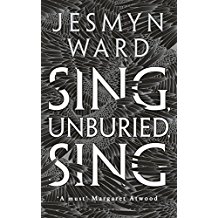 ‘This wrenching new novel by Jesmyn Ward digs deep into the not-buried heart of the American nightmare. A must’ Margaret Atwood

‘A powerfully alive novel haunted by ghosts; a road trip where people can go but they can never leave; a visceral and intimate drama that plays out like a grand epic, Sing, Unburied, Sing is staggering’ Marlon James, Winner of the Man Booker Prize 2015

An intimate portrait of a family and an epic tale of hope and struggle, Sing, Unburied, Singexamines the ugly truths at the heart of the American story and the power – and limitations – of family bonds. 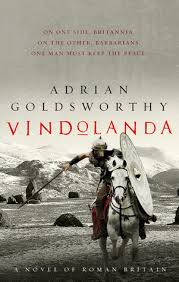 AD 98, Vindolanda. A fort on the edge of the roman world.

The bustling army base at Vindolanda lies on the northern frontier of Britannia and the entire Roman world. In just over twenty years time, Emperor Hadrian will build his wall. But for now defences are weak as local tribes rebel against Rome.

It falls to Flavius Ferox, Briton and Roman centurion, to keep the peace. But it will take more than just a soldier’s courage to survive life in Roman Britain.

Whilst the books clearly owes a lot to the “Last of the Mohicans” and even boys’ adventure books, the genius of this fiction is to take genuine archaeological discoveries (a tablet found at the site of Vindolanda) and contemporary historical sources and stick them in the context of a ripping adventure set a generation prior to the construction of Hadrian’s Wall. This is a hugely authentic historical novel, written by one of Britain’s leading historians. 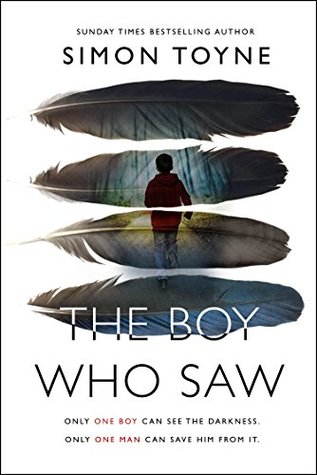 Simon Toyne – The Boy who saw

Only one boy can see the darkness. Only one man can save him from it.

A Murder
An elderly tailor is found tortured and murdered in the ancient town of Cordes. Written in blood beside the body are the words: FINISHING WHAT WAS BEGUN.

A Secret
But the dead man has left a cryptic message for his granddaughter and her son, Leo – one that puts them in immediate danger.

A Race
They are forced to go on the run, accompanied by the enigmatic Solomon Creed. What began as small-town murder becomes a race to uncover a devastating secret dating from World War II. The few men who know the truth are being killed by a powerful organization, and only one man stands in its way.

Only Solomon Creed can stop the murders.
Only he can save the boy. 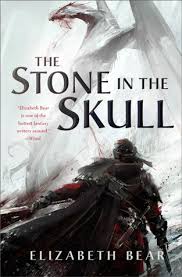 Elizabeth Bear – The Stone in the Skull

The Stone in the Skull, the first volume in her new trilogy, takes readers over the dangerous mountain passes of the Steles of the Sky and south into the Lotus Kingdoms.

The Gage is a brass automaton created by a wizard of Messaline around the core of a human being. His wizard is long dead, and he works as a mercenary. He is carrying a message from the most powerful sorcerer of Messaline to the Rajni of the Lotus Kingdom. With him is The Dead Man, a bitter survivor of the body guard of the deposed Uthman Caliphate, protecting the message and the Gage. They are friends, of a peculiar sort.

They are walking into a dynastic war between the rulers of the shattered bits of a once great Empire.

One of the best and most original female authors working today in speculative fiction. 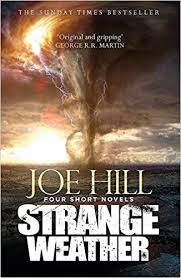 Winner of The Bram Stoker Award for Best Collection

Four short novels from the author of THE FIREMAN and HORNS, ranging from creepy horror to powerful explorations of our modern society.

One autumnal day in Boulder, Colorado, the clouds open up in a downpour of nails, splinters of bright crystal that tear apart anyone who isn’t safely under cover. ‘Rain’ explores this escalating apocalyptic event, as clouds of nails spread out across the country and the world. Amidst the chaos, a girl studying law enforcement takes it upon herself to resolve a series of almost trivial mysteries . . . apparently harmless puzzles that turn out to have lethal answers.

In ‘Loaded’ a mall security guard heroically stops a mass shooting and becomes a hero to the modern gun movement. Under the hot glare of the spotlights, though, his story begins to unravel, taking his sanity with it…

‘Snapshot, 1988’ tells the story of an kid in Silicon Valley who finds himself threatened by The Phoenician, a tattooed thug who possesses a Polaroid that can steal memories…

And in ‘Aloft’ a young man takes to the skies to experience parachuting for the first time . . . and winds up a castaway on an impossibly solid cloud, a Prospero’s island of roiling vapour that seems animated by a mind of its own.

If you enjoy Stephen King books, you’re sure to love the Joe Hill’s books. Like father like son.